"We have the truth on our side! We will be the winners!"

Those words ended the speech of Vladimir Putin at the "United Russia" congress last November. They were also part of one of Josef Stalin's most famous speeches for the Soviet public from June, 22 in 1941. While people in Poland fight media censorship, fearing the control they suffered under communism, while Albanians and Hungarians commemorate their victims of Soviet rule, Josef Stalin is still popular enough in Russia that Putin is capitalizing on his image as a great leader.

Eastern Europeans may have wrenched off the suffocating shroud of communism 22 years ago, but they have not forgotten the weight of it on their backs. Rejection of communist control still raises emotions today.

An international copyright treaty drove Eastern Europeans to the streets in protest starting last month in Poland. The Anti-Counterfeiting Trade Agreement (ACTA), meant to fight copyright infringement and intellectual property theft, including online piracy, was seen as a doorway to Internet surveillance. After years of rule by the communists, people in Poland and the Czech Republic were not going to allow any more control of their media.

"Most of the people who have gone to the streets are young and don't remember communism themselves, but Polish society as an entity remembers," said Jaroslaw Lipszyc, the president of the Modern Poland Foundation, which promotes the education of the Polish public. "In Poland freedom of speech is of special value, and there is a history of fighting for it."

Albania's National Museum has taken the 21st anniversary of the day communist dictator Enver Hoxha's s 20-foot tall statue was knocked over in February of 1991 to open a new wing to remember the suffering of Albanians under communist rule. Photographs of mass graves are on display in the new wing, along with handcuffs and chains and other memorabilia to remind visitors of the thousands of Albanians who were imprisoned and sent to hard labor camps during the communist holocaust in their country.

The bitter taste of communism still lingers in the mouths of Hungarians as well. On Sunday, Hungary as a nation mourned the victims of years of communist rule. Flowers and candles covered the entrance to the House of Terror Museum on Andrassy Boulevard in Budapest, where President Pal Schmitt and his wife lit symbolic candles along with other Hungarians. State Secretary for Justice Bence Retvari addressed crowds in western Hungary, calling communism "an immensely deep well of human evilness" from which those who operated the system drew daily.

Then there is Russia, where Putin's willingness to connect himself to Stalin is considered a reasonable campaign move.

There's a logic behind Putin's strategy; in 2008, the Russian Rossiya television channel declared that Josef Stalin had been voted Russia's third-greatest historical figure. 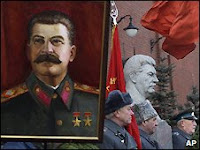 Stalin did not come in number #1 of course, but his inclusion in the list of top "greats" demonstrated serious admiration by the Russian people. In fact, Stalin was at the top of the list at one point, until the producer asked people to please vote for somebody else, according to the BBC. More than fifty million people across Russia voted by phone, Internet, or text message over a period of six months.

There is concern not just that Putin wants to appeal to the communists in Russia, but that he apparently is not afraid it will backfire on him. He's using Stalin to enhance his image, according to the general director of the Political Information Centre, Aleksey Muhin, and it's working for him.

The Cold War is largely over. The Berlin Wall has been torn down and now sits on countless bookshelves in bits and pieces. The fear of the communist threat has dimmed in the West, and students graduating from today's universities were not even alive when the Soviet Union fell. The propaganda machine of communism is not dead, however, and because the fear is less tangible, there is the chance that people may forget how truly terrible the threat of communism continues to be.

For a reminder, we need to just look to North Korea, one of the most oppressed nations in the world. The shrewd propaganda on which communism depends still survives in Pyongyang, and we should be highly wary of its diabolically masterful ability to twist minds and hearts. By rewarding the "good" Communist Party members with affluence, anesthetizing their reasoning and keeping them sedate to the misery around them, and by holding the rest of the populace in a vice of terror, the cult of leader-worship is maintained.

If communist propaganda is cunning enough to prop up the regime in North Korea, where people are starving and dying in death camps and crushed under government control, we should not underestimate its ability to draw in those in the West easily sedated by its calming enticements.

Of all the truly wretched ideas promulgated during the 20th century, Marxism is one of the very worst. On the front, communism is one of those ideas that sounds utopian, but ends up a tool for godless tyrants and despots.

In his expose, 10 Books That Screwed Up The World, Benjamin Wiker writes,

"The Communist Manifesto could win the award for the most malicious book ever written. Now that we have more accurate calculations of corpses—perhaps upwards of 100,000,000—even the tenured Marxists are a bit squeamish about tooting the Manifesto as a horn of plenty."

Wiker has a sense of humor. "Tenured Marxists" refers of course to those Western university professors who still promote communist ideals in their classes, despite the utter failure of the Marxist dream.

What is the matter with Marxism anyway? It sounds wonderful—everybody owning the world in common, sharing the products of their labor with no class struggle and equality for all. Either Lenin and Stalin, Mao, Pol Pot and their fellows got it all wrong…or… something is inherently wrong with Marx's philosophy.

Marx vs. the Bible

The fundamental problem with Marxism is that it is based in materialistic atheism and attempts to build a utopia without God. It's the Tower of Babel, an effort to reach Heaven by the power of man and not by the grace of the Creator. Such efforts will always fail, because they reject basic biblical spiritual principles. If engineers reject the laws of physics when building a bridge, it will collapse, and when men try to build societies while rejecting the laws of God, those societies will also self-destruct.

Marx says we must reject the idea of private property.

Marx says we must condemn the bourgeois and through violent revolution snatch their property for the common man.

Marx says that there is no God.

The Bible says "For the LORD is great, and greatly to be praised: he is to be feared above all gods. For all the gods of the nations are idols: but the LORD made the heavens" (Psalm 96:4-5).

Marx says that the material world is all that matters. Humans are merely material, not spiritual, animals. They have only as much value as their ability to produce for the Community.

Stalin's purges, his horrendous disregard for human life, his tyranny are all a direct result of his Marxist philosophical views. If only the Community matters, and if human beings have no intrinsic value, then it is logically defensible to slaughter those millions who are perceived as threats to the utopian ideal and therefore to the Community. If there is no God, then human reason is the only yardstick for morality, and that yardstick can be used to beat others into submission to a dictator's insane will.

If Russians forget the terror of Stalin, perhaps the people of Hungary and Albania and Poland will take time to remind them that there were more deaths to Stalin's legacy than were spent in defeating Hitler. If the world forgets the terror of communism, perhaps the people of North Korea will one day have the freedom to shout about it loudly. Until then, we need to inform our young people and teach them to look at the results of certain philosophies and not merely listen to their soft words.

Socialism is Not Compassionate, and Why This Should Matter to Christians • Faith Facts