Turkey Will Not Allow NATO to Share Intelligence with Israel

Rapidly Islamizing Turkey ratchets up its new hostility to Israel. Will this result in its removal from NATO? Almost certainly not, as long as Barack Obama is president. "Turkey will not allow NATO to share intelligence with Israel," from AFP, February 17:


Turkey will never allow any third country, particularly Israel, to use intelligence obtained by a NATO radar system, its foreign minister said on Friday. 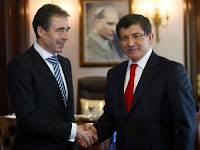 "We will never allow any third country to use any NATO facility. Our position will be even more clear if it is particularly Israel," Davutoglu told a joint news conference with visiting NATO chief Anders Fogh Rasmussen in Ankara.

His remarks came after some media outlets reported that the United States and Israel have carried out a joint missile test by using intelligence gathered by a NATO radar system based in eastern Turkey.

Last year Ankara decided to host in a military facility base near Malatya in the southeast an early warning radar as part of NATO's defense architecture.

"It is a NATO system and we appreciate that Turkey has agreed to host one of the facilities," said Rasmussen.

"Data are shared within our alliance among the allies. It is a defence system to protect the populations of NATO allies," he added without mentioning Israel, which is not a NATO member.

Turkey's relations with one-time regional ally Israel plunged into deep crisis in 2010 when Israeli forces killed nine Turks in a raid on a Turkish ferry, part of an activist flotilla seeking to breach Israel's naval blockade of Gaza.

In 2011, Turkey expelled the Israeli ambassador and axed military ties and defence trade after Israel's refusal to apologise and compensate the flotilla victims...

Israel to Get No Data from NATO’s Shield • Turkish Weekly