Let There Be No Mistake About Iran's Nuclear Intentions

The diplomatic chatter over an Israeli strike against Iran's nuclear program has reached new heights. There have been several secret meetings in the past week related to the topic. Israel has also sent out an order putting "Israeli facilities in North America and around the world...on high alert." According to an internal security document obtained by ABC News, "We predict that the threat on our sites around the world will increase...on both our guarded sites and 'soft' sites." 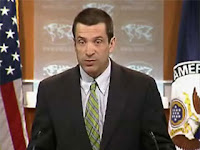 Probably the clearest indication that a strike is getting very near is the Obama administration publicly squabbling with Israel about the need for more time to allow diplomacy and sanctions to work. “There is still time and space to pursue diplomacy with Iran over its nuclear program," said State Department spokesman Mark Toner. He added that the U.S. “is absolutely committed to preventing Iran from getting nuclear weapons.”

U.S. Defense Secretary Leon Panetta even gave a time frame for when an attack might take place. He said, "There is a strong likelihood that Israel will strike Iran in April, May, or June before Iran enters what Israelis describe as a 'zone of immunity' to commence building a nuclear bomb."

It's a bit of a quandary why Panetta would offer this time window. Since America is one of Israel's closest allies, you wouldn't expect our military chief to let the cat out of the bag on such a vital military operation. There are two possibilities:

The one thing that has been holding back the calls for immediate military action is Iran's claim that its nuclear program is only for the production of electrical power. Since Iran has a 100-year supply of cheap oil, it is ridiculous for Tehran to claim it needs nuclear energy to power its cities. Iran would have a better argument if it said the desire to switch to atomic energy was part of an attempt to cut back on greenhouse gas emissions.

Iran's willingness to suffer economic pain is more proof of its commitment to developing a bomb. The sanctions placed against Iran have triggered runaway inflation. The rial, Iran's currency, has been in a free-fall against the dollar. The market rate for dollars is now 50 percent below the official rate. The government is so worried about the value of the rial that it has blocked text messages using words like "dollar" and "foreign currency."

There is an ongoing effort to embargo Iranian oil. A plan is now in the works for Japan to cut Iranian crude purchases. Saudi Arabia has promised to increase production to fill the gap. Since oil sales account for about 80 percent of Iran’s foreign revenues, you would think that Tehran would say, "Hey, I guess we don't need nuclear power that badly." Iran's leaders are so stubborn in their position, they have threatened to cut off exports to Europe.

Another sign of Iran's intractable nuclear policy is the huge amount of money it is spending on protecting its nuclear research facilities. President Mahmoud Ahmadinejad has just presented to Parliament a plan to more than double military spending over the coming twelve months. Iran has already been a heavy shopper in the Russian arms market. The Iranian military has conducted an endless series of drills in the past few months.

There isn't going to be any great surprise the day the Israeli air force bombs Iran's nuclear facilities. What will probably be the shock will be how bad the situation will get after the fighting starts. Iran has already promised it would close off the Strait of Hormuz to oil shipping if it was to come under attack. Since they've had over seven years to plan such a move, it's a given that there will be a devastating impact on the flow of one-fifth of the world’s crude.

Iran steps up tension with Gulf war games • The Australian