Whew, did I follow all of this right? I have one more question, this all isn't figurative language is it?

I also did an Internet query on those who stand on the opposite side (who interpret Babylon figuratively). It seems that this has grown to be quite an argument. And there seems to be a lot of scholars in both camps. If Babylon has to be rebuilt before the book of Revelation can be fulfilled then we have lots of time and the end is really far away. I mean after all, we're not just talking about a city being rebuilt here, it also has to grow to a place of social prominence. The reason I started studying the Book of Revelation is because I thought with everything going on in the world today that the end was near. And me being a Christian and all, I thought I better study it and begin to warn people. 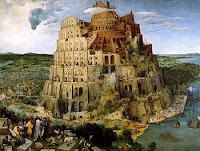 Babylon: The Mother of Harlots

A. Indeed, all of the things you attribute to me as teaching are in fact true—these are all things which the Scriptures reveal concerning aspects of Babylon if we survey both Old and New Testament passages. The key to beginning to grasp the importance of Babylon both historically and prophetically is to understand its role in opposition to God beginning with Babel and then disseminated throughout the cultures of the world at the dispersion of peoples following the introduction of languages in Genesis 11. This is why Babylon is said to be the mother of harlots (Rev. 17:5)—she is the originator of global opposition to God which includes all religious movements and philosophies which deny the truth of the gospel. Thus, she plays the role of the "city of man" in opposition to the "city of God." In some ways, you could say that the Bible is a "tale of two cities"—Babel/Babylon vs. Jerusalem. Although Babylon is portrayed as a corrupting harlot with global and historical influence within the book of Revelation, this does not deny the literal facts of her origin (Babel), influence upon the people of God (carried forward by neo-Babylonia, Medo-Persia, Greece, and Rome), and what appears to be her role as a literal city at the time of the end. Balancing the spiritual truths of her corrupting influence with the literal prophecies concerning her eventual judgment is the constant balancing act of the would-be interpreter who would seek to do justice to all that Scripture reveals concerning the role of this city in opposition to God. Perhaps the material from the section on Babylon from my Revelation commentary will help answer some of your questions.

Although many interpret the book of Revelation as mere symbolic or figurative language, while recognizing the use of symbols and figures of speech, I do not believe we are free to deny the literal aspects of what John wrote. In relation to Babylon, consider the prophecy given by God through Jeremiah (Jer. 51:59-64)—which was delivered at a specific geographic location. Ask yourself if God can uphold His perfect character if what He pronounced at such a specific location to a specific city—and which has not yet happened in all of recorded history—can be fulfilled 'symbolically' or at some other location on the earth? If it can, then God’s word can no longer be trusted as He is a God Who equivocates or could even be said to be disingenuous. Of course Scripture makes plain that God is not so.

Since I'm among those who believe what is stated must be interpreted in line with what is said elsewhere in Scripture—including the meaning the same words have in the Old Testament—I take it to be a literal city occupying the same location with the same name. (This does not deny the related global/historical influence of false religion that went out from the city into all cultures as I discuss in my commentary.) If that is true, as I believe God's character together with the many prophecies concerning the destruction of the city require, then some amount of time would be needed beyond our day in order to rebuild the city and for it to become a prominent commercial center prior to the events recorded during the latter part of the tribulation—especially its destruction.

I would challenge the idea that this necessarily means, as you put it, "we have lots of time and the end is really far away." Considering how rapidly other major cities have been rebuilt following major destructive events such as war, I think we could be surprised how rapidly such a scenario could possibly develop. Perhaps not within the next 5 years, but given a decade or two this seems quite plausible. Doubly so if rebuilding Babylon were to be adopted as a rallying point, the active global expression of a God-rejecting generation reestablishing that which God originally judged as Babel.

One of the errors every generation of Christians risks is trying to force-fit God's prophetic time-table into their own time. This troublesome approach to interpreting the Scriptures has been rightly criticized by some with the disparaging title "newspaper exegesis"—reading modern newspaper events back into the Scriptures. We need to make proper interpretation of the text of Scripture our foundation rather than our perception of world events and how we think they could be fulfilled, often by twisting or torturing the text to such a degree that prophecies which God has anchored using specific names and locations we assert can find fulfillment in some other location or entity (e.g., the city Babylon is not a city or some other city such as New York, San Francisco, London, etc.). This is turning things on their head by looking for fulfillment where it is not to be found and then reinterpreting the Bible to try and make it fit. One of the problems with taking the city of Babylon in Revelation as figurative or symbolic is that there then becomes no bound on what it is considered to represent. (This is also an effective technique employed by cult leaders who prey on those who are not suitably anchored by the actual meaning of the text.)

How much better to consider the Scriptural principle conveyed by Habakkuk 2:2-3:

Then the LORD answered me and said: "Write the vision and make it plain on tablets, that he may run who reads it. For the vision is yet for an appointed time; but at the end it will speak, and it will not lie. Though it tarries, wait for it; because it will surely come, it will not tarry."

Notice that God’s intent is to reveal ("make it plain"—not mysterious) but that the vision is "yet for an appointed time." God, through Habakkuk, tells us in this passage that we need to learn to wait for the appointed time when the prophetic truth will come to pass even though it tarries. It is my view that much prophetic teaching suffers from an unwillingness to wait on God to bring the predicted conditions about. Rather than believing what a passage clearly states, we abandon the clearly communicated details (e.g., a "city" named "Babylon") in favor of speculation because we desire to find fulfillment in a time or manner where it is not to be found. But what is this if not the sin of unbelief?

I prefer to follow in the footsteps of earlier interpreters who went out on a limb in claiming that one day Israel would be back in the land as a sovereign nation. At the time they made such predictions it was considered highly implausible, even laughable. Yet these interpreters believed what a straight-forward interpretation of passages in the OT seemed to indicate. Look at the situation now, ever since 1948! In hindsight it seems simple to believe now, but at the time these who held to such an interpretation were in the minority because it was still over the horizon. Yet they had faith in what the text said and also the necessity of taking the text at face value. And so I believe it will be concerning the literal city of Babylon.

Although, as Christians, we should certainly study and attempt to understand all of Scripture, I'm not motivated to study the book of Revelation because I think the events therein are near. That would mean that I'm watching for Antichrist rather than Christ. Yet the New Testament teaches that the Church is expectantly waiting for our Lord Jesus at the rapture of the Church and won't be present to see the events of the final 7 years prior to His second coming in judgment. The imminence of His arrival (which could occur before I finish writing this sentence) is clearly taught in Scripture. I believe this is by design: His any-moment appearance for the Church is intended to keep our focus on Christ rather than other end-time events.

Regarding the danger of the coming time of tribulation, it seems that we are better served warning people about the dangers of Hell. The tribulation may not come for some time and the worst it can do is lead to death. How much greater the danger unbelievers face every day they continue to reject God's offer of reconciliation through Jesus Christ! Day by day their eternal destiny hangs in the balance since unbelievers live each moment one heart-beat away from eternal damnation in Hell. That's the real danger we should be warning about!