It's Tel Aviv and Not Tehran

Protesters in Libya or Syria or Iran know they are risking a great deal when they take to the streets to demonstrate their griefs. Gaddafi, Assad, and Ahmadinejad have not been particularly gentle in their responses to popular uprisings. People are struggling in Israel as they are elsewhere in the tight-belted world. In Israel, however, as groups of 250,000 march through Tel Aviv and 30,000 demonstrate in Jerusalem, the Prime Minister and Knesset are actually looking to find solutions to the nation's woes. 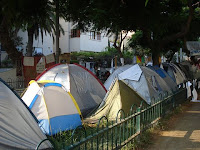 The trouble started about a month ago when a few Israelis set up tents as a way to decry the lack of affordable housing. A sizeable tent city now sits at Rothschild Boulevard in Tel Aviv, and others like it have popped up in a variety of cities where tens and hundreds of thousands of people have joined the demonstrations. The protesters insist that there is a growing disparity between rich and poor in Israel, that the middle class is struggling to make ends meet. They want lower living costs and price controls on basic necessities.

The crowds are crying out for "social justice", yet those leading the protests claim that they are not communists or socialists. There are those both on the left and the right participating in the demonstrations - both men and women, old and young, from both sides of the aisle. Channel 10 television published a poll on Tuesday in which 88 percent of respondents supported the movement, with 46 percent of those voting representing Prime Minister Benjamin Netanyahu's own Likud party.

"It's hard to raise children, it is very hard to find suitable apartments. You just cannot suffer anymore, you just have to come to the streets and protest," a protester named Noga Klinger told CNN.

Netanyahu responded by forming a committee, the "Rothschild Team" to analyze and find solutions for the socioeconomic problems that spurred the protests. The first meeting was held Tuesday afternoon. Netanyahu said that he recognizes the "real distress" in Israel and the need to find "real solutions."

Professor Manuel Trajtenberg of Tel Aviv University, who led the meeting, said, "This wave of protest is expressing a longing for something real, called 'social justice.'" Change, he said, "depends on our ability to listen and to translate public sentiments and into the professional language of politics."

For his part, Netanyhu has expressed willingness to make reforms, but also made clear that the government was committed to staying within the country's budget. The United States lost its AAA credit rating in part due to its massive debt problem, and Netanyahu's government is determined not to go that route. Netanyahu made clear that his government "must act under financial responsibility while making repairs that express social sensitivity."

The protesters have said they do not want to topple the government; they simply want reforms to address significant grievances. The Prime Minister has said he wants his committee to focus on easing the population's economic burden, rehashing the tax burden, expanding access to social services, increasing competition to bring down prices, and implementing a new government housing plan.

The big financial picture in Israel isn't so great, but it's not as bad as it could be. Tel Aviv shares dropped 7 percent in response to the United States' credit rating downgrade on Sunday. The downgrade was not a great surprise, and its possibility has been a factor in Israel's macroeconomic policy, according to a statement from the central bank and finance ministry on Sunday. There was a shock factor, of course, but the macroeconomic health of Israel has been deemed fairly strong considering the world situation.

In the midst of these disturbances, 81 United States congressmen are heading to visit Israel during Congress' summer recess. The 55 Republicans and 26 Democrats will spend a week in the country, sponsored by the American Israel Education Foundation. They will meet with Prime Minister Binyamin Netanyahu and President Shimon Peres in Jerusalem and Palestinian Authority President Mahmoud Abbas in Ramallah. It will be an opportunity for a large number of junior congressmen to visit Israel and deepen their relationships within the country.

Israel has fared a bit better than many countries during the world's financial struggle, but it does not operate in a bubble. Careful maneuvering will be required to get the country through without too many bruises.

At the same time, we note that the protesters have actual tents to put up in their tent cities - which are not, we also note, being bombed regularly with tear gas.