The second section of Matthew 25 is one of the most well-known parables of Jesus. The parable of the faithful and unfaithful stewards continues lessons for the nation of Israel in light of Christ’s return, which was noted in Matthew 24. This parable is often preached on today without notation of its context relating to Israel and Christ’s return. When we examine parallel accounts of this parable (Mark 13:34 and Luke 19:11–27) they both are also in the context of the second coming and judgment. The account in Matthew contains the most extensive version. 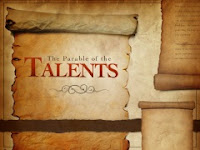 The Parable of the Talents

In keeping with previous parables in Christ’s Discourse, this one deals with the issue of faithfulness. How will a true son of the kingdom act during the time of his master’s absence? Will he be faithful to his lord or will he be a worthless servant? The servants were evaluated for how they dispensed their responsibilities during the absence of their master. Upon the return of the master, those servants that were faithful in the execution of their duties were rewarded with greater responsibility and wealth during the future reign of the king. “So here the heirs of the kingdom will receive greater blessing, while the ones who do not inherit it will be shut off from even an opportunity for entrance,” notes Dr. Toussaint. “Those who do receive rewards will be rewarded according to their faithfulness and not the measure of their work.” [1]

This parable relates to Israel’s accountability before God for their stewardship that will occur in conjunction with Christ's second coming. Dr. Toussaint tells us:

The last three parables give practical instructions in the light of the King’s coming to judge and to reign. The principle which underlies each is the same one which was given in the Sermon on the Mount (Matthew 7:16–21). The fruit of faithfulness and preparedness would indicate the character of those living in the days before His coming. In each parable, character is manifested by works. This thought forms the key to the following passage which deals with the judgment of the nations (Matthew 25:31–46). [2]

Thus, we see that the parables of the ten virgins (25:1–13) and the talents (25:14–30) deal with Israel’s faithfulness in light of her responsibility, while the remainder of Matthew 25 (31–46) deals with Messiah’s judgments of the nations, which will relate to how they treat the Jewish remnant during the tribulation. In both instances, Israel and the nations, there will be a mixed response. Some will be prepared and faithful, while others (most likely most) will not.

In this parable Jesus portrays Himself as the Master of a house who is set to embark on a journey and He gives various responsibilities to His servants. This parable contains all of the basic elements dispensationalists [3] teach are related to the testing of the various ages within God’s plan for history. [4]

A leading spokesman for dispensationalism is Charles Ryrie, who notes that The Oxford English Dictionary defines a theological dispensation as “a stage in a progressive revelation, expressly adapted to the needs of a particular nation or period of time . . . also, the age or period during which a system has prevailed.” [5] The English word “dispensation” translates the Greek noun oikonomía, often rendered “administration” in modern translations. The verb oikonoméô refers to a manager of a household. [6] “In the New Testament,” notes Ryrie, “dispensation means to manage or administer the affairs of a household, as, for example, in the Lord’s story of the unfaithful steward in Luke 16:1-13.” [7]

The Greek word oikonomía is a compound of oíkos meaning “house” and nómos meaning “law.” Taken together “the central idea in the word dispensation is that of managing or administering the affairs of a household.” [8]

Dr. Ryrie formulates the following description and definition of dispensationalism:

Dispensationalism views the world as a household run by God. In this household-world God is dispensing or administering its affairs according to His own will and in various stages of revelation in the process of time. These various stages mark off the distinguishably different economies in the outworking of His total purpose, and these different economies constitute the dispensations. The understanding of God’s differing economies is essential to a proper interpretation of His revelation within those various economies. [10]

The scenario in this parable provides a paradigm for how God manages human history based upon His revelation (the Bible). In spite of Satan and the unbelieving world, God knows what He is doing throughout history. He is in control and even though we currently live in a time when God is allowing mankind to go their own way and do their own thing, judgment day is coming when He will hold mankind accountable for their stewardship towards God.