Revelation 13 and the Abomination of Desolation

And they worshipped the dragon which gave power unto the beast: and they worshipped the beast, saying, Who is like unto the beast? Who is able to make war with him? And there was given unto him a mouth speaking great things and blasphemies; and power was given unto him to continue forty and two months. And he opened his mouth in blasphemy against God, to blaspheme his name, and his tabernacle, and them that dwell in heaven.

Does verse 5 and 6 occur at the abomination of desolation? 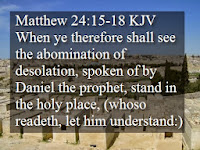 The Abomination of Desolation

This passage also gives us a key piece of information concerning the timing of the ascendancy of the Antichrist: his power is granted for 42 months (for 3 1/2 360-day years). This would appear to correspond to the last half of the 70th week of Daniel (Dan. 9:24-27 cf. Dan. 7:25).

At the midpoint of the Tribulation when the two witnesses have been testifying for 3 1/2 years (Rev. 11:3), the Antichrist arises from the abyss to overthrow them (Rev. 11:7). He then "sits as God in the temple of God showing himself that he is God" (2 Th. 2:4).

Since he is a very busy man and lacks omnipresence, some believe that he will set up the image referred to in Revelation 13:15 which will remain in the Holy Place thereafter. This act of entering the Holy Place and setting up the image is most likely what Jesus had in mind as the abomination of desolation that signals Jews to flee Jerusalem in haste because of the latter half of the Tribulation period is characterized by the severe persecution of the Jews (cf. Revelation 12:13-17).