As the Washington Post pointed out on Friday, US President Barack Obama purposely provoked the current fight with Prime Minister Binyamin Netanyahu. He knew full well that Netanyahu does not back the Palestinian formulation that negotiations with Israel must be based on the indefensible 1949 armistice lines, or what are wrongly referred to as the 1967 lines. In the days leading up to Obama's speech last Thursday, Israel registered explicit, repeated requests that he not adopt the Palestinian position that negotiations should be based on those lines.

And so it was a stinging rebuke when Obama declared Thursday: "The borders of Israel and Palestine should be based on the 1967 lines with mutually agreed swaps." According to the Washington Post, Obama wrote these lines of his speech himself and Netanyahu was informed of them just as he was scheduled to fly to the US on Thursday evening. Obama gave the speech while Netanyahu was in the air on his way to Washington to meet Obama the next morning. It is hard to think of a more stunning insult or a greater display of contempt for the leader of a US ally and fellow democracy than Obama's actions last week. And it is obvious that Netanyahu had no choice but to react forcefully to Obama's provocation.

The question is why would Obama act as he did? What did he wish to accomplish by purposely starting such an ugly fight with Netanyahu?

Probably the best way to figure out what Obama wished to accomplish is to consider what he did accomplish, because the two are undoubtedly related. 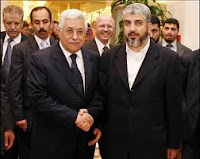 On May 4, two weeks before Obama gave his speech, Fatah and Hamas signed a unity agreement. Hamas is the Palestinian branch of the Muslim Brotherhood. Like its fellow Brotherhood satellite al-Qaida, Hamas shares the Brotherhood's ideology of global jihad, the destruction of Western civilization and the establishment of a global caliphate. Also like al-Qaida, it is a terrorist organization which, since its establishment in 1987 has murdered more than a thousand Israelis.

In 2005, Hamas subcontracted itself out to the Iranian regime. Since then, its men have been trained by the Iranian Revolutionary Guard Corps and by Hezbollah. Hamas maintains operational ties with both outfits and receives most of its weapons and significant funding from Iran.

The agreement between Fatah and Hamas makes Hamas a partner in the leadership of the Palestinian Authority. It also paves the way for Hamas to win the planned Palestinian legislative and presidential elections that are scheduled for September just after the UN General Assembly is scheduled to endorse Palestinian statehood. It also sets the conditions for Hamas to integrate its forces and eventually take over the US trained Palestinian army in Judea and Samaria and to join the PLO.

The Hamas-Fatah unity deal constitutes a complete repudiation of the assumptions informing Obama's policies towards the Palestinians and Israel. Obama perceives the conflict as a direct consequence of two things: prior US administrations' refusal to "put light" between the US and Israel, and Israel's unwillingness to surrender all of the territory it took during the course of the 1967 Six Day War.

The Hamas-Fatah unity deal is indisputable proof that contrary to what Obama believes, the conflict has nothing to do with previous administrations' support for Israel or with Israel's size. It is instead entirely the consequence of the Palestinians' rejection of Israel's right to exist and their commitment to bringing about Israel's destruction.

Forcing Israel into indefensible boundaries, (which as Netanyahu explained to Obama at the White House on Friday, "were not the boundaries of peace, they were the boundaries of repeated wars because the attack on Israel was so attractive for them,"), will not advance the cause of peace. It will advance the Palestinians' goal of destroying Israel.

Obama had two options for contending with the Palestinian unity deal. He could pay attention to it or he could create a distraction in order to ignore it. If he paid attention to it, he would have been forced to disavow his policy of blaming his predecessors in the White House and Israel for the absence of peace. By creating a distraction he would be able to change the subject in a manner that would enable him to maintain those policies.

And so he picked a fight with Netanyahu. And by picking the fight, he created a distraction that has, in fact, changed the subject and enabled Obama to maintain his policies that have been wholly repudiated by the reality of the Palestinian unity deal.

By inserting the citation of the 1949 armistice lines into his speech, Obama made Israel's size again the issue.

The Hamas-Fatah unity deal actually demonstrates that not only is Israel's size not the cause of the conflict, it is the main reason that Israelis and Palestinians live in relative peace.

Israel's control over Judea and Samaria and east Jerusalem, and with them, its ability to ward off invasion and attacks on its major cities is what has prevented wars. If Israel were more vulnerable, the de facto Palestinian terror state would not be weighing whether or not to begin a new terror war as its leaders from Fatah and Hamas are doing today. It would be waging a continuous campaign of terror whose clear aim is Israel's destruction for again, as Netanyahu said the 1949 armistice lines make war an attractive option for Israel's enemies.

By picking a fight with Netanyahu, since Thursday, no one could have possibly noted this basic truth because the false issue of Israel's control over these areas - that is, Israel's size - has dominated the global discourse on the Middle East.

Obama would never have been able to create his diversion from the unwelcome fact of Palestinian duplicity and rejectionism, to the imaginary problem with the size of Israel without the enthusiastic support given to him by the Israeli Left.

Led by opposition leader Tzipi Livni, the Israeli Left responded to Obama's full-scale assault on Israel's legitimacy by launching a full-scale partisan assault on Netanyahu. Rather than back Netanyahu as he fights for the country's future, Livni called for him to resign and said that he was wrecking Israel's ties with the US. In so doing, the Left provided crucial support for Obama's move to maintain his phony anti-Israel paradigm for Middle East policymaking in the face of the Palestinian unity deal's repudiation of that model.

The Left's assault on Netanyahu is not the only way it has enabled Obama to maintain his pro-Palestinian policies in the face of the Palestinians' embrace of terror and war. In his speech to AIPAC, Obama argued that Israel needs to surrender its defensible boundaries because the Palestinians are about to demographically challenge Israel's Jewish majority.

As Obama put it, "The number of Palestinians living west of the Jordan River is growing rapidly and fundamentally reshaping the demographic realities of both Israel and the Palestinian territories. This will make it harder and harder - without a peace deal - to maintain Israel as both a Jewish state and a democratic state."

The demographic time bomb story is a Palestinian fabrication. In 1997, the Palestinian Central Bureau of Statistics published a falsified Palestinian census that inflated Palestinian population data by 50 percent. The Israeli Left adopted this fake report as its own when Palestinian terrorism and political warfare convinced the majority of Israelis that it was unwise to give them any more land and that the peace process was a lie.

Since 2004, repeated, in-depth studies of Jewish and Arab birthrates and immigration/emigration statistics west of the Jordan River undertaken by independent researchers have shown that the demographic time bomb is a dud. In January, the respected demographer Yaakov Faitelson published a study for the Institute of Zionist Strategies in which he definitively put to rest the tale of pending Jewish demographic doom.

As Faitelson demonstrated, Jewish and Arab birth rates are already converging west of the Jordan River at around three children per woman. And whereas the fertility rates of Israeli Arabs, Gazans and residents of Judea and Samaria are all trending downward, Jewish fertility is consistently rising. Moreover, whereas the Arabs are experiencing consistently negative net immigration rates, Jewish net immigration rates are positive and high.

Faitelson based his multiyear projections on current population numbers in which Jews comprise 58.6 percent of the population west of the Jordan River and Muslims constitute 38.7% of the overall population. Non-Jewish, non-Muslim minorities comprise the other 2.7%. Using assessment baselines for Jewish net immigration well below current averages, Faitelson showed that in the years to come, not only will Jews not lose our demographic majority. We will increase it.

Faitelson's study, like the studies published since 2004 by the American-Israeli Demographic Research Group show that from a demographic perspective, Israel is in the same situation as many Western states today. Namely, it has to develop policies for dealing with an irredentist minority population.

There are many reasonable, liberal policies that Israel can adopt. These include applying the liberal Israeli legal code to Judea and Samaria and enforcing the laws of treason. It is hard to see why the best policy for Israel is to take some of that irredentist population off its books by establishing a terror state ruled by what Netanyahu rightly referred to as "the Israeli equivalent of al-Qaida" on its border.

All of this brings us back to Hamas, terrorism, the Palestinian rejection of Israel's right to exist, and Obama's diversionary moves to facilitate his preservation of a Middle East policy based on a wholly false and discredited assessment of reality and the Israeli Left's facilitation of Obama's efforts.

When we realize what Obama is up to, we recognize as well what Netanyahu must do in response.

In his address before Congress on Tuesday and in all of his appearances in the coming weeks and months, Netanyahu should have one goal: to bring the focus of debate back where it belongs - on the Palestinians.

At every opportunity, Netanyahu needs to pound the message that the Palestinians' commitment to Israel's destruction is the sole reason that there is no peace.

As for the Israeli Left, it is high time that Netanyahu place the likes of Livni on the defensive. Netanyahu must attack the Left's doomsday demographic projections that are without factual basis and are indeed antithetical to reality. As long as the demographic lie goes unchallenged by Netanyahu, the Left will continue to argue that by refusing to build a terror state on the outskirts of Tel Aviv, Netanyahu is endangering Israel.

Netanyahu deserves a lot of credit for standing up to Obama on Friday. He showed enormous courage in doing so. It was his finest hour to date and polls over the weekend show that the public appreciates and supports him for it. He must build on that success by putting the focus on the truth.

PM: Israel is the one anchor of stability in the Mideast - Jerusalem Post