Listen to the Palestinians

Osama Bin Laden is dead. But there is still no peace in the Middle East. Thus the pressure being placed on Israel to take ever greater risks for peace will continue to mount.

In Washington, there is an emerging consensus that we must force Israel to make significant concessions to the Palestinians in the hope of luring them back to the negotiating table. And in capitals around the world, there’s mounting agreement that the time has come for the United Nations General Assembly to recommend the creation of a Palestinian state.

It is at times like these – when the world most urgently demands progress – that it’s least likely to hear Israel’s arguments or heed her concerns. But it’s also at times like these that Israel sometimes benefits from the powerful testimony of a most surprising witness: the Palestinians themselves. At critical junctures during Israel’s long struggle for peace, the Palestinians have often taken actions which highlight why Israel must be cautious about her partner for peace. It becomes harder to downplay Israel’s concerns when the Palestinians so clearly validate them. 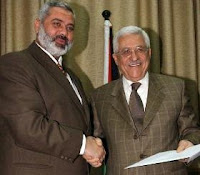 Of course many observers would rather overlook Hamas’ bloody record of rejectionism and imagine them as a potential partner for peace. Thus it was with perfect timing that Hamas leader Ismail Haniya commented on the killing of Osama Bin Laden. While the entire civilized world expressed relief that this arch-terrorist now sleeps with the fishes, Haniya stated that “We regard this as a continuation of the American policy based on oppression and the shedding of Muslim and Arab blood,” In addition – and even more troubling — Haniya referred to Bin Laden as “an Arab holy warrior.” He added that, “We ask God to offer him mercy with the true believers and the martyrs.” Eloquent testimony, indeed.

Hamas has a stockpile of mostly short-range missiles which it doesn’t hesitate to fire into every Israeli population center they can reach. Today, Hamas controls only the Gaza Strip, and these missiles threaten only Israel’s southern cities. If and when Hamas had sufficient power in the West Bank, these same missiles would be able to reach almost all of Israel, including every part of Jerusalem and Tel Aviv. The major risk that Israel would take in any transfer of West Bank land to Palestinian control is that Hamas would snatch it away from the Palestinian Authority as quickly as it took Gaza. The developments of the past week highlight how very real this danger is.

Israelis overwhelmingly want peace, even if it means making painful concessions to the Palestinians. And they have a solid track record of taking serious risks for peace. But the Israelis have learned the hard way that they cannot want peace so badly that they ignore harsh realities. Thus we must listen to the Israelis when they express their concerns. And it is equally important that we listen to the Palestinians when they validate these concerns. Quite often both sides are giving us warnings that we should heed.

Advisor to Abbas: Hamas Has No Need to Recognize Israel - Arutz Sheva