The first president I ever voted for was Jimmy Carter. Since I was eleven years old in 1976, my vote was not in the general election. I cast my ballot in elementary school for the Weekly Reader Student Presidential Election Poll.

I selected Carter for very superficial reasons. I was fascinated that he was a peanut farmer. At the time, Jimmy seemed more motivated than Ford to be president. The press loved him, and the fact he was a Christian sealed my vote.

Of course, disaster soon followed. The Carter years are regarded as the low point for presidential leadership. The online Encyclopedia Britannica states:

The top failure of the Carter administration was the Iran hostage crisis. It marked a milestone when third-world nations realized that Uncle Sam could be pushed around. Carter's disastrous attempt to rescue the hostages via his botched plan, Operation Eagle Claw, only underscores his failure as commander-in-chief.

I would be remiss not to mention that Carter was the only sitting president to be attacked by a rabbit.

I learned a valuable lesson from my experience with Jimmy Carter. In the coming of age of my political thinking, I realized there is no place for idealism in this cruel world. Unless you have a plan and determination in dealing with problems, you will only help to compound them. 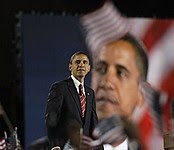 In 2008, Americans went to the polls and elected Barack Obama for many of the same reasons Jimmy Carter was elected. The Republicans were in charge during a time of great economic turmoil, so votes collectively decided to give the Democratic leadership a swing at bat.

Obama may soon be about to put the Jimmy Carter years to shame. The reason for the eclipse may not be result of decisions Obama is making, but rather may reflect the one huge blunder we made. Let’s not forget that people elected someone whose primary skill was in being a community organizer. A quote out of the Czech Republic kind of sums it all up:

The danger to America is not Barack Obama but a citizenry capable of entrusting a man like him with the presidency. It will be far easier to limit and undo the follies of an Obama presidency than to restore the necessary common sense and good judgment to a depraved electorate willing to have such a man for their president. The problem is much deeper and far more serious than Mr. Obama, who is a mere symptom of what ails America. Blaming the prince of the fools should not blind anyone to the vast confederacy of fools that made him their prince. The Republic can survive a Barack Obama, who is, after all, merely a fool. It is less likely to survive a multitude of fools such as those who made him their president.

Since the world is already on a path toward financial calamity, there really isn’t a need for Obama to do anything to aid the process. As long as he remains the "Spectator in Chief," we will continue to advance towards an abyss.

There is a global crisis in leadership nearly everywhere you look. I’ve never seen a time when so many western nations have had governments in a state of gridlock. Indecision is so pervasive that nobody wants to be in charge of the new campaign in Libya. They can’t even agree on what to call it. In a briefing aboard Air Force One, the deputy national security adviser, Ben Rhodes, said U.S. forces were involved in a “kinetic military action.”

This would be a perfect time for the Antichrist to come on the scene. The Beast will be the most evil leader ever to come to power, but at first he will appear to be the world's savior. The Antichrist will solve one problem after another. Since we have so many problems, I can see why the Bible predicts the global population will worship him.