Is Obama About to Push Palestinian State in September? This Would Be a Terrible Mistake

As international support builds for the Palestinians to unilaterally declare their own state at the U.N. General Assembly opening session in September, I am growing increasingly concerned that President Obama is preparing to endorse such a move and even push for it.

America can ill afford turning on Israel at all, much less now. To do so would be a terrible mistake.

Bible prophecy makes it clear that in the last days the nations of the world will divide up the land of Israel. But the Scriptures are also crystal clear that the nations will face the judgment of Almighty God for doing so.

“For behold, in those days and at that time, when I restore the fortunes of Judah and Jerusalem, I will gather all the nations and bring them to the Valley of Jehoshaphat ["the Lord judges"]. Then I will enter into judgment with them there on behalf of My people and My inheritance, Israel, whom they have scattered among the nations; and they have divided up My land.” (Book of Joel 3:1-2).

Let the nations be warned by the God of Israel: they are on a dangerous and disastrous road. Let us pray they turn around before it is too late.

One could wish the clear warning of the Bible would be enough to dissuade the President from dividing the land of Israel. I am not sure it will. Perhaps sheer politics will help. A new poll shows that 51% of Americans oppose a unilateral declaration, and only 31% supporting one. Nevertheless, the President and his senior advisors don’t seem to be listening to the Lord, or the people on this one. 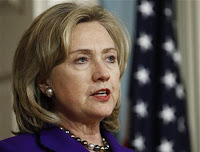 “The United States plans a new push to promote comprehensive Arab-Israeli peace, Secretary of State Hillary Clinton said on Tuesday, suggesting a stronger U.S. hand in trying to solve the Israeli-Palestinian conflict,” reports Reuters. “President Barack Obama will lay out U.S. policy toward the Middle East and North Africa in the coming weeks, Clinton told Arab and U.S. policy makers in a speech that placed particular emphasis on Israeli-Palestinian peace.”

“The president will be speaking in greater detail about America’s policy in the Middle East and North Africa in the coming weeks,” Clinton said at the U.S.-Islamic World Forum, a gathering sponsored by Qatar and the Brookings Institution, a Washington think tank, Reuters reported. “America’s core interests and values have not changed, including our commitment to promote human rights, resolve long-standing conflicts, counter Iran’s threats and defeat al Qaeda and its extremist allies…. This includes renewed pursuit of comprehensive Arab-Israeli peace.”

UN: Palestinians Ready for Their Own State - CBN

PA: US must present peace plan before we declare state - Jerusalem Post