EU Should Forge Ahead with Electronic ID, Says Estonian Minister

Estonians reckon that if the Internet had a hometown, it would be located somewhere within the borders of their electronically advanced Baltic state.

Estonia made the headlines in 2000, an e-lifetime ago, when it introduced a ‘paperless government’. Since then, the 1.3 million strong nation has remained a pioneer among EU member states when it comes to the e-society.

Estonian parents check the academic progress of their children online. Estonia’s e-police are just a click a way from knowing whether the car you are driving has valid insurance or is due for a road safety test. Doctors write electronic prescriptions. And would-be entrepreneurs can electronically register a new business in under 20 minutes.

Meanwhile Estonians no longer “go” to the bank at all; they “log on” to it. Only tourists buy paper tickets for the public transport system (everyone else does it via the internet and the use of their obligatory electronic ID card or their mobile phone). And all can vote electronically.

Economy Minister Johan Parts, previously Estonia’s prime minister, brushes off concerns that further advances with the internet and e-society could lead to jobless recovery – unemployment in Estonia’s running at over 17 percent – as technological progresses while not bringing a wealth of jobs with it.

“E-society and all these services make government effective, make government transparent and they bring citizens closer and we can’t say that these initiatives should stop because they are more efficient and we are maybe losing jobs – that cannot be an argument.”

“It is much easier to be successful in the global arena when you are working on IT or all the things relating to e-issues than physical exports,” he said, noting that re-training graduates to give them the specialist IT skills required for a well-functioning e-society is one of the biggest problems. 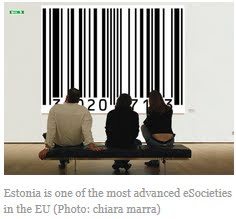 The other area of concern is cybersecurity. In 2007, Estonia had the dubious honor of becoming the first country in the world to be subject to a cyber attack, widely suspected to have been orchestrated by Russia. Since then, the University of Tartu and Tallinn University of Technology offer a master’s degree in cyber-defense. This year, a special government agency will be established to deal with cyber-security.
To get to this point, the legal infrastructure (allowing for e-signatures, e-commerce and privacy) has to be set up as well as an environment where e-identification that can be used across all member states.

“We have to make possible that e-ID is accepted in all countries in the same way. This means if you have Estonian e-identification you can do everything in Germany, in Portugal, in Italy, in Finland.

“That is not the case for now. It needs a very real action plan.”

While there is opposition against the electronic Personal Identification Card (ID), the success will overrule it eventually.

Although ID cards are fully accepted by the majority of Europeans, electronic ID cards seem to be only in the testing arena at this time. Doubtless, the older generation will oppose such cards while the younger ones will easily accept this modern convenience of personal identification.

Is there an alternative way? The answer is no. Whether we call it an electronic ID, a printed paper ID, or as is required in the United States, a driver’s license ID, the various systems all will meet in the end. A modern society cannot function in a civilized manner without a workable identification system. Without proper ID, there is no bank loan, utility service, access to the educational system, healthcare and innumerable other social conveniences—all cannot be utilized without an ID. In the end, as all Bible believers know, this will lead to the final virtually perfect identity system, which is called the mark of the beast.

Is the World Headed Toward a Single Global Currency? - E-Commerce Times

Mark of the Beast communication system may now be under development - ThePropheticYears.com (Don Koenig)