Bahrain, a Persian Gulf island nation, has been swept up in the pro-democracy protests parading across the Mideast. But Bahrain’s protests are different because of Iran’s influence.

A democratic outcome from the current crisis could land Bahrain under the thumb of Shia Islamists aligned with Iran. Tehran would use that influence to close America’s military facilities in Bahrain, expand its reach by instigating rebellion among Saudi Shia, and leverage the global oil market.

This would put Tehran in the catbird seat as the region’s uncontested hegemon.

Bahrain’s pro-democracy crisis started with crowds of Shiite Muslims seeking reforms in a country ruled by a Sunni royal family. The protesters demanded the monarchy give up control over top government posts to allow Shia political representation proportional to their numbers. Bahrain is 70% Shia.

Bahrain’s military responded with brutal force. Last Thursday, Bahraini soldiers used teargas, rubber bullets, and buckshot to clear Shiite protesters from Pearl Square in Manama, the capital city. Shiite protesters retook Pearl Square on Feb. 19 after the military withdrew, but the opposition has yet to accept the monarchy’s plea for dialogue.

This crisis dates back to last summer, when government agents arrested scores of Shiite activists before parliamentary elections. But even with the harassment, the main Shiite faction, an Islamist group called Al Wefaq (Accord), won 18 of the 40 seats in the lower house. Those members walked out of parliament after the government attacked the protesters last week.

Iran’s role in the current crisis is unconfirmed. However, Tehran’s history is intertwined with Bahrain’s, and it has a motive. The nations maintain cultural, religious, and economic ties, and Persian (Farsi) is widely spoken in Bahrain.

For more than a century, Iran and Bahrain disputed over Bahrain’s sovereignty, until a 1970 survey determined that Bahrainis overwhelmingly desired independence. That decision was embraced by Iran’s Shah and ratified by Iran’s parliament, but suspicions still linger.

Two years ago the former Iranian parliament speaker Ali Akbar Nateq-Nouri described as “inspector general” in the office of Iran’s supreme leader Ali Khamenei (the Ayatollah), complained that under the Shah, “Bahrain was our 14th province and had a representative at the parliament,” according to the international Arabic daily Al-Quds Al-Arabi.

Houda Nonoo, Bahrain’s U.S. ambassador, said, “Iran has had claims in the past on Bahrain.” She said the 2009 claim was “very similar to [Saddam Hussein’s] Iraq mentioning Kuwait as their 19th province,” according to the Washington Times. 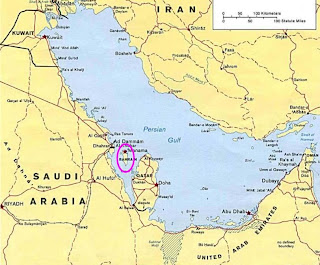 Whether Iran seeks to reclaim Bahrain and/or is stoking unrest via proxies is unconfirmed. But it is clear Tehran has exercised similar influence in Lebanon and Iraq. And it is also clear Iran would benefit if the current crisis results in a Shia-controlled Bahrain.

First, Iran would use a Bahrain platform to destabilize neighbor Saudi Arabia by instigating unrest among its Shia population. That could disrupt the flow of oil and/or radically alter the kingdom’s government and the region’s balance of power.

Riyadh sees Iran’s hand in Shiite empowerment in Baghdad and Beirut, and anticipates the same potential among its Shiite minority in the kingdom’s oil-rich eastern province. It fears the Saudi Shia, which make up 30% of the kingdom’s population, could rise up to demand reform — or at least share power — much as the Shia in Bahrain.

Last month, Saudi King Abdullah rebuked President Obama for insisting the Egypt crisis was not a homegrown uprising, but the result of Iranian interference. That is why the king will do everything possible to help Bahrain resist the Shia uprising, and should it come to Riyadh, the king won’t hesitate to use force. Stratfor’s sources indicate Saudi special operations forces are already in Bahrain helping put down the unrest.

Second, Iran would boot American forces out of Bahrain and replace them with its Revolutionary Guard forces. Tehran uses the Revolutionary Guard in Lebanon to train terrorist proxy Hezbollah and in Iraq to empower Shia power broker cleric Muqtada al-Sadr’s insurgent Mahdi Army.

The 60-year-old U.S.-Bahrain relationship, which is built around defense issues, would end if an Iran-favoring government takes power. For now, Bahrain relies on U.S. security guarantees, and in exchange American forces enjoy access to air and naval facilities for the Fifth Fleet, which controls two carrier battle groups, monitors strategic passages such as the Strait of Hormuz, and tracks Iran’s navies—the Iranian fleet and the Revolutionary Guard’s navy.

Finally, Iran would threaten the flow of Persian Gulf oil if it had its way in Bahrain. Manama is not a major oil producer, but it does share with Saudi Arabia the 300,000 barrels per day exported from the offshore Abu Safa field.

But the real threat is Iran’s aim to leverage all Persian Gulf oil production. Iran already owns the world’s third-largest oil reserves, followed by fourth-place Iraq. Baghdad’s Shia-controlled government is in lockstep with Tehran and will soon be free of American forces, and therefore more vulnerable to Tehran’s influence.

Saudi Arabia has the world’s largest oil reserves, which Iran would like to control as well. A pro-Iran Bahrain would provide Tehran a platform from which to seed Saudi Shia insurrection much as it did in Iraq. No telling what might happen if Saudi Shiites sitting atop the kingdom’s oil fields cooperate with Iranian agents.

Bahrain would also provide Iran access to transit channels for oil tankers leaving Saudi Arabia’s loading facilities. Iran’s Revolutionary Guard navy could use that access to create coastal minefields — a capability it possesses — to control shipments, or soldiers could sabotage ships, as in a terrorist group's attack on a Japanese oil tanker last summer. Both ways, the effect is to slow exports, making crude oil prices skyrocket, which helps Iran’s economy and its hegemonic leverage.

Couple that capability with an Iranian west coast home port for attack vessels, and Tehran clinches a stranglehold on oil production and transit. Quickly the 29-mile-wide strategic Strait of Hormuz becomes a very dangerous place, through which half of the world’s seaborne oil shipments pass.

The Bahrain crisis is different from the unrest elsewhere, because Iran is likely at its center. For now, America’s best course of action is to be silent, unlike our interference in the Egyptian crisis. Let the affected nations — Bahrain and Saudi Arabia — resolve the situation without our meddling.

Widespread arrest of protesters all across Iran - Payvand