When Technology Turns Against Us

We all know we are heading into a full-blown surveillance society. The U.K. probably heads the world in this effort, but the U.S. is nipping at its heels. The Obama administration is assuring that.

Newsmax online is reporting the fact that Obama is eyeing the Internet to ID all Americans. This was preceded by the Net Neutrality Act which was the first phase of the government monitoring the Internet. White House Cybersecurity Coordinator Howard Schmidt says,

"This is the perfect spot in the U.S. government to centralize efforts toward creating an 'identity ecosystem' for the Internet."

Privacy groups are alerting that this is an absolute infringement on Americans' rights. The Department of Homeland Security will also help implement this.

Keep in mind the power of the Internet and computer technology. The Stuxnet computer worm was reportedly more effective in setting back Iran's nuclear plans a couple years than anything else, including an air strike. Stuxnet's complexity has stunned the computer security industry. It was certainly affiliated with a government - likely Israel, possibly with U.S. help. The worm had Iran's name on it and specifically their nuclear computers. Why have we not heard more about this? It may be the technological story of 2010. But is Stuxnet an argument for a supra-national government body to regulate cyberspace? 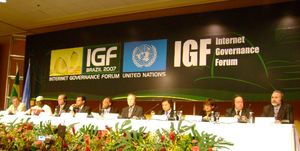 The Obama administration has back-up support from a U.N. office in Geneva where officials from 18 countries voted to staff a working group on the future of something called Internet Governance Forum. Since it's the U.N., there is already reason to be concerned. The plan was supported by China and, not without surprise, Iran. So, it has global impact, not just Obama impact.

For good or bad, technology is taking center stage. It has for 25 years or more. Time magazine's man of the year is Mark Zuckerberg, creator of Facebook. This communication tool has taken the world by storm. Zuckerberg is worth about $50 billion as a result of a device that helps people communicate with one another. People are eager to make friends even if some of them could be suspect. It helps them feel connected and not isolated, something essential in our 21st century impersonal world.

The equally-popular Twitter could also be abused. The Iranian youth revolution of a couple years ago was coordinated heavily by the young people tweeting one another. If untrained youth can run a revolution - admittedly unsuccessful due to Iran's president and her mullahs - how could Antichrist use it against the world?

Whether it's net neutrality, an effort to use the Internet to ID all Americans, Facebook, Twitter, or an all-new scheme to come down the pike to use the magic of modern-day technology to limit freedoms, stay on guard. We may not be able to stem the tide of intrusiveness and even an ID effort. The Bible talks too much about such themes as privacy loss under the rule of Antichrist, but please don't fall under the spell of "it's predicted, we can't fight it, let's surrender." As Edmund Burke said,

"All that is necessary for evil to prosper is for good people to do nothing."

But the end-time technological infrastructure is being put in place as I write this. It could take weeks or it could take years for complete implementation. This is a reminder to stay tuned and to spot the efforts as they are introduced by snoopy governments and the U.N. Please speak up when you can and let it be known that some freedom-loving people will protest until the end, even if, in the end, evil triumphs. Remember to read the last chapter. Evil triumphs only temporarily. The King of kings will return to right all these wrongs and abominations!

Utah will be site of huge cyber protection facility - CNN

Protecting Your Privacy Both Online and Offline – An Interview with Trace Mayer, JD - FTMDaily (Jerry Robinson)