Aflockalypse Now ... or Not

End-of-the-world fever seems to have hit the masses. It's as epidemic as whatever killed thousands of drum fish in the Arkansas River. First it was 2012 and the end of the Mayan calendar. Now animals are dying by the hundreds and thousands in a wide variety of places around the globe. Plus, a group of date setters are looking for the rapture to occur in just five months on May 21. Whether it's due to boredom, or fear, or a desire to rouse folks from their spiritual slumber, humans are fascinated with the apocalyptic. Yet, so far, efforts to set a date for the Rapture or Judgment Day have been incorrect and … plain anticlimactic.

First, the drum fish died. An estimated 100,000 of these bottom feeders began floating to the surface of the Arkansas River on December 30. When thousands of redwing blackbirds fell out of the sky over Beebe, Arkansas, landing in the road and dropping onto people's cars, people started to wonder, what else is wrong with Arkansas? 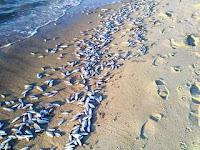 But, it didn't stop there, of course. About 500 redwing blackbirds and starlings were discovered dead along a stretch of highway between New Roads and Morganza, Louisiana on Monday, January 3. In Italy, thousands of turtle doves rained from the sky onto the streets of Faenza, about 30 miles southeast of Bologna. The shores of the Chesapeake Bay in Maryland were littered with the carcasses of two million fish. Coromandel beaches on the North Island of New Zealand were suddenly covered with dead snappers on January 4. Boaters reported seeing "a carpet of floating fish further out to sea all along the coast." All within a few days of each other.

The series of strange animal deaths has created a flurry of interest in the end times, and there are plenty of people wondering if the end of the world is at hand.

The spate of animal deaths is a bit unnerving until each case gets investigated.

The USGS notes that mass animal deaths are not that uncommon. The deaths of the fish and birds in Arkansas simply brought attention to the fact that animals do die in large numbers fairly frequently. For instance, the USGS NWHC documented eight separate events in 2010 in America alone in which 1,000 or more birds died en masse. It's sad, but not that unusual – certainly not indicative of the apocalypse ... or as it has been widely called in the press ... the "aflockalypse." Remember, the vast majority of towns are happily carcass-free.

Adding to the excitement, a small group of believers are calling for the Rapture to take place on May 21 of this year. They've based their expectations on Bible code calculations made by 89-year-old Harold Camping. Harold Camping was incorrect the last time he attempted to predict the Rapture when he said it would occur in 1994. Camping is not alone in trying to make such predictions. Sir Isaac Newton declared the apocalypse had to wait until at least AD 2060.

Others throughout history have made their estimations, and have been wrong: Jesus said even he did not know the time of the end, saying in Mark 13:32-33,

"But of that day and that hour knoweth no man, no, not the angels which are in heaven, neither the Son, but the Father. Take ye heed, watch and pray: for ye know not when the time is."

Certainly, then, we need to watch and pray. Setting dates, or being fearful because of bird deaths, or making too much of the end of the Mayan cyclical calendar, all these things are unhelpful. The best thing we can do is to just keep doing the work He's set us to do until He comes.

Thousands of fish washed up in Chicago - Metro

Fish & Bird kills: are we getting answers or being placated? - Northeast Intelligence Network (Douglas J. Hagmann)

Mass animal deaths cause many to search for answers - NewsNet5.com