The United Nations has rejected an attempt by Lebanon to stop Israel from drilling for oil and natural gas in the Mediterranean.

U.N. Spokesman Martin Nesirky said Wednesday that the mandate of the U.N. Interim Force in Lebanon (UNIFIL) “does not include delineating maritime lines. We are talking about two different things: coastal waters and a disputed boundary.” Nesirky added that the U.N. position was “what UNIFIL said.”

Lebanon submitted its request to U.N. Secretary-General Ban Ki-moon in the wake of last week’s news that confirmed preliminary estimates of gas reserves in the massive energy field discovered beneath the Jewish State’s northern coastal waters.

Lebanese Foreign Minister Ali Shami sent a letter Tuesday, asking Ban to “do everything possible to ensure Israel does not exploit Lebanon’s hydrocarbon resources, which fall within Lebanon’s economic zone and delineated in the maps the foreign ministry submitted to the United Nations in 2010,” Shami wrote.

Shami added that Israel’s exploration for energy in the Mediterranean “is a flagrant violation of international law and an attack on Lebanese sovereignty.” Lebanon and Hizbullah claim that the fields extend into waters off the Lebanese coast.

The discovery far surpasses an earlier find, the Tamar gas field, also located off Haifa’s northern port, and positions the Jewish State to become an exporter of the natural resource. 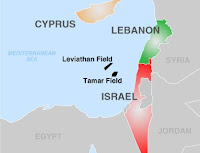 Confirmation of the estimated reserves in the Leviathan gas field and several other newly-discovered gas and oil fields in the Mediterranean in recent years has raised new tensions between the two nations as Lebanon accuses Israel of encroaching upon its territory.

Israel for its part has asserted that the discoveries of this and several previous gas fields were made well within its borders and has warned it will do what it must to protect its natural resources.

Since no formally-marked maritime borders exist between the two nations, Lebanese Energy Minister Gebran Bassil told the AFP news agency Tuesday that Beirut plans to map what it considers to be its sea borders. The country will then auction off the rights to explore its potential natural gas and oil reserves sometime in 2012, he said.

There was no mention of any negotiation process with Israel over the maritime borders.

The Lebanese government plans to submit its claim under the U.N. Convention on the Law of the Sea (UNCLOS), according to energy expert Roudi Baroudi.

He told The Daily Star that Lebanon must turn to the U.N. to delineate any offshore exclusive economic zone, adding that Lebanon has been party to UNCLOS since 1995. Israel is not a member.

“Diplomacy offers the most logical solutions for any potential problems in this area, and we should exhaust this option before considering any other options,” he said, adding that the Leviathan field “could well straddle our maritime borders with Israel – and possibly Cyprus too.

“Disputes over oil and gas fields are not new; they exist all around the globe, and there will be more disputes to come… we should use every diplomatic tool at our disposal, assisted by our major allies in the Arab world, in Europe, and even the United States to define our maritime boundary and to force the Israelis to respect UNCLOS even if they aren’t members of it.”

Citi: Leviathan worth $4.8b per year to Israel - Globes

Natural Gas: Changing the Geopolitics of Eastern Mediterranean and Beyond - Energy Tribune