It is an oppressive, oil-rich, terrorist-supporting, atomic-seeking, missile-acquiring, arms-proliferating and American-hating regime. Hint: Iran is one of this Latin American country's few allies.

Venezuela, the culprit regime, is 5 times closer to American shores than the Persian menace and potentially far more dangerous. Yet President Barack Obama has no visible Venezuela policy to counter the growing threat. 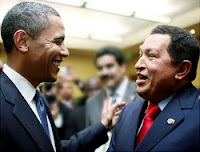 Last year when Obama met Venezuela's leftist leader Hugo Chavez, he smiled, shook the man’s hand then later explained that showing "courtesy" wasn't "a sign of weakness." But the South American pariah is modeling itself after radical regimes Iran and Cuba while Obama just smiles.

Consider the mounting threat posed by Venezuela, a nation only a couple days' drive down the Pan American highway from Texas.

Chavez is radicalizing Venezuela with the help of Cuban intelligence agents, who are embedded throughout his government. Like Fidel Castro, his mentor, Chavez incorporated Cuban-style militias in the armed forces and criminalized protests to silence opposition.

This summer Chavez arrested anti-communist activist Alejandro Pena Esclusa, a former Venezuelan presidential candidate who opposes Chavez's Marxist agenda. Esclusa predicted Chavez would face so much popular discontent in this fall’s elections that he would revert to foreign powers like Iran for protection.

Last year Esclusa also wrote "Chavez is providing the Venezuelan territory to Middle Eastern terrorist groups, not only to help him defend his revolution inside the country, but as a powerful deterrent against his international adversaries [read U.S.]."

As Esclusa predicted Chavez lost his super-majority this fall and then conducted a massive power grab. This month he pushed through the lame duck session of Venezuela’s National Assembly measures that granted him temporary power to decree laws, restrict Internet content and broadcast-media freedoms, to punish legislators who switch parties and allow him to nationalize private firms.

Incoming legislators labeled Chavez's moves a "coup d'etat," and one media outlet claims Chavez intends "to implant a communist system in Venezuela through a totalitarian and militarized state."

Chavez has indeed turned to Iran for protection as Esclusa predicted. Last month the German magazine Die Welt revealed Iranian plans to establish a ballistic missile base in Venezuela, likely in response to American plans to station an anti-ballistic missile system in Europe that targets Tehran's growing threat. The Iranian plans, which also support Chavez's aim to deter the United States, were allegedly made during the Venezuelan's October trip to Tehran.

Further, Die Welt reported Tehran plans to base long-range Shabab 3 missiles in Venezuela that are capable of reaching the United States. The basing agreement gives Chavez permission to use the missiles in case of an "emergency" for "national needs." The Shabab 3 can carry three types of warheads: conventional, biological and chemical.

This fall we also learned Chavez has nuclear ambitions that might include an atomic bomb. Not surprisingly, Chavez has staunchly defended ally Iran’s nuclear program, which he insists is not making atomic weapons despite U.S. suspicions.

Chavez admitted to the press "We’re taking on the project of nuclear energy for peaceful purposes” but no one should be surprised when Iranian President Mahmoud Ahmadinejad sells Chavez, whom Ahmadinejad calls "brother," a uranium enrichment starter kit for a Latin bomb.

Chavez has long expressed an interest in developing a nuclear energy program, but U.S. officials, according to cables released by WikiLeaks, scoffed at Chavez’s nuclear ambitions due to the lack of domestic expertise. However, the issue resurfaced this fall because of the case of a New Mexico physicist accused by U.S. authorities of offering to help Venezuela develop a nuclear weapon.

Russian President Dmitri Medvedev turned the tables on Venezuela's nuclear naysayers when he agreed this October to build a reactor for his Latin American partner. "We want our partner Venezuela to have a full range of energy possibilities," Medvedev said. Not coincidentally, Venezuela and Iran are reportedly developing a reliable source of uranium in that country, and no telling what other joint projects the rogues are cooking up.

Venezuela also supports regional and international terrorist groups like its ally Iran, which sponsors the Lebanese-based Hezbollah, known for the 1984 bombing of the U.S. Marine barracks in Beirut. A 2010 Pentagon report on Iran confirms Tehran provides Hezbollah with weapons and equipment to strike and threaten U.S. interests worldwide. And Reuters news service reported in 2009 that Israeli officials confirmed the Venezuela regime hosts Hezbollah’s major outpost in South America.

Chavez, for example, just promoted loyalist Gen. Henry Rangel Silva to the top military position in the Defense Ministry. In 2008, the U.S. Treasury Department listed Silva as a drug "kingpin" involved in financing the Revolutionary Armed Forces of Colombia aka FARC, a terrorist organization with drug trafficking ties.

Unfortunately, the missile proliferation problem will likely get worse. The Russians reported to the U.N. Register of Conventional Arms earlier this year Venezuela's purchase of 1,800 SA-24 missiles. The United States failed to stop that delivery, according to leaked cables, amid concerns Caracas might pass missiles to the FARC or Mexican drug gangs. The SA-24 is effective up to 19,000 feet.

Finally, Venezuela is arming itself for an unknown threat. In 2010, Russia gave Venezuela a $4 billion credit to buy more weapons such as tanks, fighter jets and air defense systems. This weapons credit deal comes two years after Russia delivered 472 missiles with launchers, 44 attack helicopters and 24 combat aircraft, according to U.N. records.

Caracas' new arms buying spree threatens hemispheric security because Venezuela will continue its proliferation practices. The 2010 Russian sale of a Kalashnikov rifle factory to Venezuela is problematic given Chavez’s Marxist revolutionary ambitions and ties to leftist Latin groups. Potentially worse is Venezuela’s interest and Russia’s willingness to sell Chavez sophisticated S-300 anti-aircraft missiles batteries, which could be used at home or transferred to Iran in violation of U.N. sanctions to protect Tehran’s nuclear sites from possible Israeli or American air strikes.

Chavez transformed Venezuela into a totalitarian and militarized state that threatens hemispheric security. Despite the inevitable cries of "Yankee Imperialism," President Obama urgently needs a substantive policy that includes possible military action to get rid of this threat to the Americas.

Hugo Chavez is Feeling the Squeeze - The Diplomatic Courier