Denying the Jihad Against Christians

An Islamic jihad-martyrdom suicide bomber murdered twenty-two people and wounded eighty more at the Coptic Christian Church of the Saints in Alexandria, Egypt on New Year’s Eve. Predictably enough, this mass murder has not resulted in any worldwide revulsion against Islamic jihadists, or general recognition of how Islamic supremacists and jihadists are persecuting Christians not only in Egypt, but in Iraq, Pakistan, Indonesia, Nigeria, and elsewhere also. Instead, it has brought only new and imaginative twists on the usual evasion, obfuscation, denial and finger-pointing that generally follow jihad attacks.

Egyptian President Hosni Mubarak was one of the first to muddy the waters, claiming that “foreign hands… a terrorist operation that is alien to us,” rather than homegrown jihadists, carried out the attack. “All of Egypt is targeted,” Mubarak went on, digging deeper. “This blind terrorism does not differentiate between Copts and Muslims.”

Yet no mosque was targeted, and no Muslim was killed. It was a remarkable coincidence that this “blind terrorism” that did not “differentiate between Copts and Muslims” struck at a Coptic church, killing only Christians and no Muslims at all. 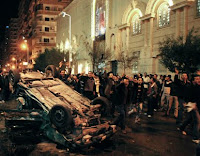 But the facts didn’t stop Barack Obama, either. Obama’s statement was better than Mubarak’s in that he acknowledged that “the perpetrators of this attack were clearly targeting Christian worshipers.” However, he also claimed that the attack killed and injured people “from both the Christian and Muslim communities.” No Muslims were actually killed or injured in the attack. And if the perpetrators (unnamed by Obama) were indeed “clearly targeting Christian worshipers,” what was Obama’s point in going out of his way to say that Muslims were hurt also? Did that claim make the crime more heinous in his eyes? Or did he think that it would mitigate the harsh reality of the fact that believing Muslims, acting in the name of Islam, were the anonymous perpetrators that he dared not name?

“This terrorist act bears the fingerprints of Zionists who keep on targeting religious sights [sic] and are working to … sow discord between Muslims and Christians.”

Iran’s PressTV, in an unsigned editorial, struck a tone so similar as to give the impression that a set of talking points were being circulated:

“The fresh plot by terrorists to target churches is an organized Zionist scenario aimed at creating a rift between Muslims and Christians.”

This preposterous claim has been circulating for awhile. A Saudi Sheikh, Salman al-Awda, a member of Sheikh Yusuf al-Qaradawi’s International Union for Muslim Scholars, made the same assertion about other recent jihad attacks against Christians in the Middle East:

“These are tools in the hands of the Zionists, Israelis, Europeans, and Orientals, with the goal of damaging Islam.”

Even one Middle Eastern Christian leader climbed on this bandwagon: the Melkite Greek Catholic Patriarch Gregory III Laham declared several weeks ago that Muslim persecution of Christians in the Middle East “is actually a conspiracy planned by Zionism and some Christians with Zionist orientations and it aims at undermining and giving a bad image of Islam.”

Mamdouh Nakhla of Egypt’s Al-Kalema Human Rights Center skewered both Mubarak’s claim that “foreign hands” had carried out the attack and the anti-Semitic conspiracy paranoia that pointed the finger at Israel. “The crime is local,” declared Nakhla, “and those who committed it are known … The Al Mujahedeen website threatens to repeat the attack in more churches. The site has addresses of churches and even how to make a bomb. Does security not know about it? Anyone who says that it was a foreign or Israeli plot is trying to play down the crime and is trying to clear those murderers of this massacre, and I consider them their accomplices.”

Accomplices were found elsewhere as well. Eyewitnesses stated that security forces had left the area around the church about an hour before the explosion, but when enraged Copts started throwing stones at a nearby mosque, security forces immediately reappeared and starting firing tear gas at the Copts. Says Michael Meunier, president of the U.S. Copts Association:

“Mubarak’s regime has not only ignored, but in many cases contributed to the alarming increase in anti-Coptic violence.”

Pope Benedict XVI, meanwhile, called for “concrete and constant engagement of leaders of nations” to ensure the safety of Middle Eastern Christians. In response, Ahmed al Tayeb, the Imam of Cairo’s Al-Azhar, the most prestigious institution in Sunni Islam, denounced the Pope’s “interference” in the internal affairs of Egypt. Apparently Egyptian authorities can deal with their Zionist crypto-jihadists on their own, without meddling from the Vatican.

The denial and obfuscation is coming from other quarters as well. Human rights groups and many Christians in the West have been strangely silent about Muslim persecution of Christians. Many American Christians are surprised just to discover that there are ancient communities of Christians in Islamic lands at all. Extending a helping hand to them necessarily involves difficult issues of American relationships with Islamic countries, which is enough to make the task too daunting for most.

And so Islamic jihadists and Sharia supremacists continue, with ever increasing confidence and brutality, to prey on the Christians in their midst, while those who should be working to protect them make excuses and look the other way. And so in the absence of any realistic appraisal of these jihad attacks, nothing is more certain than that such attacks will continue to occur, both in Egypt and elsewhere in the Islamic world.

Police on alert after threats on Copts - Sydney Morning Herald

Bombings in Iraq Target Homes of Christians - The New American

Mark Seddon: We may be witnessing a new age of Christian persecution - The Independent