Death from a Thousand Cuts

The British government is denying that it has information about the capture of three Israeli troops by Syrian forces during the Lebanon War of 1982. The British won’t release documents regarding the incident, in which Zachary Baumel, Yehuda Katz, and Zvi Feldman disappeared during the Battle of Sultan Yacoub.

It is infuriating that our European cousins won’t release files because such a release “could harm diplomatic relations with Syria,” according to a report from the Jewish Chronicle.

Wow. The inversion of truth in our world today continues, as democracies attempt to placate murderous regimes. Let us also remember the name of Ron Arad, the Israeli pilot shot down during that same Lebanon war; his fate remains unknown. Of course, IDF soldier Gilad Shalit has been held more than four years now by Hamas.

That the British would seek to have diplomatic relations with the war criminal Bashar Assad shows how morally bankrupt Europe is. Syria is a police state, and a key ally of Iran’s state-sponsored terrorism. Assad has continued “governing” by terror, perfected by his father, Hafez, whom a news magazine once described as a “hard-eyed Phoenix,” while lambasting Ariel Sharon.

The Europeans, in a bid to placate radical Muslims, make the mistake of assuming that they won’t be a target of terrorism. Guess what? They already have been the target, and will continue to be targets. By the way, ask the victims of the Nazis how successful the strategy of placating is. Message: eventually, they come for you, too.

Diplomatically, militarily, culturally, and of course politically, the Israelis are being dealt a death by a thousand cuts: daily, even hourly attempts to undermine them.

(At this point, it is important to raise the issue of biblical worldview. Those of us who believe the Bible is the Word of God recognize that Israel will not disappear, but her enemies are on the cusp of apocalyptic judgment…and are not aware of it!)

Benjamin Netanyahu, very familiar with the U.S. and Western attitudes, issued a statement two weeks ago condemning the hypocrisy of the so-called “human rights” groups, who spend much of their time criticizing Israel. 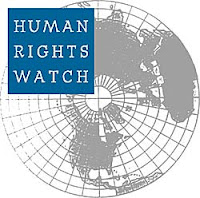 Human Rights Watch, morally bankrupt, issued a 166-page report, detailing what it says are Israeli abuses of Palestinians. The group wants the U.S. to punish Israel by withholding aid “in accordance with its spending on settlements.”

One can be sure that Human Rights Watch, and “evangelical” bedfellows like Brian McLaren will never criticize the malevolent, hourly terror war on the Jewish state, now in its 63rd year. Please visit McLaren’s website and notice the deafening silence about Palestinian terror.

On December 18, two women (at least one of whom was Christian) were attacked while hiking in a forest near Jerusalem. Two Arab men hacked at them with knives, killing Kristine Luken, and wounding Kay Wilson. It highlights the pathetic nature of Palestinian terrorism to realize that attacks like this are virtually routine. Routine!

Yet McLaren and his soft friends will not condemn it. They are an integral part of the “thousand cuts” strategy, aimed at weakening and then finishing-off Israel.

Won’t happen. But in the meantime, innocent Jews continue to suffer.

That suffering, and the Western contribution to it, has doomed the world.