There Goes the Neighborhood

As we celebrated Thanksgiving last month, the German newspaper Die Welt published an article making a profoundly troubling claim. This kind of report from such a reliable newspaper should have sparked national concern and launched an international inquiry. Yet most of us had no idea this article even appeared.

What Die Welt reported – citing Western sources – was that Iran is planning to place medium-range missiles capable of reaching the United States on Venezuelan soil. More specifically, the article claims that when Venezuelan President Hugo Chavez visited Iran in October, the two nations signed an agreement under which:

The Scud missiles – both B and C – are relatively short range and threaten only Venezuela’s already nervous neighbors. But the Shahab 3 missiles are able to reach the United States from Venezuela. In short, if this article is correct, the United States will soon join Israel and Europe in living within Iranian missile range. 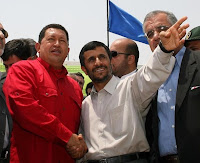 A comparison to the 1962 Cuban missile crisis is not only obvious, but instructive. At the time, the power that posed the greatest threat to American security – the Soviet Union – sought to place missiles in our backyard so as to be able to threaten our major population centers. Today, the nation that currently poses the greatest threat to American security – Iran – is seeking to do exactly the same thing.

Yet while the threats are similar, the reactions appear to be entirely different. As soon as he had solid intelligence that the Soviet Union had placed ballistic missiles in Cuba, President Kennedy demanded their removal. Although the Soviet Union was already a nuclear power with a massive conventional army capable of overrunning Europe, we did not hesitate to draw a red line around our hemisphere. The world stood at the brink of a nuclear war until these missiles were removed.

It stands to reason that, had President Kennedy known about the Soviet plans sooner, he would have acted sooner. Had we received reports of an agreement between the Soviets and Cuba to deploy these missiles, our government would have communicated to the Soviets in no uncertain terms that such a move would not be tolerated. Signals would have been sent. Lines in the sand would have been drawn.

Yet the only thing resolute about our reaction to this report about Iranian missiles is our determination to ignore it. True, it’s possible that our intelligence agencies know that this information is false. It is also possible that tough signals are being sent through back channels to prevent this agreement’s implementation. But after years of feckless failure to stop Iran’s march towards nuclear weapons, one cannot be faulted for doubting whether such moves are in fact taking place. There are too many leaks these days – of the old kind and the “wiki” kind – to allow for perfectly silent diplomacy. Silence too often correlates with inaction.

Every schoolchild learns about the Monroe Doctrine, almost two hundred years old, under which the United States declared that any intervention by foreign powers in the affairs of the Americas would be viewed as an act of aggression requiring U.S. intervention. As President Kennedy himself noted,

“The Monroe Doctrine means what it has meant since President Monroe and John Quincy Adams enunciated it, and that is that we would oppose a foreign power extending its power to the Western Hemisphere, and that is why we oppose what is happening in Cuba today.”

Yet today Iran plots and plans with Venezuela, and we remain largely silent. Have we abandoned the Monroe Doctrine? Have we opened our hemisphere to our enemies? We don’t yet know for sure. But the fact that such an article could spur so little debate and concern is deeply troubling. And where there’s no smoke, we should not be surprised to discover that there is no fire.

The prospect of a nuclear Iran has just gotten even more dangerous. And much more personal.

In Defense of Faith: The Judeo-Christian Idea and the Struggle for Humanity - David Brog (Book)