Prophecies of the Messiah

Biblical prophecy is a fascinating subject. It not only includes predictions of events that are still in the future. It also includes predictions of events that were future at the time the prophecy was given, but which have now been fulfilled and are part of the past. This latter category includes all the prophecies about a coming Messiah that Christians believe were accurately fulfilled in the life, ministry, death, and resurrection of Jesus. If the Bible really does contain such prophecies, then we would seem to have evidence that's at least consistent with the divine inspiration of the Bible. One can see how an all-knowing God could accurately foretell the future, but it's not clear how a finite human being could do so. Thus, if there are accurately fulfilled prophecies in the Bible, then we have yet another reason to believe that the biblical worldview is true.

The Place of His Birth

Let's begin with a prophecy about the Messiah's birthplace. 'Messiah' is a Hebrew term that simply means 'anointed one'. When translated into Greek, the language of the New Testament, the term becomes 'Christ'. Christians believe that Jesus is the Christ, the Messiah promised in the Hebrew Scriptures (see Mark 14:61-62).

"But you, Bethlehem Ephrathah, though you are small among the clans of Judah, out of you will come for me one who will be ruler over Israel, whose origins are from of old, from ancient times."

This prophecy was given in the eighth century B.C., more than seven hundred years before the birth of Jesus!

Notice, first, that it refers to a future ruler who will come from the town of Bethlehem. When King Herod, shortly after Jesus' birth, asked the Jewish religious leaders where the Christ (or Messiah) was to be born, they told him that he was to be born in Bethlehem and cited this verse from Micah as support (Matt. 2:1-6). Both Matthew and Luke confirm that Jesus was born in Bethlehem (Matt. 2:1 and Luke 2:4-7). So He clearly meets this necessary qualification for being the promised Messiah.

But that's not all. Micah also says that the origins of this ruler are "from of old, from ancient times." How should we understand this? One commentator notes,

"At the least this means that Messiah was pre-existent; at the most it means He is eternal."2

Micah's prophecy thus suggests that the Messiah will be a supernatural, perhaps even divine, person. And this astonishing conclusion is precisely what Jesus claimed for Himself!3

The Time of His Appearing

Let's now consider a fascinating prophecy that, in the opinion of many scholars, tells us when the Messiah would make His appearance. It's found in Daniel 9.

Daniel was one of the Jewish captives who had been brought to Babylon by King Nebuchadnezzar. The prophecy in Daniel 9 was given in the sixth century B.C. While much can be said about this passage, we must focus on a few important points.

To begin, verse 24 gives us the time parameters during which the prophecy will unfold. It reads, "Seventy 'sevens' are decreed for your people and your holy city to finish transgression, to put an end to sin," and so on. Although we can't go into all the details, the "seventy 'sevens'" concern seventy distinct seven-year periods of time, or a total of 490 years.

Next, verse 25 tells us that from the issuing of a decree to rebuild Jerusalem until the coming of the Messiah, there will be a total of sixty-nine 'sevens', or 483 years. There are two views we must consider. The first holds that this decree was issued by the Persian ruler Artaxerxes to Ezra the priest in 457 B.C.4 Adding 483 years to this date brings us to A.D. 27, the year many scholars believe Jesus began His public ministry! The second view holds that the reference is to a later decree of Artaxerxes, issued on March 5, 444 B.C.5 Adding 483 years to this date takes us to A.D. 38. But according to this view, the years in question should be calculated according to a lunar calendar, consisting of twelve thirty-day months.6 If each of the 483 years consists of only 360 days, then we arrive at March 30, 33 A.D. Dr. Allen Ross says "that is the Monday of the Passion week, the day of the Triumphal entry of Jesus into Jerusalem."7 The views thus differ on the date of Jesus' death, but each can comfortably fit the evidence.8

Finally, verse 26 says that after the period of sixty-nine 'sevens' the Messiah will be 'cut off' and have nothing. According to one scholar, "The word translated ‘cut off' is used of executing . . . a criminal."9 All of this fits quite well with the crucifixion of Jesus. Indeed, the accuracy of this prophecy, written over five hundred years before Jesus' birth, bears eloquent testimony to the divine inspiration and truth of the Bible.

The Nature of His Ministry

In Deuteronomy 18:15 Moses told the Israelites,

"The LORD your God will raise up for you a prophet like me from among your own brothers. You must listen to him."

This verse promised a succession of prophets who would speak God's words to the people. Ultimately, however, it refers to Jesus Christ. One commentator notes that the Messianic interpretation of this passage is mentioned not only in the New Testament, but also among the Essenes, Jews, Gnostics, and others.10 Peter explicitly applied this passage to Jesus in one of his sermons (Acts 3:22-23).

But not only was the Messiah to be a great prophet, it was also foretold that he would be a priest and king as well. The prophet Zechariah was told to make a royal crown and symbolically set it on the head of Joshua, the high priest. The Lord then said,

The title 'Branch' is a messianic title.11 So the scene symbolizes the future Messiah, here referred to as 'the Branch,' uniting the offices of king and priest in one person.

But why is it important that the Messiah be a priest? As a prophet he speaks God's word to the people. As a king he rules from his throne. But why must he also be a priest? "Because priests dealt with sin," says Michael Brown, a Christian scholar who is ethnically Jewish. "Priests bore the iniquities of the people on their shoulders."12 And this, of course, is precisely what Jesus did for us: "He . . . bore our sins in his body on the tree" (1 Pet. 2:24).

Dr. Brown points to a tradition in the Talmud that says that on the Day of Atonement there were three signs that the animal sacrifices offered by the high priest had been accepted by God. According to this tradition, in the forty years prior to the temple's destruction in A.D. 70, all three signs turned up negative every single time.13 Dr. Brown comments, "Jesus probably was crucified in A.D. 30, and the temple was destroyed in A.D. 70."14 So during this forty-year period God signaled that he no longer accepted these sacrifices. Why? Because final atonement had been made by Jesus!15 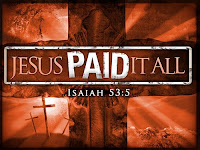 The Significance of His Death

Without any doubt, one of the most astonishing prophecies about the promised Messiah is found in Isaiah 52-53. The verses were written about seven hundred years before the birth of Jesus. They largely concern the death of the Lord's 'Suffering Servant.' According to many scholars, a careful comparison of this passage with the Gospels' portrayal of Jesus' suffering and death reveals too many similarities to be merely coincidental.

In some of the most-cited verses from this intriguing passage we read:

"He was pierced for our transgressions, he was crushed for our iniquities; the punishment that brought us peace was upon him, and by his wounds we are healed. We all, like sheep, have gone astray, each of us has turned to his own way; and the Lord has laid on him the iniquity of us all" (Isa. 53:5-6).

Here we have a vivid depiction of substitutionary atonement. The Lord lays upon His servant "the iniquity of us all" and punishes him "for our transgressions." In other words, God's servant dies as a substitute in our place. This is precisely what Jesus claimed for himself, saying, "the Son of Man did not come to be served, but to serve, and to give his life as a ransom for many" (Mark 10:45).

The parallels between Isaiah's 'Suffering Servant' and Jesus are certainly impressive. But some scholars have suggested that Isaiah's 'servant' is actually the nation of Israel and not the Messiah. Dr. Michael Brown dismisses this notion however, insisting that "nowhere in the . . . foundational, authoritative Jewish writings do we find the interpretation that this passage refers to the nation of Israel. References to the servant as a people actually end with Isaiah 48:20."16 What's more, he says,

"Many . . . Jewish interpreters . . . had no problem seeing this passage as referring to the Messiah . . . By the sixteenth century, Rabbi Moshe Alshech said, 'Our rabbis with one voice accept and affirm . . . that the prophet is speaking of the Messiah, and we shall . . . also adhere to the same view.'"17

For his part, Dr. Brown is so convinced that this passage prophetically depicts the suffering and death of Jesus that he feels "as if God would have to apologize to the human race and to the Jewish people for putting this passage into the scriptures" if Jesus is not the one in view!18 Although this is a strong statement, it's not unjustified. For Isaiah 53 not only foretells the death of God's servant for the sins of the people, it also implies his resurrection!

The Mystery of His Resurrection

In the opinion of many scholars, Isaiah 53 not only foretells the death of God's servant; it also implies his resurrection from the dead!

It's important to notice that Isaiah 53 makes it absolutely clear that the Messiah is put to death. It says that "he was cut off from the land of the living" (v. 8), and that "he poured out his life unto death" (v. 12). On the other hand, however, it also says that "he will see his offspring and prolong his days" (v. 10), and that after his suffering "he will see the light of life and be satisfied" (v. 11). So the text teaches both that the Messiah will die and that he will live again. And although the passage doesn't explicitly teach the Messiah's resurrection, it's certainly consistent with it. This is really staggering in light of the compelling historical evidence for the death and resurrection of Jesus!19

Let's now pause to consider what we've learned in this brief article. Micah 5:2 teaches that the Messiah would come out of Bethlehem, the birthplace of Jesus. Also, by teaching the preexistence, or even eternality, of the Messiah, the prophecy suggests that he'll be a supernatural, possibly even divine, figure. In Daniel 9:24-27 we saw that the Messiah would appear to Israel sometime around A.D. 27–33, precisely the time of Jesus' public ministry! Deuteronomy and Zechariah teach that the Messiah would minister as prophet, priest, and king. As a prophet, Jesus spoke God's word to the people. As a priest, he offered himself as a perfect sacrifice for our sins. And while he didn't reign as king during his first advent, he was called "the king of the Jews" (Matt. 27:11, 37). And Christians believe that he's in some sense reigning now from heaven and that he'll one day reign on earth as well (Luke 1:32-33). Finally, Isaiah 53 teaches that the Messiah would die for our sins - and then somehow live again. This is consistent with the New Testament's record of Jesus' substitutionary death and bodily resurrection.

Of course, we've not been able to consider all the prophecies. But hopefully enough has been said to conclude with Dr. Brown that if Jesus isn't the Messiah, "there will never be a Messiah. It's too late for anyone else. It's him or no one."20 Well, you've now heard the evidence; the verdict is up to you.