Dutch politician Geert Wilders was in Israel on Sunday and gave a speech in Tel Aviv at a conference of the HaTikvah movement, headed MK Prof. Aryeh Eldad (National Union).

Before the conference, MK Eldad spoke with Israel National News TV and explained his own proposed two-state solution in which two states refers to the State of Israel and the Kingdom of Jordan. Wilders, who is the leader of the Dutch Party for Freedom and who has been a staunch critic of Islam, started his speech by saying that Israel “is an immense source of inspiration for me.” He added that he is “not ashamed to stand with Israel, but proud. I am grateful to Israel. I will always defend Israel. Your country is the cradle of Western civilization. We call it the Judeo-Christian civilization with good reason.”

Wilders blamed the Arab leaders as well as Islam for what he called “the plight of the Palestinians in refugee camps in Lebanon, Gaza, and other places,” and said that ‘Palestine’, where many say that the PA Arabs should return, is, in fact located in Jordan. 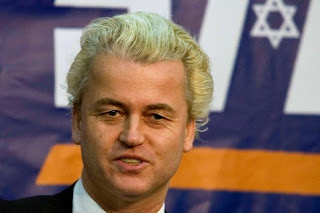 “Israel, including Judea and Samaria, has been the land of the Jews since time immemorial,” said Wilders. “Judea means Land of the Jews. Never in the history of the world has there been an autonomous state in the area that was not Jewish. The Diaspora of the Jews, which began after their defeat by the Romans in 70 C.E., did not lead to the departure of all the Jews from their ancient homeland. Jews had been living in the Jordan Valley for centuries until the Arab invaders drove them out in 1948, when the provinces of Judea and Samaria were occupied by the Hashemite Kingdom of Transjordan, which abbreviated its name to Jordan in 1950. And until 1967, when Israel regained the ancient Jewish heartland of Judea and Samaria, no one, not a single Islamic scholar or Western politician, ever demanded that there be an independent Palestinian state in the so-called West Bank.”

He added that Israel must not trade land for peace and not “assign Judea and Samaria to another Palestinian state – a second one, next to Jordan,” since, as he said, the conflict in the Middle East is not a conflict over territory, but rather an ideological battle.

Wilders mentioned the expulsion from Gaza of 2005 and said that this “sacrificing” of land by Israel did not attain peace but rather made the situation worse, simply because the conflict is ideological. “Ideologies must be confronted with the iron will never to give in, ‘never, never, never, never – in nothing, great or small, large or petty.’ That is the lesson which the world learned from Winston Churchill when he confronted the evil ideology of Nazism,” said Wilders.

He added that Israel needs defendable borders and that for this reason Jews must settle Judea and Samaria. Wilders called the Jewish communities in Judea and Samaria “an expression of the Jewish right to exist in this land. They are tiny outposts of freedom, defying ideological forces which deny not only Israel but the entire West the right to live in peace, dignity and liberty.”

Wilders also said that Islam threatens not just Israel, but the entire world, and added that “Without Judea and Samaria, Israel cannot protect Jerusalem. The future of the world depends on Jerusalem. If Jerusalem falls, Athens and Rome – and Paris, London and Washington – will be next.”

As for the PA Arabs, Wilders said that “Since Jordan is Palestine, it is the duty of the Jordanian government to welcome all Palestinian refugees who voluntarily want to settle there.” “Allowing all Palestinians to voluntarily settle in Jordan is a better way towards peace than the current so-called two-states-approach (in reality a three-states-approach) propagated by the United Nations, the U.S. administration, and governing elites all over the world,” he said. “We only want a democratic non-violent solution for the Palestinian problem. This requires that the Palestinian people should be given the right to voluntarily settle in Jordan and freely elect their own government in Amman. If the present Hashemite King is still as popular as today, he can remain in power. That is for the people of Palestine to decide in real democratic elections. My friends, let us adopt a totally new approach. Let us acknowledge that Jordan is Palestine.

Wilders concluded his speech by saying: “Toda raba [thank you]… And shalom to all of you.”