The Feast of Hanukkah … History and Prophecy

He will be succeeded by a contemptible person who has not been given the honor of royalty. He will invade the kingdom when its people feel secure, and he will seize it through intrigue. (Daniel 11:21)

In 175 BC Antiochus IV Epiphanes came to power in Syria by stealing the throne from his relative, Demetrius II, the young son of Seleucus IV Heliodorus and rightful heir. The original Seleucus was one of the four generals who divided the Greek Empire between them following the death of Alexander the Great. Thus Antiochus Epiphanes became the eighth descendant of Seleucus to sit on the throne of Syria.

Then an overwhelming army will be swept away before him; both it and a prince of the covenant (Onias III) will be destroyed. With a large army he will stir up his strength and courage against the king of the South (Ptolemy VI of Egypt). The king of the South will wage war with a large and very powerful army, but he will not be able to stand because of the plots devised against him. The king of the North (Antiochus) will return to his own country with great wealth, but his heart will be set against the holy covenant. He will take action against it and then return to his own country. (Daniel 11:22,25,28)

Soon after taking power, on his way to invade Egypt, Antiochus attacked Israel, stealing all the gold and silver furnishings from the Temple. He had Israel’s last legitimate High Priest, Onias III, murdered and from then on the office was sold to the highest bidder, with the money going to Antiochus.

The Birth of the Sadducees

He began to “Hellenize” Israel and before long many of the wealthy and influential among the Israelites adopted the Greek style of dress, cutting their hair short and shaving off their beards as well. They also argued for a blending of Greek philosophy and culture into the Jewish way of life. From these advocates of Greek thinking, the political party known as the Sadducees was born, eventually growing to a position of prominence during the time of Jesus. It was the influence of Greek philosophy on their approach to the Hebrew Scriptures that blinded the ruling Sadducees to the fact that Messianic Prophecies were being fulfilled right before their eyes during the Lord’s life on Earth.

“At the appointed time he will invade the South again, but this time the outcome will be different from what it was before. Ships of the western coastlands will oppose him, and he will lose heart. Then he will turn back and vent his fury against the holy covenant. He will return and show favor to those who forsake the holy covenant. (Daniel 11:29-30) 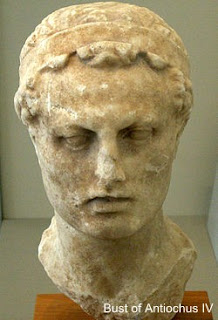 Initially, this accommodation with Greek culture encountered only vocal resistance, but that all changed when the Egyptians rebelled and, with the aid of the Roman Navy, defeated Antiochus and drove him from Egypt. In a rage, Antiochus again invaded Israel, this time demanding that he be worshiped as God. (The name “Epiphanes” comes from a title he gave himself, “theos epiphanies” or god made manifest. After this the Jews started calling him “Epimanes” which means the madman.) He outlawed the reading of the Hebrew Scripture, punishing by death anyone found with copies in their possession. Circumcision, praying, keeping the Sabbath, and worshiping the One True God were likewise proscribed with severe penalties for disobedience.

“His armed forces will rise up to desecrate the temple fortress and will abolish the daily sacrifice. Then they will set up the abomination that causes desolation. With flattery he will corrupt those who have violated the covenant, but the people who know their God will firmly resist him. (Daniel 11:31-32)

Put the Hammer Down

In 168 BC Antiochus again broke into the Temple, converting it into a pagan worship center in honor of the Greek god Zeus (called Jupiter in Roman mythology). Instead of the blood of bulls and goats, he sprinkled water in which pork had been boiled in the Holy of Holies, and slaughtered pigs on the altar. Then he erected a statue of Zeus in the Holy Place, with his own face on it, thereby proclaiming himself to be God. Because it rendered the Temple unfit for worshiping God, Jewish historians called this act the Abomination that Causes Desolation, the only event in history so named. It triggered the Maccabean Revolt.

For 3 1/2 years the Jews fought one of the world’s first guerrilla wars under Judeus Maccabeus (Judah the Hammer) finally defeating the Syrians in 165 BC. Upon regaining the Temple, they smashed the polluted altar and the statue of Zeus, grinding both to powder, and then built a new altar from uncut stones.

Next they set out to cleanse the Temple and re-dedicate it to God, an eight-day process (2 Chron. 29:17). But they could only find enough sacred oil to light the Menorah (the 7-branched lamp stand in the Holy Place) for one day, and the law required that it be lit constantly. Because the preparation of sacred oil was a time consuming process, they decided not to wait, but to use the oil they had to light the Menorah immediately, trusting that God would find this acceptable. God was pleased and made the oil last for the full eight days until the new supply was ready and the re-dedication complete.

Those who study the symbolic use of numbers in Scripture know that eight is the number of New Beginnings, and indeed the Maccabean victory over the Syrians ushered in a new era, known as the Hasmonean Dynasty. During much of this period, which lasted till about 64 BC, Judea, as Israel was now known, enjoyed independent nation status, having finally won their freedom from Syria in 142 BC. Following other Hasmonean victories, the Jews regained boundaries that nearly approximated those of Solomon’s time. Jewish rule was exercised throughout the expanded nation and Jewish life flourished once again. A New Beginning for the Children of Israel.

The Feast of Dedication

The miraculous burning of the oil is still celebrated in the eight-day Feast of Hanukkah, from the Hebrew word meaning dedication. It’s also called the Festival of Lights and this year began on the evening of December 1.

To celebrate Hanukkah, a special 9-branched candelabra is used, with eight branches commemorating the eight days when the oil kept burning. The ninth branch, called the Shamash, is usually positioned above the other eight. Its candle is always lit first and then used to light the other candles, one each day, until on the eighth day of Hanukkah all are lit. The Hebrew word Shamash means servant, so the Shamash is the servant candle that’s raised up and gives light to all the others.

Incredibly, the Hanukkia, or Hanukkah candelabra, becomes a beautiful model of the Messiah and His church. It was the Lord Jesus, the obedient servant, who was raised up (John 3:12) and gives light to all others (John 8:12). For the Son of Man came not to be served, but to serve. (Mark 10:45)

If you’ve read our studies on the Lord’s probable birth date, you know I believe He was conceived during the Feast of Hanukkah and that His life, like all others, began at conception. If so, the Hanukkia is a fitting reminder that the Light of the World arrived during the Festival of Lights, ushering in a New Beginning for all mankind.

We know that all the Levitical Feasts have both a historical and a prophetic fulfillment. For example, Passover commemorated the Jews’ freedom from bondage in Egypt and looked forward to the Messiah freeing us all from the bondage of our sins. The prophetic aspect of the Spring Feasts were fulfilled in the Lord’s 1st Coming, the summer time Feast of Pentecost commemorated the giving of the Law and was fulfilled in the Church, and the Fall Feasts commemorated God’s dwelling among them and will be fulfilled in the 2nd Coming. Hanukkah is not a Levitical Feast but I think it has an important prophetic fulfillment like the others.

In reviewing the history of Hanukkah, I’m sure you spotted the similarity to events yet future to us. One day soon a man will arrive on the world scene. He’ll become very powerful very quickly, assuming a leadership position that’s not rightfully his. Many will give their loyalty to him and he’ll conquer most of the world. Even in Israel, many will favor accommodation with him, some even thinking he might be the Messiah. (John 5:43)

But then he’ll stand in the Holy place and declare that He’s God. (2 Thes. 2:4) Another Antiochus Epiphanes. He’ll have a statue of himself erected and put in the Holy Place to be worshiped. (Rev. 13:14) Another Abomination of Desolation, the one Jesus warned about in Matt. 24:15. Just like his predecessor he’ll demand to be worshiped as God on pain of death, and make everyone swear a pledge of loyalty to him. He’ll put a stop to the recently instituted Temple sacrifice (Dan. 9:27) and try to erase every trace of the legitimate God from the world. He’ll wage war against those who oppose him, but they’ll fight back in another war of resistance. After 3 ½ years he’ll be defeated (Dan. 12:7) and the defiled Temple will be cleansed and made ready for use again during the Millennium. Another Feast of Dedication. And Israel will again experience a period of untold peace and prosperity, expanding fully to its originally promised dimensions. Jewish rule will be exercised throughout the expanded nation and Jewish life will flourish once again. (Isaiah 65:17-25) Another New Beginning for the Children of Israel and for all the world. Happy Hanukkah.

What is the abomination of desolation? - GotQuestions.org