The worst wildfire in Israel’s history had claimed the lives of 41 Israelis, burned nearly 7,500 acres of forest and countryside, and caused millions of dollars worth of damage by Friday morning, less than 24 hours after starting.

The first started shortly before noon Thursday somewhere outside the northern port city of Haifa in the heavily forested Carmel Mountain range. By the early afternoon, it was threatening a number of local towns and two prisons in the area.

Additional prison wardens were called to the area to help evacuate the prisoners. But one of the buses carrying 40 wardens misjudged the speed at which the fire was moving and was consumed by the flames en route to the prison. All 40 guards were burned alive, and the Haifa Police Department’s deputy commander, Ahuva Tomer, who was driving behind the bus, was critically injured.

The misjudgment by the bus driver and other officials was understandable. As the bus set off for the prison, winds suddenly caused the fire to start expanding at a rate of more than one mile every two minutes. Officials later said that due to the size and the speed of the fire, the bus never stood a chance.

Every firefighter in Israel (all 1,500 of them) was called to the north to help battle the blaze. Even so, by Thursday evening, the Haifa Fire Department declared that the fire was out of control and that Israel did not possess the means to stop it. 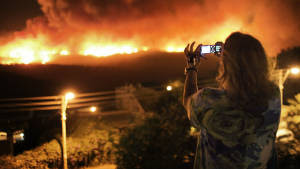 Prime Minister Benjamin Netanyahu pleaded with European nations and US military bases in the region to send aid. By Friday morning, 25 foreign firefighting aircraft, dozens of firefighters and a large amount of equipment were either en route or had arrived from Spain, Greece, Italy, Cyprus, the UK, Bulgaria, Azerbaijan, Croatia, Russia and Romania. US President Barack Obama pledged to send help from American military bases in the region. And neighbors Egypt and Jordan also pitched in to help stop the fire. Even Turkey sent two firefighting airplanes, despite mounting diplomatic tension with Israel

Despite the tremendous effort, the fire continued to burn and expand by mid-morning Friday, and was threatening the outskirts of Haifa, Israel’s third largest city, and several of the surrounding towns. More than 15,000 Israelis were evacuated from their homes.

At this time, police officials believe the fire started at an illegal landfill site, and are opening a criminal investigation. There were also early reports by fire officials that the blaze appeared to have begun at three different points simultaneously, suggesting possible arson.

However the fire started, it could never have become so destructive if not for the almost total lack of winter rainfall so far this year. Israel does not receive even one drop of rain during the late spring and summer months. And with only a handful of days with light rain so far this winter, that means Israel’s forests and countryside have received almost no rainfall for about eight months.

Unless Israel starts receiving a significant amount of winter rain, not only will the nation face possible water rationing next summer, but it will remain at risk for another devastating wildfire.