Will Chrislam Visit Your Church?

Political correctness is causing us to cave once again. Robert Spencer, Islamic expert, writes that in this whole TSA examination fiasco, what might be being missed is that the Council on American-Islamic Relations (CAIR) is demanding that Muslim women must only have a pat-down on the head and neck. The full body scans violate Islamic law. They violate common sense for all who are being subjected to the pat downs, but the only ones getting any attention are, of course, the Muslims. They denounce something, and all of our political leaders react - often in their favor.

"There are plenty of reasons to oppose naked body scanners and the recent groping incidents, but this response to Muslims from Hamas-linked CAIR exposes its Islamic supremacist agenda like nothing else does. The scanners, and the whole TSA security apparatus, exist in the first place because of Islamic jihad terrorists, and now CAIR is demanding an exemption from such scanning for the very group from which comes the subgroup that made it necessary. In CAIR's world, the one group that would be subjected to lighter airport security checks than any other group would be Muslims. And that would in turn make things easier than ever for jihad terrorists. Surely that can't be CAIR's objective, now, can it?"

Moving on to mandatory health insurance under ObamaCare, there has been confusion as to whether this applies to Muslims or not. At least three sources say Muslims are exempted from ObamaCare. Snopes says that Muslims, Scientologists, Amish, Christian Scientists, and American Indians are exempt. The American Thinker says the same thing, as well as Fox Nation. 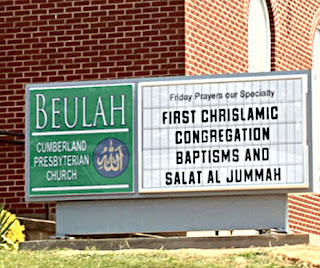 It is not just the federal government pushing these exceptions, it is also the church. Caryl Matrisciana has written extensively on "Chrislam," and her series will be extended this week. This past weekend, the Memorial Drive Presbyterian Church in Houston, along with Christian communities in Atlanta, Seattle, and Detroit, initiated a series of sermons that have been designed to produce an ecumenical reconciliation between Christianity and Islam. In addition to the sermons, the Sunday school lessons centered on the inspired teachings of the Prophet Mohammad. Qurans were placed in the pews next to the Bibles. As a matter of fact, a new term has been coined for this effort between Christians and Jews: Chrislam.

Please don't rush to join the First Chrislamic Congregation, although one may turn up in your neighborhood any day.

Matrisciana reports on her Web site, quoting a prominent pastor,

"Only 30 percent of Americans have a favorable view of Muslims, according to a Pew Forum poll. At the same time, more than half the country says they know 'not very much' or 'nothing at all' about the Islamic faith. The recent political developments and the fact that we're fighting two wars in Muslim countries should sharpen that need to know how to talk to these guys," Stallsmith insists "We want to find peace and reconciliation around a scriptural understanding of Jesus."

Well, hold on! Jesus is mentioned 25 times in the Koran, but belief in the divinity of Jesus is condemned in Islam as shirk (filth).

Another event that leads to such favoritism of the Islamic faith is the Yale Agreement of 2007, which produced A Common Word. It is viewed as one of the most important interfaith documents in nearly half a century. This led to the publication of Loving God and Neighbor Together: A Christian Response to 'A Common Word Between Us and You' . About 130 prominent Christian leaders signed on to this agreement that states Muslims and Christians worship the same God. Sorry folks...that is just blatant propaganda. [Find the Yale Agreement here as well as many signers.]

While "dialogue" with Muslims sounds like the "Christian" thing to do, it is just furthering the problems outlined earlier in this e-alert, such as granting them, and very few others, special favors and conditions. But whenever this "dialogue" is looked into, one learns that on the part of the Christians, there is no sharing of the gospel, or for that matter, any kind of biblical truth. Both sides say nice things about each other. Some Christian pastors then bring that into their pulpit because they are snowed into thinking that the Muslims really want to like us and work with Christians. They will willingly work with any Christian they can fool, and these days there are more than there should be. Thus, the birth of the Chrislam movement.

The communists have a term for such people who knowingly cooperate with their agenda: Useful idiot. We are not saying those who dialogue with Muslims and promote their agenda are idiots. What we are saying is that "useful idiots" is a term for those who are fooled into thinking that progress is being made by cooperating with the enemy.

What is far more profitable is sharing your Christian faith with a Muslim. The number of Muslims in the Middle East converting to Christianity is astounding.

Scripture is clear about uniting with unbelievers.

Do not be bound together with unbelievers, for what partnership has righteousness and lawlessness, or what fellowship has light with darkness (2 Cor. 6:14).

Finally, if you see a Koran next to a Bible in your church, flee as fast as you can. Your church has drunk the Kool-Aid. All sorts of compromises come next, including the praise of Islam as a religion of peace and can't we all just get along?

What is Chrislam? - GotQuestions.org