New polling data suggests that four-in-10 Americans now believe marriage has outlived its usefulness. Merely living together is a growing phenomenon — unheard of even a generation ago. Imagine our great-grandparents living in such a world!

There are myriad reasons but fundamentally, a growing number of Americans simply do not believe in the authority of Scripture. They do not believe the Bible is true or relevant today. This is directly responsible for the breakdown in biblical values. For a hundred years — as I’ve written many times — liberal scholars undermined Scripture and the Living God by first casting subtle doubt on the historicity of the Bible, beginning with Genesis. This is key in understanding where we are today.

As it relates to our weekly topic, Israel, this stealth attack has brought us to a point where the Jewish state is turning into a liability for the U.S. (from a purely secular or unbelieving perspective; of course we understand Israel to be critical to understanding reality).

Look, it’s like this: after decades of liberals mocking foundational truths, such as the God-instituted “one-man for one-woman” concept, we no longer know who we are. It’s elementary: God designed men and women to complement each other in every way and thus produce children and inhabit the earth. This was His mandate.

But the Genesis accounts of origins and early human history have been rendered unbelievable (which I find unbelievable) by God-hating critics, who present themselves as earnest, sincere truth seekers. In fact, they are God-haters who want everyone else to share their diabolical worldview.

Many other examples could be cited of these competing worldviews. Look at Ephesians 5:25:

“Husbands, love your wives, even as Christ also loved the church, and gave himself for it…”

If our culture believed that the Bible is true, you would see healthy marriages everywhere, instead of the train wrecks that are commonplace in our homes.

Again, more examples of the benefits of a biblical worldview could be cited, but let’s transition into our favorite topic. 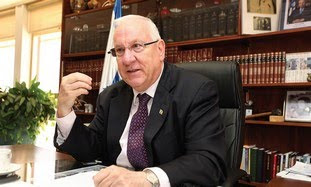 “There is definitely a new American perception that does not see Israel as a strategic asset in the Middle East for both the United States and the free world. This is a development that even we, the veteran politicians, see as something new.”

This is absolutely chilling, my friends. And yet…it perfectly fulfills Bible prophecy!

Forty years ago, on the heels of the Six Day War victory, and in a nation that still had a strong Judeo-Christian value system, it was still hard to envision a day in which Israel would be abandoned by all her allies; the U.S. was simply too strong and good.

Yet what do we learn from Jeremiah? Hear the prophet:

“All thy lovers have forgotten thee; they seek thee not…”(v. 14)

This is in the context of the time of Jacob’s Trouble. Israel will find herself abandoned by the world. In total.

People, especially pro Israel Christians, have a hard time accepting this and yet, what should we expect to happen…if we believe the Bible?

Thus, Rivlin’s comment, and the actions of change agents like Barack Obama, point directly to this very specific fulfillment of prophecy.

I even disagree with Rivlin’s statement that the U.S. (you understand, we are talking about “official U.S. policy, from Washington) “supports the Zionist idea.”

I was at a dinner for Israeli spokesman David Bar-Illan in Washington, in 1997. David was a treasure, and a group of congressional leaders and pro Israel supporters wanted to honor him for his contributions to not only the Jewish state, but to the cause of freedom everywhere.

Some old-guard congressional leaders that night were passionate defenders of Zion. It was a wonderful evening.

I wonder today, as I write this, how long there will be staunch supporters of Israel in the United States Congress.

A couple weeks ago, I had the pleasure of visiting with long-time prophecy teacher Noah Hutchings of Southwest Radio Church.

In April, Hutch will celebrate 60 years with the ministry! He is still going strong, and has a terrific new book out, 40 Irrefutable Signs of the Last Generation. It is well-researched and very well presented, and an added important feature is that it draws on Hutch’s decades of observations on the prophetic scene.

I find it quite ironic that a man like Noah Hutchings is scorned by media elitists and leaders (and not only in the secular world, but sadly, the Church), while a man like Barack Obama is toasted the world over.

Hutch, though, believes the Bible and he knows well that Israel is a key to understanding reality and the world in which we live.

He knows that Israel is about to be abandoned, but you know, there is such a gentle peace about him. He doesn’t seem worried in the least.

Much of the world does not.

Prophecy matters because it reveals to us a loving, involved, and all-powerful God. He has shown us the way and proven Himself to our puny minds.

That’s why Reuven Rivlin’s comments, though disturbing, in fact confirm that there is nothing in this world and the wider universe that has escaped God’s attention.

The haters are getting louder. As they do, they fulfill the very prophecies they deny!

[Check out Jim’s group (http://www.prophecymatters.com/ ) for site upgrades and added features and initiatives. We are making a push for a big 2011, to share with a hurting world that Bible prophecy does indeed matter for individuals, no matter where they are. PM will be announcing exciting new features in the coming weeks and we invite you to join us!]

Apologetics: Why the Bible is Trustworthy - FaithFacts.org