TSA: An Exercise in Totalitarianism

There is a growing backlash against the stepped-up security screening at airports in the wake of foiled Islamic terrorism attempts. The outcry is coming from airline crew members and travelers, including parents of children.

The new rules that have set people off involves everyone being forced to pass through body-scanning machines that show a naked image of themselves to a Transportation Security Administration (TSA) agent. If travelers find this too intrusive, the alternative option is a physical pat-down that would qualify as sexual groping.

There are also health concerns over being exposed to x-rays. The risk is probably low for someone who travels once or twice a year. However, the business traveler who goes on hundreds of trips each year would be at profound risk from radiation exposure.

The father of a young girl posted his disgust with the new procedures in a news forum:

Another traveler had sharper words:

"The TSA has ruined flying for me, seriously. After my last trip - and I won't comment beyond the fact that refusing the full body x-rays apparently gives them the right to waive all your constitutional rights - I won't fly again. I'm done. Finished. If the airline industry wonders what kills them in the next couple of years, well, it's the goose-stepping (Nazis) at the TSA, that's who."

One gentleman thought of a novel way to speed up the process and make the TSA feel equally uncomfortable:

"Yesterday, I had the full pat-down at DCA after going through the full-body scanner (which, for some reason, always flags me). About halfway through, I said, "I don't think my boyfriend touches me as much as you do." What I learned: It's amazing how much starting a gay panic in a TSA agent can move these things along."

I've had to fly six times this year, and each time I felt like I had to surrender my constitutional rights for the privilege of traveling from point A to point B. Many times, the TSA agents act like grade-school bullies who feel they have the power to push me and the rest of the passengers around.

Someone took a photo of a TSA office that had a computer with a disturbing desktop background. The image was a children's book parody titled "My First Cavity Search," which showed a boy facing two TSA agents in rubber gloves. Here is a link to a page that shows the office and the image: (Link). 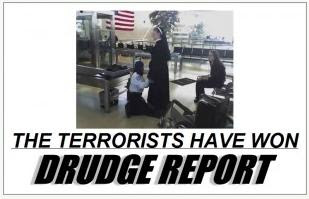 Being a TSA agent has to be the most worthless job in the planet. I don't recall a single time when they captured a terrorist trying to sneak a bomb onto a plane. The only purpose they serve is to act as an obstacle based on past attempts.

Our nation is infected with a cancer of totalitarianism. Just like what happened in dozens of dictatorial regimes, peace and security was used as a ploy for taking away people’s liberties. We have reached a level of absolute lunacy with these naked-body scans and pat-downs. If the public is willing to put up with this nonsense, then the government might as well start opening our mail or putting cameras in our homes.

Until the American people finally decide to say "enough is enough," the power of Big Brother is going to continue to grow. The Obama administration is preparing to set new policies that will give the Feds greater control over the Internet. Another plan calls for all emails and mobile phone text messages to be stored for six months by Internet service providers (ISPs).

It is just insanity for us to be playing this game with terrorists. You can't pack the world in bubble wrap. These Islamic extremists have an endless number of options they can us in attacking us.

We have the power to solve this problem. If we would stop being so politically correct and make the worshipers of Allah pay the cost of Islamic terror, things might turn around. Since 100 percent of all terrorist attacks are carried out by these people, they should be the ones being scrutinized at the airport. Any fool knows how pointless it is to electronically strip search an eighty-year-old woman from Des Moines, Iowa, who is going to visit her grandkids in Dallas.

I can hear bin Laden laughing in his cave now as he learns about all the holiday travel snarls that will result from this latest security measure.

TSA: Despite objections, all passengers must be screened - CNN