If you will indulge me this week…for over three years I have written weekly about Israel. I will again today, but in a different way. I hope you will see why.

On Friday afternoon, I was laughing with a friend when I looked down at my phone and a text from another friend. She and I joke and tease each other a lot, former high school classmates. But as I read her text, I realized she wasn’t joking. Another classmate in our hometown had been found dead in his home.

He had been found on the floor of his home, where he lived alone. He had died of natural causes, only in his late 40s (like me!).

I just got back from the visitation, and will attend the funeral tomorrow, then a gathering of family and friends to reminisce.

I just hate it that Buzz is gone. So sudden.

When I got home from the visitation, I got a text message from my wife, who is a nurse in an ER. She told me that she had just finished with a 10-year-old drowning victim. A girl who looks like our granddaughter.

Devastating. I felt so sorry for my wife, for the family of this dear girl. I also felt tremendous sorrow for this old world.

This world is dying, and groaning while doing it. Gasping. I find that people are desperate to understand reality, and these are people in the church and outside the church.

I am now at an age where I see the end much clearer than I did 30 years ago, when we would joke around with Buzz and have a root beer float at the local drugstore. Frankly, I find that the burdens and cares of this life are like a wet blanket, and the truth is, we all have this blanket around our shoulders.

Our three sons were home last night for dinner; they are all grown now. Our daughter was close by, visiting a friend. It was a real blessing knowing they are all close. I had been struggling with Buzz’s death all weekend, and really reflecting on life.

Then this morning I was online, talking to an Israeli friend of mine. A highly placed guy. We were talking about the usual things — the physical threats to Israel and that kind of thing. All of a sudden though he said, “But we’re here. We are alive.” I imagined him smiling as he said it. His home is very near the Old City of Jerusalem and when I’m there, we walk over during the evening to a hill overlooking the floodlit walls. 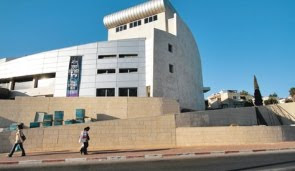 After our conversation, I read the Jerusalem Post online and noticed an item about a multicultural center that has just opened in Ariel, the largest Israeli city in Judea/Samaria. The center opened with a performance and was attended by politicians, including Ariel Mayor Ron Nachman.

I met Nachman once, in Ariel, and was impressed with his pioneering spirit as a Jew settling the modern land of Israel.

The cultural center has been boycotted by some, because it was built beyond the “Green Line,” the alleged future border between Israel and “Palestine.”

The boycott and the controversy surrounding it represent the evil of this world, the wet blanket of oppression that weighs all of us down. The world cannot celebrate Israel, and in fact finds its very existence hateful.

And yet…Nachman and his fellow citizens are alive in the land of Israel today and I will tell you, my friends — all of my dear friends who read this column each week — that is a comfort that passes all understanding. This lone miracle, albeit huge and casting a gigantic shadow over an unbelieving world, takes the wet blanket off our shoulders and replaces it with the warmth of the living God, who has identified himself in Scripture as the God of Abraham, Isaac, and Jacob.

Praise the name of the Lord, who has already defeated death, and will one day soon make all things new.

In this season of Thanksgiving, amid the death and sadness and decay we must all live in at the moment, reflect on the fact that God has brought the Jews back just as he said he would so long ago.

This is enough to sustain us in a world in which precious children die, and friends leave us suddenly.

Wherever you are in your life — and many are struggling mightily — I hope you can pause for even a moment and reflect on the fact that, as the Psalmist said, the Lord has favored Zion…in our time. This tells us unequivocally that time is running out on evil.

The clock is ticking and it is getting louder.

Israel to allow in thousands of Ethiopians - Reuters

What is the land that God promised to Israel? - GotQuestions.org