Netanyahu to US: Time to Really Threaten Iran

Israeli Prime Minister Benjamin Netanyahu reiterated to Obama Administration on Sunday that without a credible threat of force, the Iranian regime would continue its steady march toward acquiring nuclear weapons.

“The only way to ensure that Iran is not armed with nuclear weapons is to create a credible threat of military action against it, unless it stops its race to obtain nuclear weapons,” Netanyahu reportedly told US Vice President Joe Biden when the two men met on the sidelines of the Jewish Federations of North America General Assembly in New Orleans. 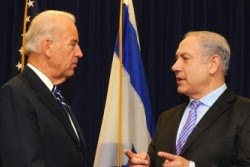 Netanyahu noted that while sanctions had some affect on the Iranian regime, their quest for nuclear arms goes beyond political considerations.

A former Iranian Revolutionary Guard explained last week in an interview with Israeli radio that the Iranian regime is committed to ushering in the chaos and havoc they believe will bring forth the Islamic messiah, and so [will not hesitate to use nuclear weapons against their enemies], regardless of the political and diplomatic consequences.

Responding to Netanyahu, US Secretary of Defense Robert Gates rejected the idea of putting the threat of force against Iran front and center and making it more credible.

Gates, who is currently visiting Australia, insisted that the Obama Administration believes diplomacy is still the way forward, despite the fact that such measures have had little or no impact on Iran’s defiant nuclear program for the better part of the past decade.

Many in Israel fear that the West simply does not understand the nature of the Iranian threat, and are instead taking the erroneous view that Iran is like the former Soviet Union. According to that logic, Iran may acquire nuclear weapons, but will never actually use them because of the destructive retaliation that would result.

But whereas the Soviet threat was political and ideological, the Iranian threat is driven purely by a radical religious theology that cares nothing for political repercussions.

US to Maintain Iran Sanctions - VOA

US sources: Netanyahu is out of sync on military buildup against Iran - DEBKAfile