The Morning After — What Does it All Mean?

The meaning of the 2010 election is destined now to be the Great Debate of the next political season. While this is true after most election days, it is especially true this year, given the scale and scope of the political change this election will bring about. The scale is seismic and the scope is vast. In terms of national politics, this election amounts to a megashift.

What does it all mean? It is far too early to answer that question in any comprehensive sense. After all, a good number of the races are yet too close to call. We do know that Republicans will control the U.S. House of Representatives, and by a considerable margin. The political equation of the Senate has been reset, as has the context in many of the states. For the third national election in a row, the party in power received a resounding repudiation — a political reversal that is clearly intended to send a message.

What are we to make of this?

First, we must remember that elections are about ideas. A seismic election like this one is especially about ideas. In this case, an unmistakable message was directed to President Barack Obama. There was a massive judgment on his policies and leadership. His ideological liberalism is not shared by a majority of America’s voters. His association with the values of the intellectual elites and his commitment to an expanding role of government distanced him from the electorate. Americans will now watch to see if the President got the message.

Second, it will take some time to discover how this new Congress will function. There is no shared philosophy of government yet to be detected, only a few shared principles and impressions. There is a vast distance between running for office and holding office. Campaigning and governing require different skill sets and different commitments. There will be a lot of reality therapy in coming weeks. 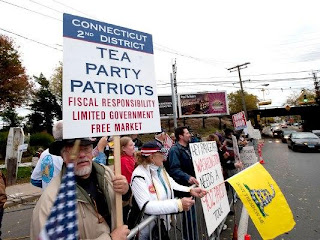 Third, Americans will soon learn the difference between conservatism and libertarianism. A good many of the new faces in Washington will have been supported by the Tea Party movement, and a good number of these are committed to the worldview and political philosophy of libertarianism. Many conservatives are as yet unable to tell the difference. They are likely to learn fast.

Fourth, the relative absence of hot-button social issues from the election debate will not last. The issue of same-sex marriage will inevitably be nationalized within the next two years, in the courts if not in Congress. The issue of abortion will not go away, nor will human embryonic stem cell research and a host of other controversies. Even as these issues are reshaped by new developments, you can count on them coming back to the forefront.

Fifth, the demographics of this election tell a number of interesting stories. The most interesting of these is the relative withdrawal of the youth vote so crucial to the momentum behind the Obama campaign in 2008. Statistics available late on election night indicate that the fall-off in the youth vote may be as high as half. Are younger Americans interested only in electing a President?

Sixth, a political shift of this magnitude beings a multitude of personal consequences. One of the limitations of the democratic process is that it offers very few opportunities to lose an office or a campaign without losing heart. Among those who lost their seats last night were many who had served for years. They, along with staff, must now pack up their belongings, close out their business, and make way for the new. Even those who worked for their defeat must understand the personal trauma. Good men and women put their lives on hold and ran in races they lost. Last night many of them had to make the call they dreaded to make, and then deliver the speech no one wants to deliver. This, too, deserves our notice.

Evangelical Christians have moved through several phases of political engagement in recent decades. Coming out of wilderness years of relative withdrawal from interest in politics, evangelicals joined the Religious Right with eagerness and great expectations. But, even as some important legislative and bureaucratic victories were won, the Religious Right never fulfilled its many promises. Now, a good many evangelicals, young and old, are rethinking the political equation once again.

Evangelicals tend to swing between extremes when it comes to politics and elections. We are too easily elated and too readily depressed. Make no mistake, the election results of 2010 will lead to big changes in Washington and far beyond. That in itself is good news. But all this must be put in a truly Christian context.

Christians are supposed to be the people who know the dangers of investing either too much confidence in the political system, or too little. The election is over. Now is the time for Christians to pray for those who were elected and for the government they will serve. Things are going to get interesting fast.