David Neff is editor-in-chief for Christianity Today. The magazine is still considered to be mainstream and representative of evangelicals. It was founded when Ike was president, and it is amazing how many Christians consider CT to be their friend. In reality, it is center-left and fairly contemptuous of the issues conservative Christians hold dear.

Witness Neff's recent Facebook post, in which he cites a Wall Street Journal piece about the Ground Zero mosque. Neff said that "all the negative attention" the mosque project has received has in fact helped amass a war chest for the building of the mosque. Again, Neff was citing the WSJ article, but one wonders why he seems to aim a weird web of blame at Americans who find the mosque both offensive and potentially dangerous.

Of course, the editorial staff at CT has a long history of center-left stances.

During the first Gulf War, an editorial in the magazine went into useful idiot mode, claiming that Iraqi "Foreign Minister" Tariq Aziz was in fact a Christian. Aziz was a Christian in the sense that he apparently belonged to an Eastern Orthodox church.

Readers with even a moderately high IQ will understand that Aziz was a Christian like Hermann Goering was a Christian. Your religious affiliation isn't a bonus when you're brutalizing human beings.

Goering, the good Lutheran, was not a Christian. Aziz, a Chaldean Catholic, joined the Baath Party in 1957. Why would CT push his alleged Christian heritage when he was a key figure in the grotesquely abusive Saddam Hussein regime?

Leftist media types, especially Christian, will often change the subject in such a conversation and ask something like, "Well, where was your criticism when the Reagan administration was cozying up to Saddam?"

A fair question, but in another conversation. Notice this tactic of shifting focus away from the subject at hand: Why do center-left Christian media whitewash totalitarian regimes?

Worse, why do they denigrate allegedly fellow evangelicals?

In 1998, CT ran a cover story in which the target was evangelicals who support Israel and the teaching of Bible prophecy. It was a real hatchet job, complete with caricature figures of key prophecy teachers on the cover. It was deeply offensive, but CT just rolls along, somehow fooling even conservative Christians who think the magazine's keepers are "one of us."

Much of what passes for Christian media today is really at odds with traditional, biblical perspectives. Again, though, it's almost astonishing that large numbers of Christians seem unaware of it. Americans are too trusting. 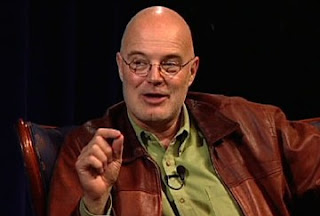 Writer / blogger / activist / teacher / celebrity Brian McLaren churns out books and blogs and appears serene and reasonable. He is popular today and is known for his tolerance.

Except that he's not tolerant at all. Read his blogs and discover what he thinks of what we'll call Bible-believing Christians. He believes the so-called Christian Zionists are fairly dangerous to world peace. He'll never criticize those who are actually dangerous, such as Muslims, who can't believe their good luck that so many don't see the symbolic nature of the Ground Zero mosque.

And I've written before about the seismic changes going on in Christian book publishing circles. The fact is, many of the same people move in and out of these various communities, from the pure book publishers to magazine staffers. If CT pumps the books of, say, Baker Publishing Group, we understand they are promoting a shift toward the views of the so-called Emergents, whose Jell-o-like theology is hard to pin down … except when they are criticizing Bible-believing Christians.

There appear to be cultural pressures that are pushing traditional evangelicals toward a center-left worldview. This is a nice way of saying they are caving to Obama. That's a general statement, granted.

Yet we see the shift in Christian media. Stephen Strang, a stalwart supporter of Israel for years, wrote in a Christmas blog a few years ago about his encounter with a Palestinian Christian activist. Sadly, the blog gave a platform for a fairly standard PLO line: Israel's security fence has walled in the Palestinian people, etc.

One could say that this example is really stretching it. That is false. In reality, Strang's blog is part of a trend toward a general center-left perspective. For example, you rarely see an investigative piece (unless it's from someone like Aaron Klein) about, say, the necessity of Israel's security fence. Rather, today Christian media tell us about the oppression of the Palestinian people.

Another example of the leftward drift of Christian media is found in the online version of Relevant magazine (published by Strang's son, Cameron).

In a new article entitled "Gay and Christian?" Joel Wentz writes, "Until we begin to adopt humility and critically examine our own assumptions regarding this topic, I fear little progress will be made in reconciling these two cultures. Perhaps it is not as simple as 'love the sinner, hate the sin.'"

The point I'd like to make is that here we see a prime example of the leftward drift among Christian media. A generation ago, while there would have been many examples of what we might call "gay bashing," there would also have been a theological stance that would clearly state the biblical view. Not so today. The Wentz article incorporates a narrative style that has proven to be effective today for those with the worldview of, say, Brian McLaren.

Today, we have a shift to the left. Formerly solid support for Israel, or the Bible in general, is now sliding to a presentation that would make the editorial staff of Pravda smile.

Who Really Runs America and the Media? - Lighthouse Trails (Blog)