As President Obama Hits Israel Again, Canada's Prime Minister Yet Again Proves Himself to Be the Most Pro-Israel Leader on the Planet

President Barack Obama unfairly criticized Israel yesterday while visiting Indonesia, the world’s largest Muslim country. While visiting mosques and meeting Muslim leaders and giving speeches about building better relations with Muslims, the President gratuitously chose to criticize the Jewish State for daring to announce the building of some 1,300 new apartments in Jerusalem to deal with the city’s population growth. The President said such moves were an impediment to the peace process with the Palestinians.

“This kind of activity is never helpful when it comes to peace negotiations,” said President Obama. “I’m concerned that we’re not seeing each side make the extra effort involved to get a breakthrough…Each of these incremental steps can end up breaking trust.”

Unhelpful? Breaking trust? You’ve got to be kidding me. Netanyahu imposed a 10 month moratorium on new building in Jerusalem and the West Bank as a goodwill gesture to the Palestinians to encourage them to begin direct peace negotiations. Yet Palestinian leader Mahmoud Abbas squandered nine of those months by refusing to enter such talks. Then Abbas engaged for a few weeks, but refused to recognize Israel as a Jewish State, refused to agree to the Palestinians having a demilitarized state, and now has broken off direct talks and refuses to reengage with Netanyahu, even though Israel is offering to allow the creation of a Palestinian state.

He is absolutely correct. Israel has every right to build homes for Jews, Muslims and Christians in her capital. The “unhelpful” intransigence is on the Palestinian side. If Abbas wants a state, he should negotiate for one directly and in good faith, not wait for President Obama to force Israel to accept Abbas’ demands.

Moreover, the critical question facing the U.S., Israel, and the world right now should not be stopping the building of apartments in Jerusalem but stopping the building of nuclear weapons in Iran. Yet the Obama administration is not taking decisive action to stop Iran from getting the Bomb, and refuses to put a credible military threat against Iran on the table. 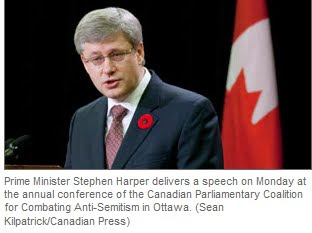 Contrast President Obama’s deeply unfriendly approach towards Israel with Canadian Prime Minister Stephen Harper’s consistently courageous pro-Israel approach. This week, Prime Minister Harper delivered a major address saying he and the people of Canada will continue to stand with Israel and defend the Jewish people no matter what the cost.

“As long as I am prime minister, whether it is at the UN or the Francophonie or anywhere else, Canada will take that stand, whatever the cost,” Harper told a conference on anti-Semitism. ”Not just because it is the right thing to do but because history shows us, and the ideology of the anti-Israeli mob tells us all too well, that those who threaten the existence of the Jewish people are a threat to all of us.”

“We must be relentless in exposing this new anti-Semitism for what it is,” Harper said. According to a report by the Canadian Broadcasting Company, Harper noted that Israel, like any country, may be subjected to fair criticism, he said. But Harper said Canada must oppose what he called the “three Ds — demonization, double standards and delegitimization.”

“‘And like any free country Israel subjects itself to such criticism, healthy, necessary, democratic debate. But when Israel, the only country in the world whose very existence is under attack, is consistently and conspicuously singled out for condemnation, I believe we are morally obligated to take a stand.’”

Please lift Harper and his family, advisors, and his country up to the Lord. Please ask the Lord to bless them, to continue giving them courage and boldness. Please ask the Lord, as well, what we as evangelical Christians can do to properly thank and bless the Prime Minister for the courage of his convictions.

Canadian PM Harper: A Threat to Jews Is a Threat to All of Us - Arutz Sheva