At the risk of showing my age, I can remember a time when considering which Study Bible to purchase was an easy affair. One had only a few to choose from: Scofield, Thompson, Nave, and a few more. Well, those days are well and truly gone. What is one to make of the current situation? Options fill out the pages of Bible catalogs. Within the long lists of contemporary Study Bibles there are good and not so good choices. I’ve even come across ones with metal covers (who dreams up these things?) But in our consumer-culture there’s always room for one more, right? How, then does the new Apologetics Study Bible rate?

It would be helpful in a review of a work like this to first provide a general overview of what one will encounter in The Apologetics Study Bible (hereafter TASB). 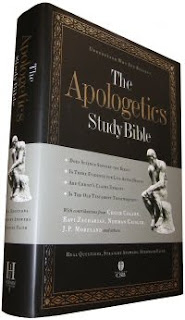 First, the translation is the Holman Christian Standard Bible, a fairly formal correspondence version done by the Southern Baptists, usually accurate and quite vivid (especially in the Prophets). The study notes and book introductions are provided by recognized Bible scholars, many of whom were contributors to the New American Commentary series. This feature of TASB does not appear to be geared towards the subject of apologetics, but the material is good, reflecting a wise decision to expound the text itself instead of affixing clipped apologetic digressions to a biblical passage.

The apologetics entries are in the form of brief articles of approximately one to one and a half pages long. There are about 130 of these articles, touching upon all sorts of topics relating to the defense of the Christian faith. In addition to these articles, there are many “Twisted Scripture Texts” treated, plus cameos of twelve “Notable Christian Apologists,” assorted Charts and Maps, and an Annotated Bibliography.

Turning to the articles first we find that the General Editor, Ted Cabal, has enlisted the help of many of the foremost apologists of the day, including Ravi Zacharias, J.P. Moreland, Norman Geisler, Scott Rae, Paul Copan, and Gary Habermas. The standard of the articles is generally high when one considers the space limitations the writers worked within. TASB is definitely slanted towards an evidentialist perspective, but presuppositionalists will not encounter as many objectionable entries as they might suspect. Among the best are a well balanced answer to the question of the Days of Genesis (Cabal); a dismissal of macroevolution (Phillip Johnson); articles on canon and manuscript transmission (Geisler), a firm response, from a clear complementarian viewpoint, to the charge that Christianity demeans women (Sharon James); a helpful essay on Christianity and Eastern Religions (Winfried Corduan), and an excellent little article on Postmodernism (Douglas Groothuis), along with a good treatment of the OT’s witness to the Messiah (Michael Rydelnik). Lesser moments include an under par article on Christ as the fulfillment of OT prophecy (the late D. James Kennedy); the dousing of the literal flames of Hell, and the decided teaching of replacement theology whilst addressing the use of the OT in the New (Copan); and a treatment of the age of the Earth that is biased against Young-Earth Creationism (Cabal). In a few cases, (e.g. God’s sovereignty and human responsibility) more than one viewpoint is given, as there with Middle Knowledge (W.L. Craig) and Moderate Calvinism (Ware) represented.

The biographies of important apologists were mostly penned by Cabal and are useful (although more reserve ought to have been employed in the case of Origen, who arguably undermined the faith more than he contributed to its defense). The entries dealing with perverted Scripture texts by R. Alan Streett do a good job of alerting readers to the way cultists misuse parts of the Bible to further their own ends. The Charts are attractive but are of varying degrees of usefulness, while the able Annotated Bibliography provided by Doug Groothuis is a welcome feature, even if the author is allergic to presuppositionalist contributions.

Overall, the Apologetics Study Bible is a solid effort, worthy of the attention of any one who is in the market. It succeeds much more than it disappoints, and deserves the qualified recommendation of one who has perhaps grown too suspicious of the modern glut of Study Bibles. Still, one wonders what’s next, the “Worldview Study Bible”?

What is presuppositional apologetics? - GotQuestions.org

I Don't Have Enough Faith to Be an Atheist - Norman L. Geisler (Book)