While most of us have never bitten into a blue tomato, chances are we have eaten genetically modified organisms, or GMOs, as part of our daily diet. An estimated 70 percent of the food products sold in grocery stores come from plants that have been genetically altered to grow faster, larger, or more pest-resistant. Gregor Mendel taught us a great deal about genetics by hybridizing pea plants, but today's biochemists can introduce genes from one organism into another, causing concern among those who wonder exactly how these modified foods will affect us.

The issue is hot in Europe right now. Last week, European Union farm ministers rejected a proposal to leave the matter of GM foods up to the individual member states. States might rule against GM foods on their own with greater ease than a unified EU would, giving the big farm countries a bit of motivation to promote the Union in this case. Monsanto's Mon 810 maize has already been banned by Austria, France, Germany, Greece, Hungary, and Luxembourg. Poland has outlawed all GM crops.

Italy's farm minister Giancarlo Galan said, "Italy does not support the proposal ... Each for himself undermines the foundations of the common agricultural policy (CAP)."

"France wants a common decision," agreed French minister Bruno Lemaire. "Opting for national decision-making would give a wrong signal to European citizens and a wrong signal for the common agricultural policy."

China, Japan, the EU, Korea, Australia and New Zealand require foods containing GMOs to be labeled, and countries like the UK have banned GMOs for the most part. However, the FDA does not require US farmers or food manufacturers to mention genetically modified plants among the ingredients on product labels, and the FDA considers both GM and non-GM foods safe for human and animal consumption. 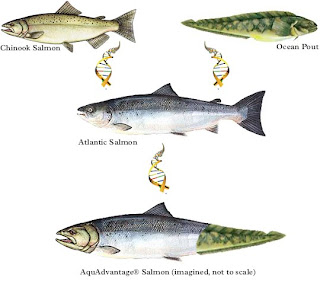 Of immediate concern in both the United States and Europe is AquAdvantage - aka "Frankenfish" - which grows to maturity in just 18 months, half the time it takes a normal salmon. This GM fish is intended to protect salmon populations from overfishing and produce a high-protein food for the growing world population. Biochemists combined genes from a farmed Atlantic salmon, a wild chinook salmon, and an eel-like fish, the eelpout, to build their creation. The FDA declared the fish safe for human consumption last month, and if the fish is approved for sale, it will be the first GM animal to be legally placed on human dinner plates. The FDA has yet to decide on whether to label the food as coming from a GMO source.

GM foods are credited with a variety of benefits. Tomatoes with expressed snapdragon genes have been engineered to produce high levels of anthocyanins, which are linked with hindering cancer, diabetes, obesity and heart disease. The "enviropig" has been donated a bit of mouse DNA that makes its piggy poop lower in phosophorous, and therefore more environmentally friendly. Bioengineers produce chimeras that grow faster and bigger and last longer on the shelf. Yet, just because we can do it doesn't mean that we should.

Genetically tweaked plants, the creatures who eat them, and the land used to grow them haven't been sufficiently monitored or tested over generations, and there is a dearth of information about their impact. GMO advocacy agencies purport that the majority of America's genetically enhanced crops, such as soy and feed corn, are produced for and fed solely to animals. However, humans in turn eat those animals. The EPA has approved certain GM grains for farm use as cattle feed, but some farmers claim they were not told about "animal-only" consumption and have sold corn and other products to US food manufacturers, resulting in foods on grocery store shelves that test positive for Bt toxins. Bt toxins are harmful to insects and are found in pest-resistant GMO strains of corn, potato, canola, soybeans and cotton.

The precautionary jury is still out. Genetic modifications have allowed farmers to grow more food, heartier plants, and grow them faster and less expensively, meeting the needs of ever-increasing human populations. But if GMOs prove over time to be hazardous to human or food stocks' health, the repercussions will affect us all.

Something’s fishy in the FDA - The Hill