The Scott Brown Precedent and Israel

On Tuesday, US voters are set to repudiate US President Barak Obama's agenda for their country. Unfortunately, based on his behavior in the face of a similar repudiation last January, it is safe to assume that Obama will not abandon his course.

Last year, in an attempt to block Obama's plan to nationalize healthcare, Massachusetts voters elected Republican Scott Brown to the Senate. Brown was elected because he pledged to block Obamacare in the US Senate.

Rather than heed the voters' message and abandon his plans, Obama abandoned the voters. Instead of accepting his defeat, Obama changed the rules of the game and bypassed the Senate.

So it is safe to assume that for the next two years, Obama will do everything he can to bypass the Congress and govern by executive orders and regulations. Although much can be done in this fashion, Congress's control of the purse strings will check his domestic agenda.

In matters of foreign policy however, Obama will be less burdened by - but not immune - to Congressional oversight. We can therefore expect him to devote far more energy to foreign affairs in the next two years than he devoted in the last two years.

This bodes ill for Israel. Since entering office, Obama has shown that his primary foreign policy goal is to remake the US's relationship with the Muslim world. Obama has also repeatedly demonstrated that compelling Israel to make concessions to the Palestinians and empowering international institutions that seek to delegitimize Israel are his preferred means of advancing this goal.

To date, Obama's demands on Israel have focused on blocking construction and delegitimizing Jewish communities in Judea and Samaria and Jewish neighborhoods in Jerusalem. And as far as he is concerned, Israel's response to his demands to date has been unsatisfactory. In light of this, at a minimum we can expect that in the immediate aftermath of next Tuesday's elections, Obama will deliberately provoke a new crisis in US relations with Israel over Jewish building in Jerusalem, Judea and Samaria.

But of course, this isn't Obama's only option. Indeed, he has nearly unlimited options for making life unpleasant for Israel. Obama doesn't even have to be the one to provoke the next crisis. He can simply take advantage of crises that the Palestinians provoke.

The Palestinians are threatening to provoke two such crises in the next several months. First, Palestinian Authority Chairman Mahmoud Abbas is threatening to ask the UN Security Council to pass a resolution declaring all Israeli communities beyond the 1949 armistice lines illegal and requiring the expulsion of the 450,000 Israeli Jews who live in them.

Second, the PA's unelected Prime Minister Salam Fayyad is threatening to declare independence without a treaty with Israel next summer.

Simply by not opposing these deeply aggressive initiatives against Israel, Obama can cause Israel enormous harm.

Other outlets for pressure include stepping up harassment of pro-Israel groups in the US, holding up the transfer of arms to Israel, pressing for the IDF to end its counter-terror operations in Judea and Samaria, and expanding US financial and military support for the Palestinian army. All of these moves will doubtless be employed to varying degrees in the next two years. 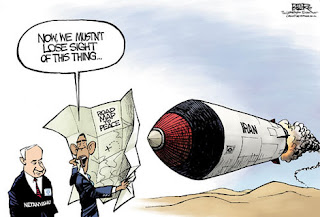 This onslaught on Israel will be implemented against the backdrop of a dynamic regional strategic environment. The evolving threats that Israel faces include among other things, Iran's acquisition of a nuclear arsenal, and Iran's takeover of Lebanon, Gaza and Syria. Israel also faces the likelihood that instability and fanaticism will engulf Egypt after President Hosni Mubarak dies and that Jordan will be destabilized after US forces vacate Iraq.

Over the next two years, Israel will be required to contend with these developing threats in profound ways. And over the next two years, all of Israel's actions aimed at mitigating these threats will need to be taken with the certain knowledge that the country will be in and out of crises with the Obama administration throughout. Whatever military actions Israel will be required to take will have to be timed to coincide with lulls in Obama-provoked crises.

The one good thing about the challenge Obama presents to Israel is that it is a clear cut challenge. The Scott Brown precedent coupled with Obama's track record on Israel demonstrate that Obama will not modify his anti-Israel agenda to align with political realities at home, and there is nothing that Israel can do that will neutralize Obama's hostility.

By the same token, the massive support Israel enjoys among the incoming Republican majority in the House of Representatives is a significant resource. True, the Republicans will not enjoy the same power to check presidential power in foreign affairs as they will have in domestic policy. But their control over the House of Representatives will enable them to shape public perceptions of international affairs and mitigate some administration pressure on Israel by opening up new outlets for discourse and defunding administration initiatives.

Against this backdrop, Israel must craft policies that maximize its advantage on Capitol Hill and minimize its vulnerability to the White House. Specifically, Israel should adopt three basic policy lines. First, Israel should request that US military assistance to the IDF be appropriated as part of the Defense Department's budget instead of the State Department's foreign aid budget where it is now allocated.

Second, this move is supported by the Republicans. Rep. Eric Cantor, who will likely be elected Republican Majority Leader has already stated his interest in moving military assistance to Israel to the Pentagon budget. The Republicans wish to move aid to Israel to the Pentagon's budget because that assistance is the most popular item on the US foreign aid budget. Not wishing to harm Israel, Republicans have been forced to approve the foreign aid budget despite the fact that it includes aid to countries like Sudan and Yemen which they do not wish to support.

When the government announces its request, it should make clear that in light of Israel's economic prosperity, Israel intends to end its receipt of military assistance from the US within five years. Given the Republicans' commitment to fiscal responsibility, this is a politically sensible move. More importantly, it is a strategically critical move. Obama's hostility demonstrates clearly that Israel must not be dependent on US resupply of military platforms in time of war.

The second policy direction Israel must adopt involves stepping up its efforts to discredit and check the Palestinian political war against it. Today the Palestinians are escalating their bid to delegitimize Israel by expanding their offensive against Israel in international organizations like the UN and the International Criminal Court and by expanding their operations in states like Britain that are hostile to Israel.

Israel must move aggressively to discredit all groups and individuals that participate in these actions and cooperate with its allies who share its aim of weakening them. For instance, Rep. Ileana Ros-Lehtinen who is expected to be elected Chairwoman of the House Foreign Relations Committee has been seeking to curtail US funding to UN organizations like UNRWA whose leaders support Hamas and whose organizational goal is Israel's destruction.

Prime Minister Binyamin Netanyahu and his ministers must lead the charge discrediting groups like UNRWRA, the ICC, and the UN Human Rights Council. Since the Obama administration seeks to empower all of these organizations, at a minimum, such an Israeli policy will embolden Obama's political opponents to block his policies by curtailing US funding of these bodies.

The Palestinians' threats to declare independence and define Israeli communities as illegal are clear attempts on their part to shape the post-peace process international landscape. Given their diplomatic strength and Israel's diplomatic weakness, it is reasonable for the Palestinians to act as they are.

But two can play this game.

Israel is not without options. These options are rooted in its military control on the ground, Netanyahu's political strength at home and from popular support for Israel in the US.

Israel should prepare its own unilateral actions aimed at shaping the post-Oslo international agenda. It should implement these actions the moment the Palestinians carry through on their threats. For instance, the day the UN Security Council votes on a resolution to declare Israeli communities in Judea and Samaria and Israeli neighborhoods in Jerusalem illegal, Israel should announce it is applying Israeli law to either all of Judea and Samaria, or to the large Israeli population centers and to the Jordan Valley.

If properly timed and orchestrated, such a move by Israel could fundamentally reshape the currently international discourse on the Middle East in Israel's favor. Certainly it will empower Israel's allies in the US and throughout the world to rally to its side.

The challenge that Washington now poses to Israel is not unprecedented. Indeed for Netanyahu it is familiar.

During his first tenure as prime minister, Netanyahu faced a similar predicament with the Clinton administration. In October 1998, then president Bill Clinton was about to be impeached. The Republicans stood poised to expand their control over the House of Representatives. Paralyzed domestically, Clinton turned to Israel. He placed enormous pressure on Netanyahu to agree to further land concessions to Yassir Arafat in Judea and Samaria. In what became the Wye Memorandum, Clinton forced Netanyahu to agree to massive concessions in exchange for which, Clinton agreed to free Jonathan Pollard from prison.

At the time, Israel's allies in Washington enjoined Netanyahu not to succumb to Clinton's pressure. They argued that in his weakened state, Clinton had limited capacity to harm Netanyahu. Moreover, they warned that by caving to his pressure, Netanyahu would strengthen Clinton and guarantee that he would double down on Israel.

In the event, Netanyahu spurned Israel's allies and bent to Clinton's will. For his part, Clinton reneged on his pledge to release Pollard.

Netanyahu's rightist coalition partners were appalled by his behavior. They bolted his coalition in protest and his government fell. Rather than stand by Netanyahu for his concessions, Clinton and the Israeli Left joined hands to defeat him in the 1999 elections.

The lesson Netanyahu learned from this experience was that he cannot trust the political Right to stand by him. While not unreasonable, this was not the main lesson from his experience. The larger point is that Netanyahu must not delude himself into believing that by falling into the arms of the Left he will win its support.

The post-election Obama administration will make the lives of Israel's leaders unpleasant. But Netanyahu and his ministers are not powerless in the grip of circumstances. They have powerful allies and supporters in Washington and the confidence of the Israeli people. These are formidable assets.

Islamic Jihad leader: Israel must be wiped out of existence - Ha'aretz

Shackled Warrior: Israel and the Global Jihad - Caroline B. Glick