Members of the U.S. House and Senate who over the past two years have followed President Obama’s lead on major economic policy issues like raising taxes, spending and the national debt already know they are facing the wrath of angry voters on Election Day this November. But according to an intriguing new poll released Monday, candidates who have supported President Obama’s antagonistic policies towards Israel and appeasing policies towards Iran in the past several years will find still further opposition at the ballot box. 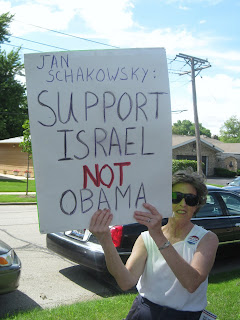 The survey of 1,000 American voters, conducted by the respected national polling firm of McLaughlin & Associates, shows that a majority of Americans who are likely to turn out to the polls this November are pro-Israel. They are deeply worried about the ayatollahs in Iran getting the Bomb. They don’t believe President Obama knows how to stop Iran from getting nuclear weapons. They believe the President is being unfair and unfriendly towards Israel. They believe he is biased in favor of the Palestinians. What’s more, a majority of voters say they are more likely to support a candidate who is clearly identified as pro-Israel than one who is not.

The poll was commissioned by the Emergency Committee for Israel, an organization founded by William Kristol, the Jewish editor of The Weekly Standard, and Gary Bauer, the evangelical Christian writer and speaker who formerly headed up the Family Research Council and now runs a group called American Values.