President Obama is pushing the reset button on his national security program in order to create a better record for his 2012 campaign but his choice of a new national security adviser dooms the effort from the start.

Evidence of that reset came last week with the early resignation of national security adviser retired Marine Gen. Jim Jones and the announcement of his replacement, Tom Donilon, Jones’ deputy. Although Jones had intended to resign by early 2011, his departure was accelerated by critical comments attributed to him in Bob Woodward’s new book Obama’s Wars, such as his reference to Obama’s political advisers as the “politburo,” a term for the policy-making committee of a Communist party.

Gen. Jones isn’t the only member of Obama’s national security team to leave, which gives credence to the reset opportunity. Secretary of Defense Robert Gates and Chairman of the Joint Chiefs Adm. Mike Mullen are leaving and Secretary of State Hillary Clinton may leave to oppose her boss in 2012 or she might take Gates’ Pentagon job.

These departures and perhaps others like Homeland Security Secretary Janet Napolitano clear the way for the well-entrenched Donilon to revamp Obama’s national security record before the 2012 campaign. That is why understanding Donilon is important and specifically understanding his personality, business practices, and priorities.

Gen. Jones’ personality was an awkward fit in the hard-charging, informal Obama campaign-mode White House. He wasn’t willing to work the extreme hours like others and some aides accused Jones of failing to protect Obama from criticism about his lack of national security experience.

But Donilon, 55, has the personality and background tailor-made for the Obama White House. He is a long-time Democrat political operative and Washington insider with experience working for three Democrat administrations and a heavy dose of work-aholicism, which translates that he is out of touch with reality despite outward appearances of being busy. 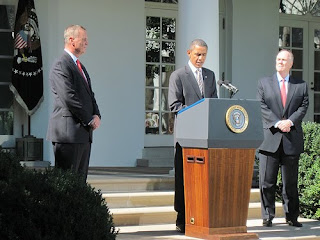 Jones has reservations about Donilon. Earlier this year Jones confronted his deputy about three foibles which are common among Washington insiders like Donilon, according to Woodward. First, Donilon’s view of national security is like that of the proverbial professor in the ivory tower anchored to theory, not based on firsthand perspectives. That is why Jones reportedly told Donilon, “You have no credibility with the military.”

Jones encouraged his deputy to travel overseas to garner practical experience. This summer Donilon visited Afghanistan and last month he traveled to China to meet Chinese President Hu Jintao but a couple overseas trips cannot make up for years of working in the field nor gain credibility and the military’s trust.

Second, Jones cautioned Donilon about his tendency for making inappropriate comments and snap judgments. Jones said Donilon often made absolute declarations about places he had never visited and leaders he has never met, according to Woodward.

Jones cited the time Donilon demanded the resignation of the commander of the U.S. Southern Command for responding too slowly to the earthquake in Haiti. Jones said this was an example of how Donilon made a snap judgment without knowing the facts, according to Woodward.

Secretary Gates shared Jones’ concerns about Donilon’s tendency to make inappropriate comments, Woodward wrote. Gates said Donilon’s spur-of-the-moment comments offended him so much that he nearly walked out of an Oval Office meeting.

Finally, Jones said Donilon had poor people skills, according to Woodward. He displayed “too little feel for the people who work day and night.” A related foible was evident in his relationship with senior military leaders.

Gates felt Donilon did not understand the military or treat its senior leadership with sufficient respect. Perhaps that is why Gates told Jones, according to Woodward, that Donilon, a rich lawyer and former Fannie Mae vice president, would be a “disaster” as Obama’s national security adviser.

But last week Gates distanced himself from that comment by releasing a statement welcoming Donilon’s appointment and said he has a “good working relationship” with the new national security adviser.

It is also important to understand Donilon’s business practices which are evidenced by his performance as a technocrat with a politics first mentality. He views national security and foreign affairs with an eye on domestic politics and how they might impact his boss. Jones on the other hand reportedly never caught on to the political side of the job, according to Politico.

Donilon’s political sense quickly won Obama’s confidence even though the two never met prior to the presidential campaign. He is also politically well-connected — close to former Obama Chief of Staff Rahm Emanuel and a long-time adviser to Vice President Joe Biden and Donilon’s wife is Jill Biden’s chief of staff.

Jones complimented Donilon for being an outstanding technocrat. At his farewell news conference Jones acknowledged Donilon “kept the trains running on time, and your energy and your dedication is without equal.” White House staff also praised Donilon as a tireless manager with the ability to navigate among different factions.

One official told the Washington Post that Donilon “has been running the national security council since the start. Jones was kind of a CEO [chief executive officer] and Tom has been the COO [chief operating officer].” He excels at keeping everything focused and coordinates security policy across the government. This is the traditional role played by former national security advisers like Condoleezza Rice and Sandy Berger.

Early in his tenure Donilon carved out the “deputies meetings” as his venue for influencing national security and to keep “the trains running on time.” He has run more than 300 such meetings that include top officials from across the federal security bureaucracy. He uses that forum for making policy decisions and formulating strategy.

Outsiders should also understand Mr. Donilon’s priorities, especially his desire to “re-balance” American foreign policy. That will be music to the ears of those who share Donilon’s skepticism about the Afghanistan war and especially Democrats who want their President to address more pressing national security problems in preparation for the 2012 election.

Last fall during the administration’s Afghan strategy debate, Donilon vigorously opposed the military’s request for more troops arguing the U.S. could not engage in what he termed “endless war.” He strongly defended Obama’s decision to set a timeline for beginning to withdraw from Afghanistan starting next summer.

Now that Donilon is the national security adviser he will oversee the comprehensive review of the strategy in Afghanistan this December. He is expected to use his new power to cement an exit strategy to satisfy Obama’s alleged concern “I can’t lose the whole Democratic party” over Afghanistan.

Donilon’s “re-balance” means not only his intention to disengage American forces from Afghanistan and Iraq but also to refocus efforts on China, an emerging super power with a growing military, the nuclear standoffs with Iran and North Korea, and other emerging crises.

Secretary Gates’ original assessment was correct — Donilon will be a “disaster” as a national security adviser because he puts his political strategy first, lacks international experience, and has serious personality flaws. This wrongheaded appointment dooms the reset from the start and is made worse by the fact that Obama has no international experience or credibility with national security professionals.

The Return of Sandy Berger - The American Conservative

Is it time for more attacks? - Washington Times (Frank Gaffney)

A Political Hack and Fannie Mae Democrat - The American Spectator