One EMP Burst and the World Goes Dark

End-of-the-world novel? A video game? Or could such a scenario loom in America's future?

There is talk of catastrophe ahead, depending on whom you believe, because of the threat of an electromagnetic pulse triggered by either a supersized solar storm or terrorist A-bomb, both capable of disabling the electric grid that powers modern life.

Electromagnetic pulses (EMP) are oversized outbursts of atmospheric electricity. Whether powered by geomagnetic storms or by nuclear blasts, their resultant intense magnetic fields can induce ground currents strong enough to burn out power lines and electrical equipment across state lines.

"We are not today hardened against this," he told a Heritage Foundation audience last year. "It is an enormous catastrophic threat."

Meanwhile, in Congress, a "Grid Act" bill aimed at the threat awaits Senate action, having passed in the House of Representatives.

Fear is evident. With the sun's 11-year solar cycle ramping up for its stormy maximum in 2012, and nuclear concerns swirling about Iran and North Korea, a drumbeat of reports and blue-ribbon panels center on electromagnetic pulse scenarios.

"We're taking this seriously," says Ed Legge of the Edison Electric Institute in Washington, which represents utilities. He points to a North American Electric Reliability Corp. (NERC) report in June, conducted with the Energy Department, that found pulse threats to the grid "may be much greater than anticipated."

There are "some important reasons for concern," says physicist Yousaf Butt of the Harvard-Smithsonian Center for Astrophysics in Cambridge, Mass. "But there is also a lot of fluff."

At risk are the more than 200,000 miles of high-voltage transmission lines that cross North America, supplying 1,800 utilities the power for TVs, lights, refrigerators and air conditioners in homes, and for the businesses, hospitals and police stations that take care of us all.

"The electric grid's vulnerability to cyber and to other attacks is one of the single greatest threats to our national security," Rep. Ed Markey, D-Mass., said in June as he introduced the bill to the House of Representatives.

Markey and others point to the August 2003 blackout that struck states from Michigan to Massachusetts, and southeastern Canada, as a sign of the grid's vulnerability. Triggered by high-voltage lines stretched by heat until they sagged onto overgrown tree branches, the two-day blackout shut down 100 power plants, cut juice to about 55 million people and cost $6 billion, says the 2004 U.S.-Canada Power System Outage Task Force.

Despite the costs - most of them from lost work - a National Center for Environmental Health report in 2005 found "minimal" death or injuries tied directly to the 2003 blackout — a few people died in carbon monoxide poisonings as a result of generators running in their homes or from fires started from candles. But the effects were pervasive: Television and radio stations went off the air in Detroit, traffic lights and train lines stopped running in New York, turning Manhattan into the world's largest pedestrian mall, and water had to be boiled after water mains lost pressure in Cleveland.

"It is a well-understood phenomenon," says Butt, who this year reviewed geomagnetic and nuke blast worries in The Space Review.

"A lot of the questions are what steps does it make sense to take," Legge says. "We could effectively gold-plate every component in the system, but the cost would mean that people can't afford the rates that would result to pay for it."

"The high-altitude nuclear-weapon-generated electromagnetic pulse is one of a small number of threats that has the potential to hold our society seriously at risk," concluded a 2008 EMP Commission report headed by William Graham, a former science adviser to President Reagan. 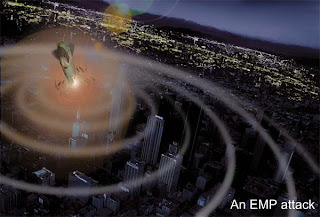 In the nuclear scenario, the detonation of an atomic bomb anywhere from 25 to 500 miles high electrifies, or ionizes, the atmosphere about 25 miles up, triggering a series of electromagnetic pulses. The pulse's reach varies with the size of the bomb, the height of its blast and design.

Gingrich last year cited the EMP Commission report in warning, "One weapon of this kind that went off over Omaha would eliminate most of the electrical production in the United States."

But some take issue with that.

"You would really need something the size of a Soviet H-bomb to have effects that cross many states," Butt says. The massive Starfish Prime blast, he notes, was at least 70 times more powerful than the atomic bomb detonated over Hiroshima in 1945, and it may have blown out streetlights but it left the grid in Hawaii intact.

One complication for rogue nations or terrorists contemplating a high-altitude nuclear blast is that such an attack requires a missile to take the weapon at least 25 miles high to trigger the electromagnetic pulse. For nations, such a launch would invite massive nuclear retaliation from the USA's current stockpile of 5,000 warheads, many of them riding in submarines far from any pulse effects.

Any nation giving a terror group an atomic weapon and missile would face retaliation, Butt and others note, as nuclear forensics capabilities at the U.S. national labs would quickly trace the origins of the bomb, Butt says. "It would be suicide."

On the solar front, the big fear is a solar super storm, a large, fast, coronal mass ejection with a magnetic field that lines up with an orientation perfectly opposite the Earth's own magnetic field, says solar physicist Bruce Tsurutani of NASA's Jet Propulsion Laboratory in Pasadena, Calif.

Tsuritani and other solar physicists view such an event as inevitable in the next 10 to 100 years.

"It has to be the perfect storm," Tsuratani says.

"We are almost guaranteed a very large solar storm at some point, but we are talking about a risk over decades," Butt says. Three power grids gird the continental U.S. — one crossing 39 Eastern states, one for 11 Western states and one for Texas.

Although the physics underlying the geomagnetic and nuclear pulses are fundamentally the same, they have different solutions. A geomagnetic storm essentially produces a long-building surge dangerous to power lines and large transformers. A nuclear blast produces three waves of pulses.

Limiting the risk from the geomagnetic-storm-type threat involves stockpiling large transformers and installing dampers, essentially lightning rods, to dump surges into the ground from the grid. Even if such steps cost billions, the numbers come out looking reasonable compared with the $119 billion that a 2005 Electric Power Research Institute report estimated was the total nationwide cost of normal blackouts every year.

"EMP is one of a small number of threats that can hold our society at risk of catastrophic consequences," Graham testified to a congressional committee last year, endorsing such mitigation steps.

Stephen Younger, former head of the Defense Threat Reduction Agency, last year argued against the catastrophic scenarios in his book, The Bomb, suggesting the effects of a pulse would be more random, temporary and limited than Graham and others suggest.

The June NERC report essentially calls for more study of the problem, warning of excessive costs to harden too much equipment against the nuclear risk. "If there are nuclear bombs exploding, we have lots of really, really big problems besides the power grid," Legge says.