It was Lebanese-based Iranian Revolutionary Guard units and the Hezbollah-militia that assumed security control for Iranian President Mahmoud Ahmadinejad's visit yesterday to Lebanon, according to a senior Lebanese politician.

"The Lebanese Army was just the cover for Iranian Guards based in Lebanon and for Hezbollah, which both assumed full security control for Ahmadinejad," said the politician, speaking on condition of anonymity.

"This shows how Iran can take over Lebanon's security when needed," he said.

The purported security coordination may be the latest sign of widening Iranian and Syrian influence over Lebanon, whose pro-democracy leadership recently had hoped to orient the country toward the West.

Another sign is Ahmadinejad's visit itself, which was clearly aimed at consolidating Iranian control over Lebanon and proving U.S. influence in the region is on the decline.

Speaking at a press conference alongside Lebanese President Michel Suleiman, Ahmadinejad tried to fan tensions between Lebanon and Israel.

"We seek a unified, modern Lebanon, and we will stand with the people and government of Lebanon – and with all elements in the Lebanese nation – until they achieve all their goals. We completely support the Lebanese people's fight against the Zionist enemy."

Secretary of State Hillary Rodham Clinton countered, "We reject any efforts to destabilize or inflame tensions within Lebanon." 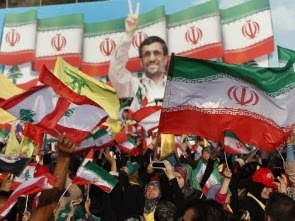 The Associated Press reported thousands of Lebanese – mainly Hezbollah supporters – came out to greet Ahmadinejad, lining the highway from the airport into Beirut, waving Lebanese and Iranian flags while loudspeakers blasted anthems, and women in the crowd sold Hezbollah flags and balloons to onlookers.

Ahmadinejad is slated to make public appearances expected to draw giant crowds in two Hezbollah strongholds – one in south Beirut and another today in Bint Jbeil, a border village that was bombed during the 2006 Israel-Hezbollah war.

According to local Lebanese reports, the Iranian president will also visit the border town of Maroun A-Ras, where Hezbollah has built a replica of the Temple Mount in Jerusalem festooned with an Iranian flag.

Israel has sought to keep a low profile during Ahmadinejad's visit near its northern border.

Still, an unnamed Israeli official told Israel's Haaretz newspaper the Iranian leader's visit shows that Lebanon "has joined the axis of extreme nations which object to the peace process and support terror."

Israel is on heightened alert for possible attacks by the Iranian-backed Hezbollah organization in Lebanon, according to a senior Israeli defense official speaking to WND last week.

The probe is reportedly set to indict members of Hezbollah for the murder. The indictments may come as soon as the next few weeks, reports have claimed.

As such, Hezbollah may try to carry out attacks against Israel similar to those that prompted the 2006 Lebanon War. During the conflict, Hezbollah fired constant rocket barrages into Israel, killing 43 Israelis and wounding more than 4,200.

By its inaction, Israel permits Iran's annexation of Lebanon - DEBKAfile

Netanyahu: Israel's very existence is our answer to scorners like Iran - Ha'aretz