Ahmadinejad, Hezbollah and the 2010 Elections

Iranian President Mahmoud Ahmadinejad arrived in Beirut Wednesday morning for a highly provocative trip to Lebanon. He was greeted by tens of thousands of Radical Muslims as a hero of the Islamic Revolution and will soon visit the border with Israel. His mission: to rally the terrorist forces of Hezbollah for an apocalyptic war with the Jewish state that will set the stage for the coming of the Shia Islamic messiah known as the “Mahdi” or the “Twelfth Imam.”

But annihilating Israel is not the ultimate objective for Ahmadinejad or Hezbollah. Israel, in the End Times theology of both Ahmadinejad and Hezbollah leader Sheikh Hassan Nasrallah, is only the “little Satan.” The U.S., they believe, is the “Great Satan” and must be annihilated, too.

By large margins, American voters instinctively understand that the strengthening of the Iranian-Hezbollah alliance poses not only a grave and growing danger to Israel, but also to U.S. national security. But voters are increasingly concerned that President Barack Obama and Congressional Democrats don’t get it. They worry Democrats have neither the wisdom nor the will to protect the American people or allies like Israel from Radical Islam, and this could cost their party at the polls in a few weeks.

Consider the findings of a new survey released this week by McLaughlin & Associates, a nationally respected polling firm:

Americans are right to be worried. With Iran’s help, Hezbollah has become the most dangerous Shia Muslim terrorist organization in the world. Consider a sampling of Nasrallah’s statements in recent years: Nasrallah is not just talk. He practices what he preaches. That’s why Ahmadinejad counts him such a close and reliable ally. 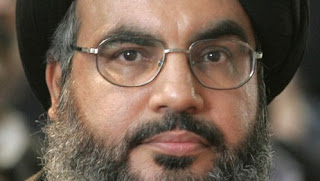 He helped found Hezbollah in 1982 with direct Iranian funding, training, and organizational assistance. He then helped build it into an enormous force with aid and ongoing strategic and tactical guidance from Iran. By 1983, Nasrallah and his team had already recruited and trained some two hundred jihadists. On October 23 of that year, they launched the truck bombing of the U.S. Marine barracks, killing more Americans at one time than any terrorist had before that point. The attack resulted in “the largest non-nuclear explosion that had ever been detonated on the face of the Earth,” according to a U.S. federal court judge who later found the Islamic Republic of Iran liable for perpetrating the crime and awarded the surviving American families some $2.6 billion in damages.

By the time of the Second Lebanon War against Israel in 2006, Hezbollah had more than 6,000 trained jihadists in their network compared to 170,000 IDF forces and over 400,000 Israeli reservists. Yet under Nasrallah’s leadership, Hezbollah was widely perceived to have won that month-long showdown.

Terrorist attacks by Hezbollah have extended far beyond the suicide truck bombings of the U.S. Marine barracks in 1983. According to the U.S. State Department’s 2008 Patterns of Global Terrorism report, Hezbollah was also behind the 1984 attack on the U.S. Embassy annex in Beirut; the 1985 hijacking of TWA flight 847, during which a U.S. Navy diver was murdered; the kidnapping, detention, and murder of Americans and other Westerners in Lebanon in the 1980s; the 1992 attacks on the Israeli Embassy in Argentina; the 1994 attack on the Argentine-Israeli Mutual Association (AMIA) in Buenos Aires; and the 2000 kidnapping of three Israeli soldiers and an Israeli noncombatant.” In 2004, Nasrallah’s forces began training members of the Iraqi “Mahdi Army” — the Shia terrorist group run by Moqtada al-Sadr — to attack and kill U.S., Coalition, and Iraqi military forces, as well as Iraqi civilians.

Now, with Ahmadinejad’s encouragement and financing, Nasrallah is building what he believes will be the ultimate fighting force to destroy the U.S. and Israel in the “End of Days.”

According to Hezbollah documents captured by Israeli soldiers during the 2006 war, Nasrallah has recruited 42,000 Muslim children ages eight to sixteen into a jihadist youth movement known as “the Imam al-Mahdi Scouts.” The children are immersed in understanding Shia eschatology —End Times theology — about the coming of the Twelfth Imam. They study the lives and teachings of Nasrallah and current Iranian Ayatollah Khamenei, whom they refer to as their “commander-leader.” They wear camouflage suits, paint their faces black, and swear an oath to participate in jihad against Jewish and Christian infidels. According to official organization documents, 120 members have already died in terrorist actions, including as suicide bombers. Once they turn seventeen, they are encouraged to join Hezbollah’s formal military units.

Meanwhile, Ahmadinejad has helped Hezbollah build up a force of more than 30,000 missiles and rockets aimed at Israel, despite a U.N. Security Council resolution forbidding the rearmament of such terror groups after the 20-6 war with Israel. Now imagine both Ahmadinejad and Nasrallah with nuclear warheads.

Americans are worried, and they are increasingly convinced that neither President Obama nor his party are up to the task of stopping the Radicals. Nor do they believe liberals are giving proper backing to faithful allies like Israel who live on the front lines. To be sure, fear of Radical Islam is not the primary issue motivating voters this fall. The economy and jobs still top the list. But given the hostile political environment Congressional Democrats are already operating in, voter perceptions of their party as weak on national security and appeasers of Iran will be costly and could add to the center-right electoral tsunami that seems to be building momentum.