In the Garden of Good and Evil

Tradition says that Jerusalem is the site of the Garden of Eden. For various reasons (primarily the global flood, which obliterated Earth’s surface), I doubt it. Still, it would seem fitting that God’s dwelling place would be where perfection reigned.

This past week, the contrasts between good and evil couldn’t have been sharper, as former U.S. President Jimmy Carter met with terrorist killers in Damascus, and Benjamin Netanyahu injected some sanity into the scenes of madness known as the “peace process.” 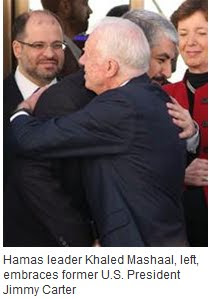 Carter met with Hamas terrorist leaders in Damascus, grinning and shaking hands and declaring that the Palestinians are being “caged” in Gaza.

Meanwhile, Netanyahu declared that air travel in the region just got riskier, since Hamas has anti-aircraft missiles in Gaza.

It is outrageous that Carter, who used his long-time Southern Baptist credentials to present himself as a peacemaker, is chatting with murderers.

As we see the broad outlines of the end-time coalition armies prepping for war against Israel, it is interesting that while the political operatives (if one can call Hamas terrorists “politicians” — Carter does) are holding meetings, the infrastructure necessary to link armies is being developed in the heretofore inaccessible areas of the Middle East.

Equally interesting is the fact that the Iranians see ultimate victory in the path to Jerusalem.

In Iran, a highway construction project known as Shrine to Shrine is being heralded as one of the most ambitious ever seen. The six-lane, 600-mile highway will link Qom, Tehran, and Mashhad. The project is under the control of the Revolutionary Guards’ construction firm, Khatam-ol Anbiya, along with the Transportation Ministry and Melli Bank.

In typical narcissistic fashion, Iranian President Ahmadinejad said the project could be an inspiration for the entire world. Reportedly, the Iranians are in the process of constructing 3500 miles of highways and a thousand miles of railway lines across the country.

It seems that on most fronts, the bad guys are making great progress in their insane attempts to choke the life out of Israel. Remember, never before have all the pieces necessary for a global attack on Israel been more evident: political, cultural, and military preparations are underway to isolate the Jewish state further.

It is to Netanyahu’s credit that he never appears rattled, at least in public.

The Israeli public is making no move to change the government, a reality that the country was plagued with for years. They understand that Netanyahu understands the threats to Israel. So while the Iranians not only continue with their nuclear ambitions and the building of infrastructure, the Israelis continue to insist, publicly, that the Arabs recognize Israel as the Jewish state, with its capital in Jerusalem.

How telling that the Palestinians and all their Arab cousins do not do that. Even Jordan’s King Abdullah, whose nation has a treaty with Israel, continues to fan the flames of war by appeasing the radicals. Abdullah is an opportunistic politician like his father. And he is considered to be somewhat friendly to Israel!

Yasser Abed Rabbo, an advisor to PLO chief Mahmoud Abbas, said the other day that the Palestinians would not remain committed to the Oslo Accords forever, unless Israel makes significant compromises, and former Palestinian “Prime Minister” Ahmed Qurei pulled out the intifada card by saying essentially the same thing, that the Palestinians might return to “armed struggle” in order to achieve their “rights.”

These outrageous comments seem reasonable to a world that has lost its moral compass.

Scripture tells us that one day, the world will accept Israel’s legitimate rights in Jerusalem. Until that day, when peace comes like a tranquil garden, we must endure and pray.

Palestinians say Israeli settlements are unilateral steps, so we can take them too - Canadian Press