Are You a Calvinist?

I get that question all the time. And it is almost always in the form of an accusation. It is also almost always asked in relationship to one of two doctrines espoused by Calvin, predestination and eternal security.

John Calvin (Jean Cauvin) was an influential French theologian at the time of the Reformation.

Calvin broke with the Roman Catholic Church around 1530 and fled to Basel, Switzerland where he published his reasoning in a work entitled ‘Institutes of the Christian Religion’.

Calvin developed what are now called the ‘Five Points of Calvinism’ under the acronym TULIP:

Calvinism is one of two schools of thought within Protestant theology. If one claims the title of ‘Protestant’, one is either a Calvinist or an Arminian.

Arminianism is the other model within mainstream Protestantism. It is named for Jacob Arminius, a Dutch contemporary of Calvin. Arminianism does not advance ideas of its own, but draws its doctrine from its opposition to Calvinism.

Are you an Arminian? What did you decide? Are you a Calvinist? Or an Arminian? Or did you find yourself hovering somewhere between the two? Is that even possible? What does it mean?

Are you hopelessly confused?

If you are a bedrock Calvinist or a bedrock Arminian, then you probably self-identify with a recognized Protestant denomination; Lutheran, Methodist, Presbyterian, Episcopalian, etc. 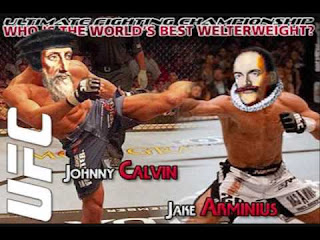 And one can be a Christian and not be either a Catholic or a Protestant.

Those Christians are derided as ‘Fighting Fundies’ or just plain old ‘born-agains’ - and most also qualify as prophecy nuts. For my part, I’m neither a Calvinist nor an Arminian. I’m just a Christian with a Bible. And I believe that the Bible lays out twelve undertakings of God concerning salvation, any one of which are sufficient to prove eternal security is a Bible doctrine, not a religious one.

I’ve given you a lot of verses and provided links that you can follow to see the context in which they were written.

The Bible doesn’t contradict itself. Don’t let anybody steal your victory with a bunch of religious claptrap about Calvinism and tulips and Arminius. Religion never saved anybody.

“Trust in the Lord with all thine heart and lean not unto thine own understanding. In all thy ways, acknowledge Him, and He shall direct thy paths.” (Proverbs 3:5-6)

Calvinism vs. Arminianism - which view is correct? - GotQuestions.org

Falling Away? A Study Of Hebrews 6 - BPB (Jack Kelley)

Chosen But Free: A Balanced View of God's Sovereignty and Free Will - Norman L. Geisler (Book)