Grain Yields Takes a Sudden Turn for the Worse

I use several guidelines to determine which news event should be the focus of my "Nearing Midnight" articles. One of the most important rules I follow is to pursue stories that can be supported with repeated examples. If prophecy is progressing, we’re to likely see it have an impact on a number of areas. Earlier this year, I reported on major earthquakes in Haiti and Argentina, and I referenced a list of similar strong quakes that had occurred over the past decade.

We are now seeing a trend in food production. All over the world, crop yields have suddenly declined. Fears of a global food crisis swept the world’s commodity markets as prices for staples such as corn, rice, and wheat have shot up. The U.S. government sparked a huge grain rally when it warned of dramatically lower supplies. For the first time since 1997, the U.S. corn stock is expected to drop below 1 billion bushels.

The source of the problem is a host of adverse weather events. What is amazing here is the sudden run of bad luck for nearly every key grain exporter. Here is a list:

The fall in grain supplies has prompted countries such as Russia and Ukraine to impose export restrictions on grains. Big importers in the Middle East and North Africa have started to hoard supplies, which has further tightened the market.

Long-term factors are at work to keep supplies tight.

Corn has also emerged as an important feed for livestock in China, India, and other parts of Asia. Families who for generations have raised cows, sheep, pigs, and poultry in their own backyards are buying meat from commercial producers working on an industrial scale and who use corn to fatten the animals.

In China, a longer-term shift in diet has increased the demand for meat, stretching the country’s traditional self-sufficiency in corn. Beijing is set to import at least 1 million tons of the grain this year. (www.ft.com/cms/s/0/36deb566-d55e-11df-8e86-00144feabdc0.html)

A large part of our corn crop goes for fuel production. The ethanol industry now consumes 4.7 billion bushels, more than a third of the crop. Despite the fact that it takes more energy to make ethanol from grain than the combustion that ethanol produces, the farm lobby will make sure there is no change to the status quo. 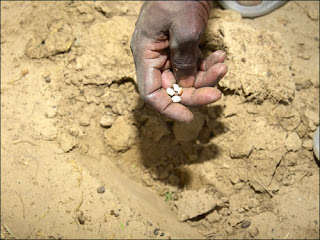 It is extremely odd to have such wide-scale reduction in crop yield. Normally, a region that experiences a shortfall is balanced out by another with a surplus. The 2011 crop is going to be vital in restoring stability to the grain markets. If we have another bad year, we may face a global shortage the likes of which has not been seen since World War II.

The state of the grain supply is very important to Bible prophecy. The book of Revelation predicts a time will come when food will be very scarce. Any movement towards greater famine could be an indication that the rider on the black horse is getting ready to roll.

“When he opened the third seal, I heard the third living creature say, ‘Come!’ And I looked, and behold, a black horse! And its rider had a pair of scales in his hand. And I heard what seemed to be a voice in the midst of the four living creatures, saying, ‘A quart of wheat for a denarius, and three quarts of barley for a denarius, and do not harm the oil and wine!’” (Rev 6:5-6).

Unsaved people often ask me if they can have my car or money once we Christians are gone. I always tell them that it’s more likely that they will be rummaging through my kitchen cabinets looking for canned goods. A wiser choice for these folks would be to come to Christ and be ensured a seat at the great feast that will take place at the marriage supper of the Lamb.

“And the angel said to me, ‘Write this: Blessed are those who are invited to the marriage supper of the Lamb.' And he said to me, 'These are the true words of God.’” (Rev. 19:9).

Revelation 6 (Part 3): The Rider on the Black Horse - BrittGillette.com