Pundits and politicians who giggle and point fingers at people who dare refer to global governance display their ignorance, or their duplicity. The U.S. National Intelligence Council, and the European Union's Institute for Security Studies has just released a report called: Global Governance 2025: At a Critical Juncture.

Speth's belief was confirmed in November 2009 by Herman Van Rompuy, president of the European Union Council, who said "Global governance is the global management of our planet."

The United Nations Development Program, in its 1999 report, defines global governance to be "the framework of rules, institutions, and practices that set limits of the behavior of individuals, organizations and companies." 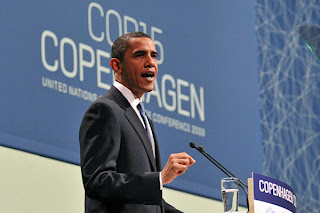 Dancing around the semantics is simply a diversion in an attempt to appease, distract or discredit the opponents of global governance. The indisputable fact is that global governance has advanced dramatically in the last two decades and is moving forward even faster under the Obama administration.

"[The] EU has sought to export its model of regional integration and sovereignty-sharing and has devised a distinctive discourse on global governance and priorities."

"Global governance requires giving over significant sovereignty to others – that is the view in China. …"

Any way you look at it, as global governance advances, national sovereignty evaporates. The report identifies three areas in which more effective global governance is badly needed and is likely to materialize: climate change and the environment, opening of the Arctic and the global economy.

Proponents of global governance expected the Kyoto Protocol to the Framework Convention on Climate Change to provide the structure required to impose global governance over global energy use. Their plan has not yet materialized, even though the proponents continue to work toward a treaty and an international mechanism with the power to control energy use.

The Convention on the Law of the Sea, and its International Seabed Authority, was supposed to be the treaty and the mechanism to control the use of the sea and its resources. Recent discoveries of enormous petroleum reserves in the Arctic region are sure to prompt ownership battles between the United States and Russia, unless proponents in the Obama administration and the Senate can get the treaty ratified.

The global economic meltdown in the last few years has forced the U.N. and other global governance enthusiasts to shift into high gear their plans to take over the global economy. First proposed publicly by the U.N.-funded Commission on Global Governance in 1995, it is their ultimate goal to have all international trade, international transfer of currency and international money flows under the direct control of a U.N. agency. Inherent in this dream is the authority to rake-off a percentage of the money flow as a global tax that would provide independent funding for the United Nations operation.

Whether it is recognized or not, global governance is here, here to stay and it is expanding rapidly. At the very least, global governance is the transitional step to unabashed global government. One of the most important obstacles that have yet to be overcome is the creation of an independent revenue stream. So far, the Obama administration has been very supportive of the U.N.'s plans to create this global economic regulatory mechanism.

The only power sufficient to stop this agenda is the power of American voters who care enough to turn out the current majority in Congress, in a dress rehearsal for turning out the current administration in 2012.

Waking up to a World Currency - The New American (Alex Newman)