A Catholic synod called at the Vatican to address the rising persecution of Christian in the Middle East wrapped up on Saturday with a joint statement that focused a lot of attention on demanding Israel end its “occupation” of Arab lands.

The gathering was meant to address the various acts of persecution, intimidation and discrimination that are resulting in a severe dwindling of Christian communities across the region.

But the bulk of the two-week meeting was spent discussing how Israel is the root cause of all the Middle East’s woes, including those faced by its Christians.

The final statement reflected that position. It listed the “occupation” of Arab lands, the building of Israel’s security barrier, military checkpoints, the jailing of terrorists (defined in the statement as “political prisoners”) and the general disruption of Palestinian life as some of the main reasons behind the exodus of Palestinian Christians and Muslim attacks on the Jewish state. 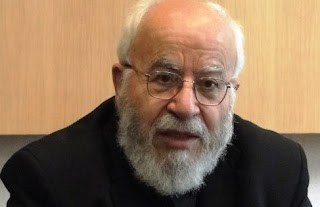 Cyril Salim Bustros, the Lebanon-born Greek archbishop of Our Lady of the Annunciation in Boston, Massachusetts was responsible for delivering the final statement.

In clarifying remarks, he stated that “the Holy Scriptures cannot be used to justify the return of Jews to Israel and the displacement of the Palestinians, to justify the occupation by Israel of Palestinian lands.”

He then escalated the situation by declaring that the original promises made by God to the children of Israel “were nullified by Christ. There is no longer a chosen people.”

Bustros rejected the idea of Israel as “the Jewish state,” and insisted that eventually all the so-called “Palestinian refugees” must return to the land, a sure recipe for the demographic destruction of the world’s only Jewish nation-state.

Mordechai Levi, Israel’s ambassador to the Vatican, decried Bustros’ comments and the damage they had done to strengthening ties between Israel and the Church.

The Catholic Church has for years been trying to repair its image as an institution steeped in anti-Semitism. But Bustros’ remarks make fairly clear that the Vatican remains as dedicated as ever to replacement theology - that teaching that says God has tossed aside the Jews, despite is irrevocable promises to them, and that “the Church” has instead inherited those promises.

[EDITOR’S NOTE: Once again we learn that the leaders in the Catholic Church are anti-Semitic in every way! Do any of these leaders read the Bible at all? How utterly ridiculous are their words that our blessed LORD YESHUA, the Messiah of Israel, would cancel God’s EVERLASTING covenant with His people! This is utter nonsense at its best, and blasphemous at its core! May God open the eyes and hearts of all Catholics to such matters!]

Israel Through The Eyes Of Scripture: The Church In Relation To Israel - SpiritandTruth.org (Tony Garland)

What is replacement theology / supersessionism? - GotQuestions.org