Able Men, Such as Fear God, Men of Truth

There is excitement about the prospects of the November elections. Many believe there will be such a turnaround in the House and Senate that the failed policies of this Administration will be repealed, reversed and retracted. I am not so sure. The composition of the party control may change. But if the recent past is any indicator, there are many in each party that are indistinguishable from one another - they support the same things. Indeed, the November election will not cure, nor even begin to cure, the $14 trillion debt that this Congress and White House have run up in your name, your children's name and your grandchildren's name. I am saying that any move away from this socialism is going to take a while. 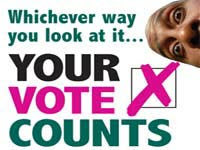 Christians across the land must understand that the nation is not in the shape it is in because of politicians. It is in this degraded condition because of the people who elect the politicians. In this country, we have a choice of our rulers, and as Christians we should be choosing candidates that align with God's word. Trouble is, the two party system that has become the norm, often chooses candidates that are so similar that many voters are placed in the precarious position of choosing between what we call "the lessor of two evils." This is why we must get involved at the local level. Get involved by becoming members of the central committees of the parties and have a say in the candidate selection process.

We also must get active about the judiciary and legal process. St. Augustine once wrote that an unjust law is no law at all. How many laws do we need? How many laws are unjust? How many judges are unjust? A law is unjust when it does not match up with the laws of God. America's system of government was derived from the system put in place during the Exodus from Egypt. Genesis 18:21 describes the system:

"Moreover thou shalt provide out of all the people able men, such as fear God, men of truth, hating covetousness; and place such over them to be rulers of thousands, and rulers of hundreds, rulers of fifties, and rules of tens."

This was the organizational principle on which the entire government of the United States was predicated. We see in this the system of representation how the Founding Fathers established the forms of government from federal - Executive, Judicial and Legislative bodies - to the state and the local systems of government. There was a requirement, however, in administering these laws. Those in leadership positions needed to be "able men, such as fear God, men of truth, hating covetousness." In other words, moral and Godly people were to be in charge of administering the laws. This is where we have failed in contemporary Christianity in not ensuring the character and quality of our lawmakers. Let us begin again now.

Politics - According to the Bible: A Comprehensive Resource for Understanding Modern Political Issues in Light of Scripture - Wayne A. Grudem (Book)