As Hurricane Earl barrels down on the East Coast reminding Americans God’s foreign policy of Genesis 12:3 is still effectually intact, smoke signals are hovering over 1600 Pennsylvania Avenue. Several Mideast leaders have converged upon Washington to discuss the prospects of "Direct Talks" for peace. President Obama, who pollsters suggest may be losing Democratic control of the House and possibly the Senate come November, 2010, wants a signed peace–pact between Israel and the Palestinians.

Although this peace–pact concept hints of the biblical false covenant prophesied in Daniel 9:27, it presents different time tables that dismiss it from having prophetic implications. However, this round of peace talks may prove to be prophetically critical. Rumors of war in the Middle East have risen to an unprecedented level. One wrong move could send potent missiles flying in multiple directions.

President Obama has invited a cast of moderate leaders to encourage “Direct Talks” toward Middle East Peace. They include Prime Minister Benjamin Netanyahu of Israel, former Prime Minister Tony Blair of the UK, King Abdullah II of Jordan, President Hosni Mubarak of Egypt, and President of the Palestinian Authority Mahmoud Abbas. Together they plan to construct a one- to ten-year path to Mideast peace. 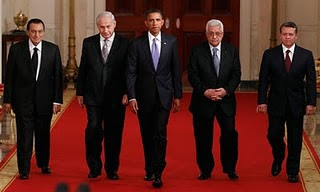 Although this is an interesting crew of leaders, what’s intriguing is the fact that Israel’s more threatening enemies aren’t participating. The leadership of Iran, Syria, Lebanon, Hezbollah, and Hamas, who have bona fide war pacts in place against Israel, are still up to their wartime antics back in the Holy Land. In fact Hamas, the democratically elected leadership of the Palestinians since January, 2006, has vowed to disrupt direct peace talks.

The primary prohibitive obstacles to this round of peace talks are:

The Bible prophetically addresses all of the above. Regarding Israel’s primary enemies - Iran, Syria, Lebanon, Hezbollah, and Hamas - these nations and/or terrorist turned political organizations are involved in the end time wars of Ezekiel 38 & 39, Isaiah 17:1, and Psalm 83. Iran comes against Israel in Ezekiel 38, Syria is involved in Isaiah 17:1, and Syria, Lebanon, Hezbollah, and Hamas confederate against Israel in Psalm 83. At some point soon these wars will occur nullifying any present peace proposals attempting to further the Mideast peace process along.

Regarding Jerusalem, most Bible translations reference Jerusalem at least 764 times and in most cases promote it as the holy city of Israel. Daniel 9:24-27 calls it the holy city of the Jewish people and predicts a third Jewish Temple will someday be constructed there. That day appears to be near. Presently, temple instruments are being constructed, priests are being prepared, and blueprints are being drafted toward this end.

The Palestinian Refugee crisis exists in breach of God’s Roadmap Plan of Jeremiah 12:14-17. This plan required resettlement of the Arabs occupying Israel at the time of the worldwide regathering of the Jews in 1948 to present back into the ancient homelands of their ancestors. At the time the land was called Palestine and the Arabs dwelling there became refugees as the result of the Arab–Israeli War of Independence. Presently, there are millions of these refugees caught in the geopolitical crossfire between Israel and the bordering Arab States. Israel seeks their resettlement into the Arab States and the Arab States press for the refugee’s right to return into Israel proper.

The Promised Land matter dates back 4,000 years ago to Genesis 15:18. Land between the Nile River of Egypt and the Euphrates River of Iraq and Syria was promised to the Israeli patriarchs Abraham, Isaac, and Jacob. According to the Bible this is Jewish land. Additionally, scriptures in Jeremiah 49:1-2, Obadiah 1:19-20, and Isaiah 19:16-18 declare that Israel will capture portions of these lands that are presently possessed by Jordan, Syria, Egypt, Lebanon, Hamas, and the Palestinians. All of these are grouped together in the Arab confederacy of Psalm 83:6-8.

Most importantly, the prophetic word of God is not being considered amongst all the parties assembling in Washington. Apart from the slight possibility that Benjamin Netanyahu might have some basic biblical awareness of the prophetic brevity of the matter, it is highly doubtful that any of the other leaders, including Barack Obama and Tony Blair, have any wisdom regarding God’s foreign policy of Genesis 12:3 or any of the other biblical precepts above.

Genesis 12:3 teaches that Israel is to be blessed rather than cursed. It promises benevolence to the parties that bless Israel. Conversely, cursings await those who oppose or oppress biblical Israel. Forcing Israel to trade Promised Land inclusive of Jerusalem, for a prospective peace with the Palestinians, can in no way be construed as blessing the Jewish State. It proposes the shrinkage, rather than expansion, of the coming greater Israel foretold to come in the Bible. However, this does not rule out the possibility that a Mideast peace accord might be achieved, but it will be short lived. God has plans for those countries surrounding Israel who seek to eliminate (curse) the Jews, homestead the Holy Land, and control Jerusalem, and He will carry it out according to his timetable.

Ezekiel 28:24-26 declares that Mideast peace is achieved through a series of judgments forthcoming upon Israel’s neighboring enemies. These judgments employ military rather than political means to resolve the present conflict. I write about how these judgments are executed through the might of today’s Israeli Defense Forces in my book Isralestine, The Ancient Blueprints of the Future Middle East.

Taking all the above into consideration, the present political attempts to craft a lasting peace between the Israelis and Palestinians are most likely doomed to fail. One has to wonder what the dignitaries are smoking in their peace pipe that causes them to think they can negotiate around Israel's primary enemies listed above. Thus, the Washington meeting will probably prove to be nothing more than a smoke screen. Mideast matters are rooted deep into the ideologies of Zionism and Palestinianism and there is no quick one- to ten-year fix likely to resolve the present Arab-Israeli conflict.