President Obama Declares US Combat Mission in Iraq Over

Addressing the nation from his oval office at the White House in prime time, President Obama said that after 7 years of war the US combat mission in Iraq was over, a decision that is in the best interest of both Iraqis and Americans and that this is a time to turn the page on this event in history.

The president said Americans share with the Iraqi people a belief that out of the ashes of war a new beginning could be born in this cradle of civilization. 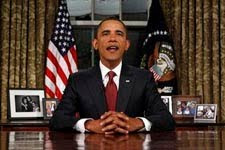 Even though President Barack Obama declares the US combat mission in Iraq over, there is a major war yet to be played out in Iraq according to Bible prophecy.

From the Oval Office at the White House, President Obama told the world that the US combat mission in Iraq is over which marked the formal transition of security in Iraq. Even though President Obama said this move was in the best interest of both Americans and Iraqis, many military leaders in Iraq are saying this was a premature move on the part of the US government.

As the last US combat troops were pulling out of Iraq, there was an uptick of violence in this war torn nation as elements of the insurgency moved to fill the vacuum left by the US pullout. This is evidence that military activity is not over for Iraq which is also confirmed by the end times scenario that can be found in Bible prophecy.

Iraq, Biblical Babylon, is a major player in Bible prophecy as recorded in Revelation 18 where it tells us that this area will be the economic, political, and governmental capital of the world headed up by the world dictator, the Antichrist. At the end of the seven year Tribulation Period of judgment, the Messiah, Jesus Christ, will return and destroy this Satanic capital in Babylon, modern day Iraq, Revelation 18:10, 17, 19 and Isaiah 13-14 and Jeremiah 50-51.

Though US troops have pulled out of Iraq, the seven year war did indeed set the stage for Bible prophecy to be fulfilled.

As U.S. Troops Move Out Of Iraq, Oil Companies Move In - Forbes (Blog)

US to Lead 15 U.S. companies on Trade Mission to Iraq in October - Reuters