The controversy over the Ground Zero mosque should be over and yet it is raging more heatedly than ever. The New York political establishment has lined up solidly behind the mosque, and the mainstream media is busy telling the uninformed that anyone who opposes the mosque is an enemy of religious freedom, a bigot, a racist, and probably a torturer of cats to boot, unwelcome in the company of decent people.

The only problem with this scenario is that the American people refuse to accept it — as illustrated by the thousands who attended the September 11 Rally of Remembrance against the Ground Zero mosque. 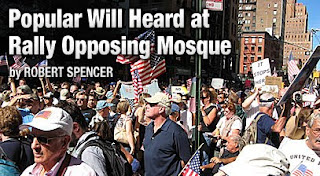 And in a striking twist, Coptic Christian activist Joseph Nassralla left the crowd spellbound with an impassioned account of the Muslim persecution of Copts and the dangers of the Islamic law that is so forthrightly defended by the “moderate” Ground Zero mega-mosque imam, Feisal Abdul Rauf.

Nassralla gained national attention last June at the first rally Geller and I held against the Ground Zero mosque, when Keith Olbermann and other hard-left journalistic ideologues misrepresented a misunderstanding between Nassralla and some others in the crowd as a racial incident that supposedly proved that those who opposed the mosque were all racists. Indeed, many news outlets ignored the rally altogether except to note the alleged brutalizing of Nassralla.

One might have thought that Olbermann and the other journalists who featured Nassralla’s story might have been interested in telling their audiences that the same man did not come away from the June incident believing that all mosque opponents were racists, and that he also was a featured speaker at Saturday’s rally against the mosque. But none of the mainstream media accounts of the rally mentioned Nassralla’s presence at all.

Even fewer mentioned the rally itself. When they did, they minimized the size of the crowd, and invariably stated (contrary to the testimony I heard from numerous eyewitnesses on the day itself) that the pro-mosque counter-demonstration that was going on at the same time was larger.

One would think an appearance by Europe’s most controversial politician — Wilders — and America’s most controversial journalist — Breitbart — would have been newsworthy in itself. Add in two wildly popular radio hosts — Gallagher and Malzberg – and a host of other passionate, effective speakers, and the media blackout becomes even more extraordinary. Clearly, it was agenda-driven — part of a larger ongoing effort to sway public opinion onto the side of the Ground Zero mosque.

But the rally that the mainstream media seems so determined to ignore or minimize itself shows the cracks in this edifice. There is an ever-widening gap between the goals and agenda of the political elites, and those of ordinary Americans. And Americans are becoming more aware of that widening gap. The smearing of the 70% of Americans who oppose the mega-mosque as racists and bigots reflects the increasing estrangement between the goals of the elites and those of American citizens who are being shunted aside, ridiculed and scorned.

Left without a voice in the mainstream, their voices silenced and their positions misrepresented, these Americans are increasingly seeing that “objective” journalists are anything but. Government is no better: politicians hide their corruption and statism behind populist rhetoric, and even the most daringly politically incorrect pols dare not risk standing side-by-side with too many people thus tainted, whether that taint was obtained justly or unjustly.

And so it is up to us. It’s increasingly clear in the Age of Obama that we cannot depend upon our government to defend American principles and values, and we can’t depend on the media to depict incidents fairly. We must take matters into our own hands — not in terms of vigilantism, but in regard to speaking out for those principles and values, and not resting until our voice is indeed heard. The rally and the ongoing controversy over the Ground Zero mosque show the weakness of the mainstream “politically correct” position. The mainstream media endlessly beats Americans over the head about the “moderate” Ground Zero mosque, and yet fewer people believe it than ever.

Countering the Lies of the MSM: The Ground Zero Mosque War in the Information Battlespace - Big Journalism (Pamela Geller)