A little girl once asked her father, “Daddy, do all fairy tales begin with ‘Once upon a time...’?” Her dad thought for a second and responded, “No, Sweetheart. Sometimes they begin with ‘If I’m elected, I promise…’.”

To say that politicians lie is like saying that water is wet. But I wonder… do liars become politicians? Or, do politicians eventually become liars?

Well, I’m sure there are truthful politicians out there… somewhere. But they’re about as rare as the Northern Hairy-Nosed Wombat. And here in America, it appears that the voting public has just about got its stomach-full of politicians who promise to legislate for the betterment of the people, but once elected, end up only focusing their agenda on their own perpetuity in office. “Fire Congress!” billboards and bumper stickers are popping up around the country. Perhaps more than any other time in recent history, the citizens of this great land are standing up and expressing their discontent with the politics of America.

I have listened to and participated in numerous discussions about the destructive path our nation is on. I assure you… I am just as concerned as others about our rising national debt, big government, out-of-control spending, government take-over of private industry, etc. But exactly WHO is at fault here? Unless we recognize and define the problem, there is no way that we can solve it.

Many people are blaming President Obama for the horrible mess we now find ourselves in. And surely, as the President, he is the one elected politician that has had the most control over the major decisions affecting our country in the last couple of years. But Obama is not the problem! He is the result of the problem!

President Obama is just one man. He may have a very large “support group” helping him… maybe even some that are unknown to the general public… but he is still just one person in a citizenry of over 300 million. But the really scary thought is that the majority of the voters in the United States of America could not see (or did not care about) where he would lead our nation as president and voted for him. This exposes the real national crisis… the real root problem of our nation.

As a US senator in 2007, Mr. Obama had the most liberal voting record in the whole Senate.1 Add to this his questionable associations throughout his political career, his less-than-clear birth records, his dubious family background, his UNchristian positions on moral issues (homosexuality, abortion, etc.) and his inexperience in management positions and military service, and there were plenty of reasons to NOT vote for him. He was and is a career politician with no practical experience in critical areas like economics, military, foreign affairs, agriculture, industry and commerce.

So, why would the American public elect such a clearly unqualified man to the nation’s highest office? As stated earlier, the answer reveals the real problem. 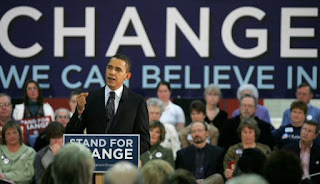 As a career politician, Mr. Obama did what politicians always do. He promised “change” from the Washington “politics as usual”, another “fairy tale” that people accepted as truth. But more than that, he also promised greater government provisions to the “working class” (government health care, a “Robin Hood” redistribution of wealth, etc.). Of course, to deliver on such promises requires greater government intrusion into Americans’ private lives, more taxes to pay for those provisions, and generally more control over every tax-paying citizen.

A quote attributed to Alexander Fraser Tytler may shed some light on where this is leading America. He said:

“A democracy cannot exist as a permanent form of government. It can only exist until the voters discover that they can vote themselves largesse from the public treasury. From that moment on, the majority always votes for the candidates promising the most benefits from the public treasury with the result that a democracy always collapses over loose fiscal policy, always followed by a dictatorship. The average age of the world's greatest civilizations has been 200 years.”2

I pray that he is wrong, but I fear that he is not. Have we reached that point in our national existence where the politician promising the largest government “entitlement programs” is always elected? Or, as Tytler said, have we now reached a point where voters have discovered “that they can vote themselves largesse from the public treasury”? It certainly appears that we have because we are in the process of collapsing “over loose fiscal policy” (unbridled government spending to provide that “largesse”).

A study of OT history tells us that when God judged nations, even the nation of Israel, He would often do it through the god that those nations worshipped. God’s first Exodus plague upon the Egyptians afflicted the waters of the Nile River, turning them into blood because the Egyptians worshipped the god of the Nile. Likewise, we might speculate that since money (materialism) is the god of America, if (or when?) God judges this nation, He will do it through economic collapse.

The means through which God judges a nation is spelled out in Romans 1. There, we see that often God will judge a people by incrementally removing His hedge of protection and restraint of their sin as they continue in their rebellion and refuse to repent (Rom. 1:24, 26, 28). Thus, He allows their own sin to destroy them.

It appears that God is allowing our own greed and selfishness to judge us. Our sin is placing an unsustainable burden on our economy that will eventually cause it to burst like an overinflated balloon.

Another interesting quote, dubbed the “Fatal Sequence”, was made by Henning Webb Prentiss in 1943. He said that such national selfishness leads to apathy and dependency, and eventually bondage:

“The historical cycle seems to be: From bondage to spiritual faith; from spiritual faith to courage; from courage to liberty; from liberty to abundance; from abundance to selfishness; from selfishness to apathy; from apathy to dependency; and from dependency back to bondage once more.”3

So, as is always the case, the real problem is the heart of man. Jeremiah 17:9 says, “The heart is deceitful above all things, and desperately wicked: who can know it?” In Prentiss’ historical cycle, the upside begins with “spiritual faith” and leads to courage, liberty, and abundance. The downside of the cycle begins with selfishness which leads to apathy, dependency, and bondage. The United States is definitely on the downside. More and more, it appears that national judgment is coming in the form of economic collapse unless we return to our spiritual roots.

Since the sin of Adam and Eve in the Garden of Eden, the incorrigible nature of man is to commit sin. And without genuine repentance and renewed commitment to the ways of God, like leaven in the loaf, sin will ultimately lead the individual, a whole nation, and even the entire planet down a path of destruction.

So the real problem is not our president. He is only an expression of what is the real problem! The real problem is that the majority of our people, led by their own selfish desires, did not look carefully at (or were unconcerned about) Obama’s driving ideologies. To them, how his beliefs measured up to God’s unchanging standards were irrelevant. Selfishly, in pursuit of bigger government hand-outs, our people turned their back on the God Who founded this great nation. We have turned our back on the God Who gave our forefathers courage… the God Who gave our nation liberty... And the God Who has given all of us great abundance!

But unless we return to the beginning of that historical cycle and renew our faith in the God of Abraham, Isaac, and Jacob, we will surely see our selfishness carry us to apathy, dependency and bondage. God forbid!

May the present political “ground swell” that is demanding a change in our politics be undergirded with a spiritual change that will lead Americans to a committed faith in Jesus Christ. Else, like an ocean wave, it will crash on the shore and dissipate, leaving no permanent effect on the status quo. And, the inevitable “Fatal Sequence” will continue.